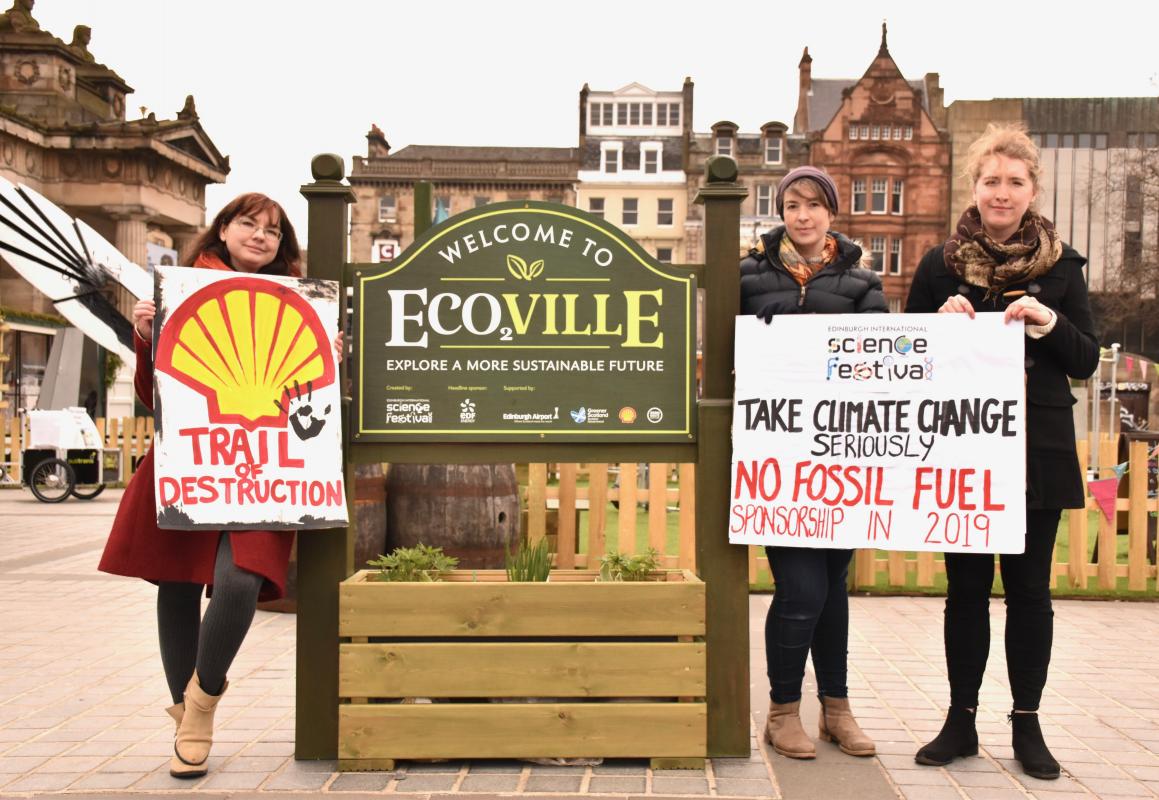 Sponsoring projects like the Edinburgh ‘eco-village’ is a way for companies to “cover up the climate crimes they are complicit in,” claim activists

THE EDINBURGH INTERNATIONAL SCIENCE FESTIVAL should drop all sponsorship from companies and concerns involved in the fossil fuel industry as of 2019, activists have argued.

On the afternoon of Thursday, 12 April, a group of activists attended EcoVille, described by organisers as a “family-friendly low carbon village” in central Edinburgh being run as part of the science festival, in order to present an alternative exhibition showcasing the history of the oil giant Shell, one of EcoVille’s major sponsors, along with EDF energy and Edinburgh airport.

Focusing on what they contend is Shell’s history of covering up climate science, human rights abuses, the suppression of protesters and the company’s “massive” contribution to global carbon emissions, the activists have argued that Shell’s “train of destruction” renders the company an inappropriate sponsor for a science festival.

Kate Whitaker of Friends of the Earth Scotland said ahead of the activists’ alternative exhibit: “Climate science very clearly shows us that we must start the phase out fossil fuel extraction, production and exploitation immediately, yet companies such as Shell have covered up this science for decades and continued their destructive activities, aggressively pursuing new oil projects across the world. Both Friends of the Earth Netherlands and New York City have threatened to take them to court over their climate-wrecking activities.

“While companies like Shell reap the profits of fossil fuel extraction, globally the poorest and most vulnerable communities are hardest hit by climate change.” Friends of the Earth Scotland campaigner Kate Whitaker

“A ShareAction report from 2017 shows that Shell’s business model puts us on track for three to five degrees average warming globally, despite the corporation claiming to support the Paris Agreement that states average warming must be kept well below two degrees.”

Whitaker continued: “While companies like Shell reap the profits of fossil fuel extraction, globally the poorest and most vulnerable communities are hardest hit by climate change.”

“Companies, such as Shell, use sponsorship of charities and cultural events like the Edinburgh International Science Festival as a way to maintain a social license, despite leaving a trail of destruction across the world. The science festival, and the EcoVille in particular, are perfect examples of how corporations use these events as a way to ‘greenwash’ their image and cover up the climate crimes they are complicit in.”

Responding to similar accusations that the oil giant was lobbying against climate science, Shell chief executive Ben van Buerden stated in 2014 that “climate change is real and a threat we want to act upon. We are not aligning with sceptics”.

However, precisely how much fossil fuel companies such as Shell have spent on lobbying efforts aimed at suppressing climate science is largely unknown, in part because they are generally not required to report their political and public relations spending.

The Edinburgh protest follows statements from earlier on Thursday from all seven Glasgow MPs, who have joined to advocate that the Parliamentary Pension Fund divest from fossil fuel companies in response to concerns over climate change.

“A transition to a low-carbon economy is important to ensure that we can properly protect the environment and reverse the effects of global warming.” SNP MP Alison Thewliss

Patrick Grady, SNP MP for Glasgow North, said: “The damaging effects of climate change are already being felt here in Scotland and across the globe. Now more than ever we need to take action to reverse global warming and protect our environment. This includes our investment decisions and it is only right that pension funds – especially those which manage public money – should always seek to invest ethically.”

Alison Thewliss, SNP MP for Glasgow Central, added: “A transition to a low-carbon economy is important to ensure that we can properly protect the environment and reverse the effects of global warming, for the benefit of future generations.

“With this in mind, It’s imperative that pension funds are invested in a responsible and ethical way. As such, I am very pleased to be able to sign the Divest Parliament pledge”.

Ric Lander, campaigner at Friends of the Earth Scotland, also commented: “Climate change is already affecting millions of people as rising seas and extreme weather destroy whole communities. We urgently need to cut our emissions – but this change won’t happen if our leaders continue to bet their pension on companies who will lose out if we go green.”

In addition to the seven Glasgow MPs, 155 current and former MPs have backed the ‘Divest Parliament’ campaign, including 12 other cross-party Scottish MPs from the SNP, Labour and the Liberal Democrats.

These investments, campaigners say, go against the spirit of the UK Government’s ostensible commitment under the Paris Agreement to keep global warming beneath 2C.

Additionally, recent analysis by Friends of the Earth Scotland showed that Scottish Council Pension Funds have also invested £1.8bn into fossil fuel companies, with Scotland’s largest, the Strathclyde Pension fund, having invested £803m, or 4.1 per cent of its total fund.

Earlier in April, several of the world’s leading climate scientists joined together to urge Scotland to adopt a new, more ambitious target to cut carbon emissions in an effort to prevent further climate change.

In a joint-letter to the Sunday Herald newspaper coordinated by WWF Scotland, professors from Edinburgh, Aberdeen, Oxford, Cambridge and London called on the Scottish Government to aim for “net zero emissions for Scotland by 2050 at the latest”.

While the Scottish Government has been committed to reducing emissions by 80 per cent by 2050 for some years now, it has recently increased that commitment to 90 per cent, with First Minister Nicola Sturgeon reportedly indicating that she may announce further action soon.

A Scottish Government spokesperson said: “We support the Paris Agreement aspiration for global emissions to reach net-zero levels during this century. We are considering responses to our consultation on the climate change bill and will shortly set out our proposals to increase our long-term ambition even further, in direct response to the Paris Agreement.”

Gabi Hegerl, Professor of Climate System Science at the University of Edinburgh, argued: “Scotland is well placed to lead this transformation, as we have good resources of renewable energy. For the sake of ourselves, and our children, lets generate the energy we need from other sources now.”

Picture courtesy of Kate Whitaker, Friends of the Earth Scotland