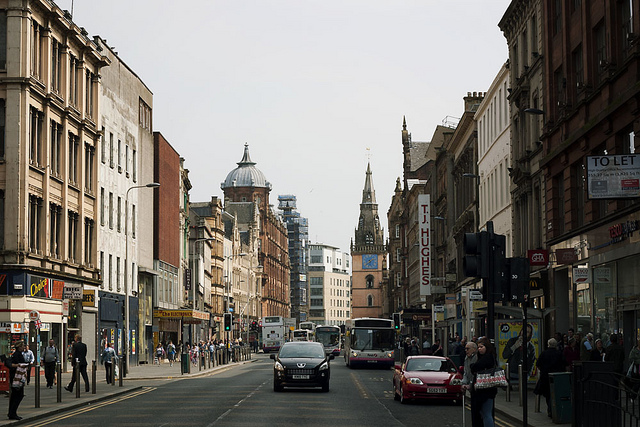 CAMPAIGNERS with the socialist coalition Rise have engaged in a 24 political occupation of 190 Trongate in Glasgow to highlight the “unacceptable” state of housing in Scotland.

Taking place on 10 December to mark Human Rights Day, Rise activists temporarily occupied the building as part of Rise’s ongoing campaign to bring attention to the impact of land-banking and “property gate-keeping” on Scottish working-class communities.

Land-banking in the widespread practice under which land is purchased and left vacant by the new owners, with the eventual aim being future sale or redevelopment. Rise, which argues such land should be used for the public benefit, has been consistently opposed to land-banking, and noted in a public statement released on their website that although 190 Trongate has been renovated to allow for residential dwelling and retail space, it has apparently never been let out.

“We stated that unless these properties were used in a manner that would directly benefit our communities we would take actions to ensure that they were.” Rise statement

Announcing their occupation, Rise also noted the history of 190 Trongate, which was built on the site of Shawfield Mansion, which was sacked by Glaswegian rioters in 1725, following the imposition of a tax on Scottish malt, with several civilians killed by soldiers as a result.

The statement from Rise continued: “We stated that unless these properties were used in a manner that would directly benefit our communities we would take actions to ensure that they were.

“We feel that present circumstances force us to focus on the pressing housing crisis and struggles people are facing whilst homeless. We commend the great work done by homeless charities and outreach groups, who are providing invaluable help and support to people in our communities.

“We believe it is imperative to support the work being done by people on the frontline by demanding that society tackles the root causes of homelessness and insecure housing. It is time to take direct political action to further highlight these issues.

“We invite politicians from all parties, Glasgow city council and those who work on the front line of homeless services to come down and provide support to anyone who may seek shelter during the occupation.” Rise statement

“If this action does not provide the appropriate political stimulus to ensure that everyone is housed during the winter months we are fully prepared to repeat these tactics and others until we feel appropriate action has been taken.”

In explaining the rationale for their latest action, Rise pointed to recent Scottish Government figures from September 2016, indicating that there are 35,727 residential properties in Scotland that have remained vacant for more than six months, and compared this to the 34,100 homeless applications made between 1 April 2016 and 31 March 2017. Rise argues that, due to the commensurate number of vacant properties, the majority of those in Scotland facing homelessness could be housed over the winter months.

Common Weal head of policy Ben Wray responded to Barclay’s criticisms, saying: “How does she [Barclay] explain nine UK house builders in the FTSE 100 and FTSE 250 owning 615,152 housing plots of land as of December 2015, which if used would quadruple the number of houses built that year?

“Perhaps they have used them all since then? Or maybe none of the plots are in Scotland?”