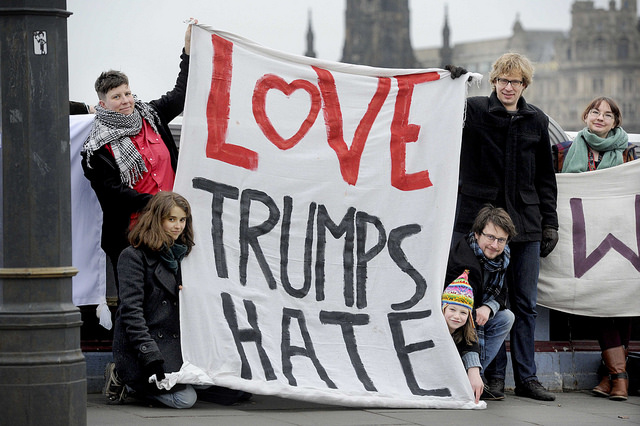 A POSSIBLE visit to Scotland by US President Donald Trump will trigger “a monster response”, as anti-Trump activists and politicians prepare to announce details of demonstrations around the country.

Following reports that Trump was likely to visit Scotland during his trip to the UK this summer – the full itinerary for which has not yet been finalised – groups and figures opposed to the policies and presence of the US president have kicked into high-gear.

It has been confirmed that Trump will arrive in the UK on 13 July, and that during his visit he will meet with the Queen, as he was reportedly promised during Prime Minister Theresa May’s visit to the White House last year, despite it not being an official state visit.

In January of this year, Trump expressed his regret at having been unable to visit Scotland since becoming president, describing the nation as “a very special place” with “very special people.”

Opposition to any potential Scottish visit by Trump is likely to be spearheaded by the Scotland United Against Trump coalition, founded in February by a variety of organisations and individuals, including officials from trade unions Unite, Unison, the CWU and the GMB, as well as campaign groups such as Stand Up to Racism and the Muslim Council of Scotland, Scottish Green co-convener Patrick Harvie and Scottish Labour leader Richard Leonard.

“We are going to build a carnival of resistance to Trump – and send a strong message that we stand with the movements in America who are fighting every day against his policies.” Activist Jonathon Shafi

The Scottish activist and board member of the New Foreign Policy think tank Jonathon Shafi told CommonSpace: “Last year at 24 hours’ notice, Scotland United Against Trump mobilised up to ten thousand people to protest the Muslim flight ban. This year, we expect Trump will visit Scotland and we expect a monster response  – it could be the biggest mobilisation north of the border since the Make Poverty History protest in 2005.

“We will be teaming up with a coalition of unions, campaigners, anti-racist organisations, women’s groups and political parties to deliver the biggest possible opposition to his presence in the country.

“Laughably, some Tories have said Scotland could be a safe haven from protests. Details of events will be advertised soon. We want everyone to be involved – young, old, families and first-time marchers.

“We are going to build a carnival of resistance to Trump – and send a strong message that we stand with the movements in America who are fighting every day against his policies, which are designed to enflame bigotry and transfer yet more wealth to the one per cent.”

As noted by Shafi, a group of British conservatives – including the heads of right-wing think tanks the Bow Group, Bruges Group, Parliament Street and the Freedom Association, as well as the chairman of Republicans Overseas Scotland – wrote to the US president following the announcement of his UK visit, urging him to avoid London and to visit his “ancestral home” of Scotland in order to avoid “major protests, crime and disorder”.

Commenting on the possibility of Trump visiting Scotland, Richard Leonard said: “There is a lot of anger at the prospect of Donald Trump coming to Scotland and a strong resolve to show that he is not welcome here.

“If Donald Trump does indeed travel to Scotland, the whole of civic Scotland is ready to tell him that he is not welcome here.” Scottish Labour leader Richard Leonard

“It is my view, and that of the Scottish Labour Party, that someone who holds such misogynist, racist and anti-trade union views, not to mention his dangerous approach to foreign policy, and someone who rejects the Paris Climate Change Agreement, should not be given the ‘red carpet’ treatment.

“That is why Scottish Labour is helping to lead the Scotland United Against Trump campaign to ensure there is a mass protest if Trump does visit.

“If Donald Trump does indeed travel to Scotland, the whole of civic Scotland is ready to tell him that he is not welcome here.”

SNP MSP Christina McKelvie told CommonSpace that she would be participating in potential protests against Trump, should he come to Scotland, saying: “Mr Trump adheres to a set of ideas – I cannot say principles – that Scotland neither shares or wishes to share. His presence here will be unwelcome for the vast majority of our people.

“The concept of human rights has always been upheld here, particularly in the Enlightenment. Scots do not support Trump’s misogynist attitudes, his casual chauvinism, racism and dismissal of labour rights. I will certainly be out there to show my clear allegiance to those universal principles of equality on race, colour, gender and sexuality.”

Pat Rafferty, Scottish secretary of the Unite trade union, said in February of this year following the inaugural meeting of Scotland United Against Trump: “We are confident we can build an opposition coalition to Donald Trump so that he’ll know that should his feet touch the ground here he’ll know he isn’t welcome.”

First Minister Nicola Sturgeon has also been sharply and frequently critical of the Trump administration in the past, stripping Trump of his role as business ambassador for Scotland in 2015, prior to his election, in response to his proposed ban on Muslims entering the United States.

A spokesperson for the Scottish Government told the BBC: “Scotland has deep and longstanding ties of family, friendship and business with the United States, which will continue to endure.

“At the same time, we will not compromise our fundamental values of equality, diversity, and human rights and we expect these values to be made clear during the presidential visit to the UK.”