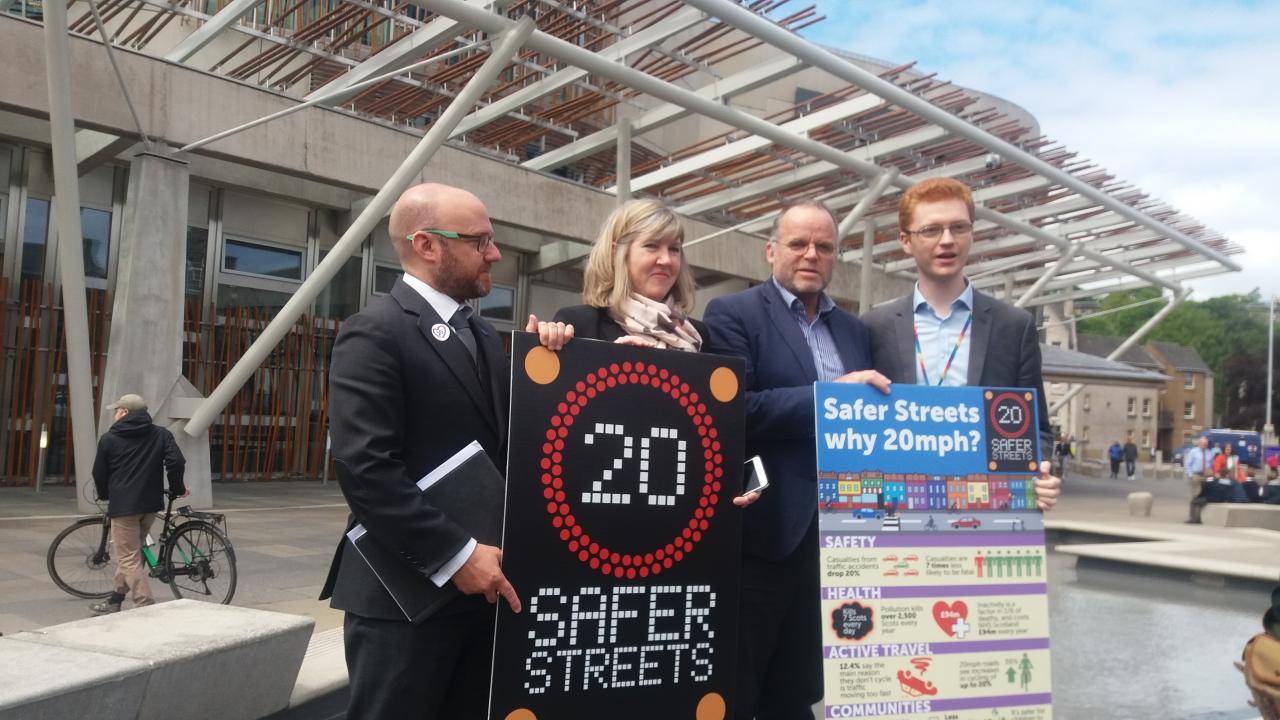 CAMPAIGNERS for a default speed limit of 20mph in all residential streets across Scotland today rallied outside of the Scottish Parliament, days before MSPs debate the proposal and vote on Green MSP Mark Ruskell’s ‘Safer Streets’ bill.

Included in the demonstration were representatives of Friends of the Earth Scotland, Cycling UK, Pedal on Parliament, Spokes Lothian, Go Bike and 20’s Plenty for Us. Joining Ruskell were his Scottish Green colleagues Andy Wightman, Ross Greer and party co-convener Patrick Harvie.

The demonstration saw 60 chairs placed outside of the parliament building, each one representing a life which campaigners argue could have been saved by a 20mph speed limit.

Speaking to CommonSpace, Mark Ruskell said: “Whenever 20mph is introduced, the evidence shows it does have a big impact. It encourages walking and cycling; it also cuts the accident rate, particularly in deprived communities. I think that’s a really important point here, because deprived communities face a double transport injustice. Not only do they have access to poor bus services [and] lack of car ownership, but are also reliant on walking and cycling and have a higher accident rate.

Speaking ahead of today’s protest, Sally Hinchcliffe of Pedal on Parliament said: “This legislation presents a perfect opportunity to make our towns and cities safer right across Scotland, eliminating the postcode lottery of safer streets for children walking or cycling. If MSPs don’t want to support this bill, we challenge them to tell us what measures they will enact that would reduce road danger for vulnerable road users as effectively as this.”

Gavin Thomson, air pollution campaigner at Friends of the Earth Scotland, commented: “This Bill is vital to making our streets healthier and safer. Our politicians have a chance to show that they’re ready to take action to face up to the climate emergency. This means making our roads safer so more of us can walk and cycle safely, and leave our polluting cars behind. It is shocking that MSPs are planning to put the need for motorists’ speed ahead of the need for public safety.” 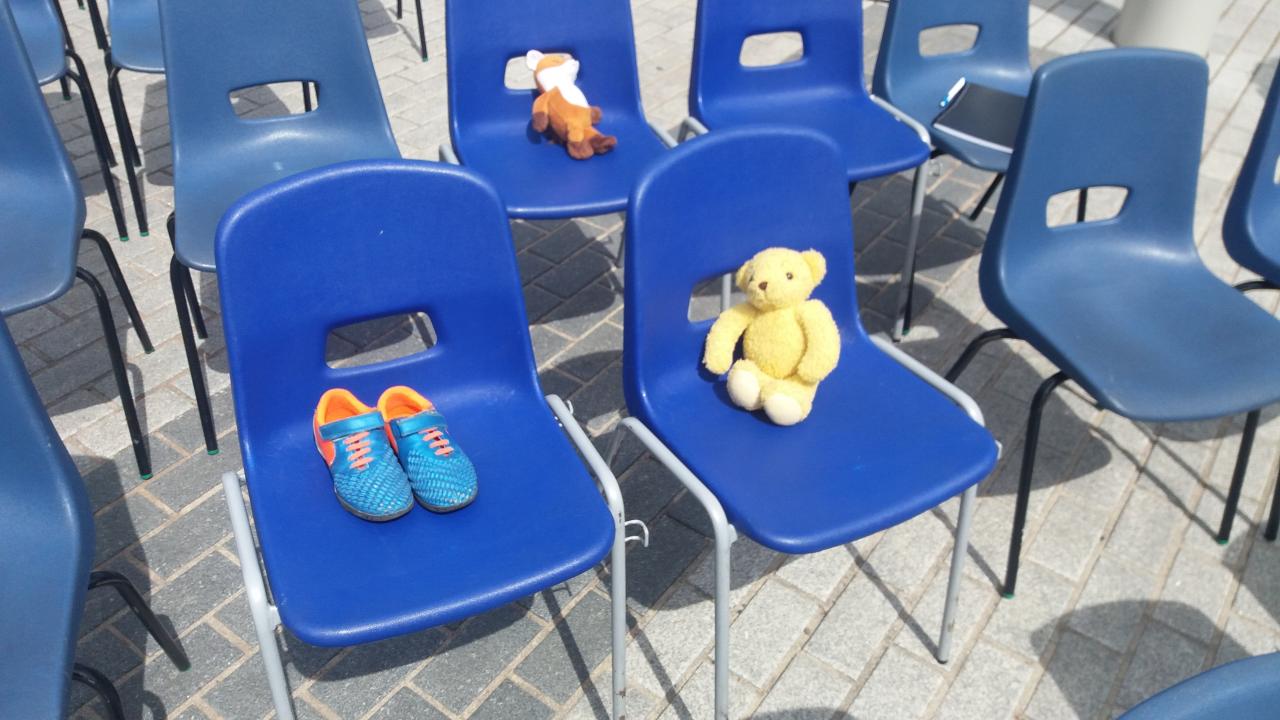 Duncan Dollimore of Cycling UK also commented: “Despite acknowledging the safety benefits of 20 mph limits, the Scottish Government seems to want to carry on regardless, leaving local authorities to decide whether or not to introduce lower limits.

“But had such a limit been introduced when the Scottish Parliament was founded, 60 families might have been spared the agony of losing a loved one in a road collision. They might ask, why won’t their Government lead and assume, rather than duck, responsibility?”

Dave du Feu of Spokes said: “The 20mph default limit in Mark Ruskell’s bill is no more ‘one size fits all’ than the present 30mph default limit – and both give councils the power to vary speeds up or down on roads they specify. However, what a 20mph default does fit is a safer and more pleasant place to live and to get around – for all.”

“We are calling on local authorities and government to implement more widespread high-quality infrastructure and slower speed in streets to make children and young people safer, especially in Scotland’s most disadvantaged areas.” John Donnelly of GoBike

John Donnelly of GoBike, the Strathclyde Cycle Campaign also said: “Many of our local authorities have supported this Bill, including the SNP lead Glasgow City Council. The cost that would be incurred by the councils, to implement the 20mph limit, was highlighted as one of the reasons not to support the Bill by the committee. However, Glasgow City Council has indicated the current approach, that requires them to go through the Traffic Regulation Order (TRO) process, is going to be much more expensive. Furthermore, it will take close to 15 years to enable the council to apply a 20 mph across the city at the current rate.

“Analysis by Sustrans found that children in Scotland’s poorest areas nearly 3 times more likely to be injured by road traffic. With almost half of Glasgow’s residents living in the 20 per cent of most deprived areas in Scotland, our children are at greater risks than many in other parts of the country. GoBike call on the Government to support this bill to make our roads safer for all, in particular those children who are already disadvantage by virtue of where they live.

Donnelly added: “We are calling on local authorities and government to implement more widespread high-quality infrastructure and slower speed in streets to make children and young people safer, especially in Scotland’s most disadvantaged areas.”

The protest follows the 31 May decision of Holyrood’s Rural Economy and Connectivity Committee  not to recommend approval of Mark Ruskell’s ‘Safer Streets’ private member’s bill, which would create a uniform 20mph speed limit for residential streets nationwide.

While the RECC argued that a ‘one size fits all’ approach was not appropriate to addressing the issue of traffic safety, dissenting MSPs John Finnie, Colin Smyth and John Mason rejected this conclusion, arguing that the current variety of speed limits across Scotland was confusing for motorists.

The 20’s Plenty for US campaign described to the RECC’s claim that a default 20mph limit would “would not give local authorities the flexibility to devise 20mph limits that they consider appropriate” as “factually untrue”, pointing out that the bill specifically excludes A and B class roads from changes, and includes flexibility for local councils to exempt any restricted U and C-class roads back to 30mph.

In a statement on their website, 20’s Plenty for Us argued: “It is not a ‘one-size-fits all’ approach. We contest this is a flawed and fatuous reason because it fundamentally misunderstands and misrepresents the Bill which aims at safer 20mph limits for the majority of residential (minor roads) not ‘all roads’.

“Further, the current 30mph default is a ‘one-size-fits all’ which isn’t fit for purpose because it fails public health, equality, the climate and isn’t popular – 71 per cent of the public reply that they want default 20mph limits.”

Ahead of the committee’s decision, Transport Minister Michael Matheson also expressed reservations with a default 20mph speed limit, questioning whether the implementation of the Safer Streets bill could divert resources away from existing road safety activity and arguing: “Changing a speed limit does not indeed guarantee that actual speeds will change”.