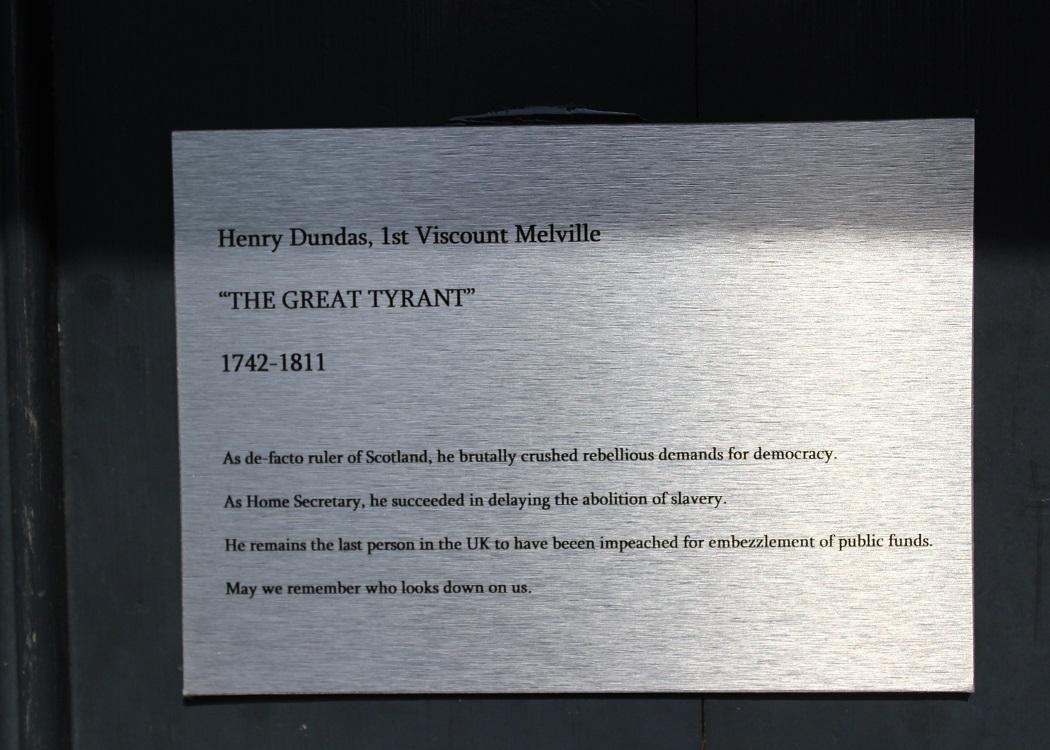 EDINBURGH is replete with stone psychopaths. On Sunday I glued a plaque to the bottom of the biggest of them. It seems important that we remember our past. In particular, it seems important that people know who this statue represents. And, in any case, the former first minister told me to do it. Let me explain.

The plaque, which I got engraved a few months ago, said the following:

As de-facto ruler of Scotland, he brutally crushed rebellious demands for democracy.

As Home Secretary, he succeeded in delaying the abolition of slavery.

He remains the last person in Britain to have been impeached for embezzlement of public funds.

May we remember who looks down on us

I had it made after the inaugural Thomas Muir memorial lecture last summer. Alex Salmond had spoken for an hour about the great 18th century Scottish radical , who had led the movement for democracy in Scotland.

Henry Dundas ruled over Scotland at the time, and Muir was tried by his nephew, and transported to Australia. It was seen as such an injustice that it prompted Burns to write ‘Scots Wha Hae’ in a subversive attempt to rally the country to the cause.

Yet, atop a vast plinth in the middle of St Andrew Square, at the heart of Edinburgh, is a statue of Dundas. And so at the end of the talk, I asked the former first minister if this monument to the criminal against whom Muir was organising should be removed. Salmond gave a typically erudite and interesting answer, which could have been summarised in one word. ‘No’. He didn’t think so. We should leave the statues of our villains up. We should just have bigger ones to our heroes.

We are shaped by our history. And unless we are willing to grapple with the brutality of it, we can never really understand our own present: who we are as a country and how we got here.

There was an obvious problem with this answer. It may be appropriate to leave stone carvings of mass-murdering psychopaths across our capital city to remind us that they too are a part of our past. But that only works if we are brave enough to acknowledge who they are. And on the Melville monument, as it is known, there is only one plaque: informing visitors that placing the statue on top of the plinth was the first ever use of a balancing crane in the world. Which is nice. But does rather leave the ‘who the hell is this guy?’ elephant in the square.

And such an understanding matters. We are shaped by our history. And unless we are willing to grapple with the brutality of it, with the simple facts of conquest and the slave trade and the mass slaughter across the world upon which our position in the world is built, we can never really understand our own present: who we are as a country and how we got here.

Henry Dundas is of course only a small part of that history. His crushing of democracy, extension of the transatlantic slave trade and use of Black Watch troops to enforce the Clearances, perhaps mark him out as a particularly heinous figure. But he’s one whose presence it’s hard not to feel as you walk around the capital – from the statue to Dundas Street to Melville Drive to the lounge room named after him in George Street’s Wetherspoons.

I guess a pub chain owned by a Ukip supporter having a room named for the man who saved the transatlantic slave trade shouldn’t be a surprise, but the fact that the road north from Edinburgh is named after a key figure in the Clearances does always seem somewhat ironic to me.

And so yesterday, I took the opportunity of a sunny Sunday after the election to take the plaque and, using a strange syringe full of glue, affix it to the door at the bottom of the monument. You have to hold the thing for 80 seconds as the glue dries, and, as I did so, the new MSP for Edinburgh Central, Ruth Davidson, walked past, giving me and my friends a rather confused look.

To walk around Edinburgh, requires endlessly being looked down upon by carvings of imperial mass-murderers; the administrators of a once vast and genocidal empire which ruled much of planet, driven by doctrines of racism, violence and plunder; slavery, forced-famine and theft. It’s a past we must escape from, but the first step will be, one day, to acknowledge it.