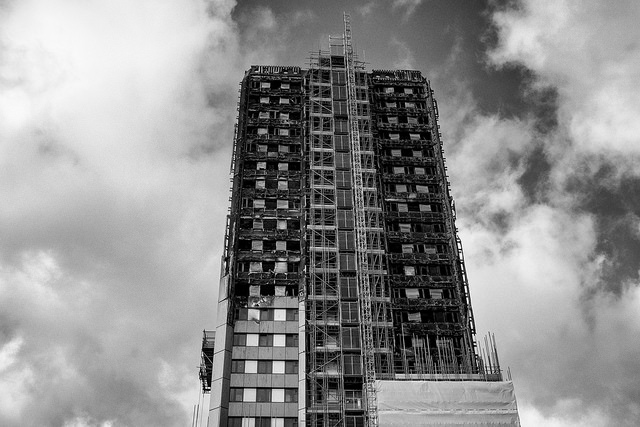 ALMOST 80 per cent of builders want to see the UK Government introduce a licensing scheme to weed out “cowboy” builders, according to research by industry body the Federation of Master Builders (FMB).

In a new report launched in the House of Commons on 9 May, FMB set out “a post-Grenfell agenda for quality and professionalism in construction” and asked the government to introduce a licensing system for all construction firms and mandatory warranties for Building Control-approved work.

FMB will also seek to develop and deliver a ‘general builder’ qualification to allow builders to “differentiate themselves over and above the requirements enforced by a compulsory licensing system”.

This comes almost one year on from the Grenfell Tower fire of 14 June 2017 which killed 72 people after the fire spread rapidly due to the external cladding on the building, which was not fire resistant. As a result, an independent review of building regulations and fire safety is being led by Dame Judith Hackitt, and an inquiry into Grenfell Tower will open in full on 4 June.

Brian Berry, Chief Executive of the FMB, said: “The Grenfell Tower tragedy reminded us of the price paid when things go wrong in the construction industry. Grenfell raised serious questions about standards, regulation and compliance within the construction sector and although we await the results of the Hackitt Review, we want to start a wider conversation about how we can drive up quality and professionalism in construction.

“Until we introduce a licensing scheme in construction, cowboy builders will continue to run rampant in our industry. Licensing would ensure a minimum level of competence and professionalism and give consumers greater assurance when hiring a builder. Unlike in the US and Germany, anyone can be a builder in the UK.”

Aside from the safety implications, Berry said such a scheme would be economically beneficial as FMB’s consumer research has identified that one third of UK home owners are “so anxious about hiring a dodgy builder” that they avoid commissioning building work altogether.

The average home owner, FMB’s research suggested, would spend around £40,000 on home improvement projects over the next five years if they were “guaranteed a positive experience with their builder”.

Scotland has seen its own scandals surrounding the construction industry in the form of the Edinburgh public-private partnership (PPP) schools, 17 of which were closed in 2016 amid concerns of poor construction after a wall at Oxgangs Primary School collapsed.

Earlier this month, a report into building failures in the DG One leisure centre in Dumfries found that repairs would likely cost over £19m – more than it cost to build.  Authored by Professor John Cole, who also investigated the Edinburgh schools, the report firmly laid the blame with building company Kier Construction Scotland and North East, and said this was “indicative of systemic problems” in the construction industry.

Calls for increased regulation of the industry have been backed by Malcolm Fraser, an award-winning architect and chair and author of the Scottish Government’s 2013 Town Centre Review.

Speaking to CommonSpace, Fraser said that, having discussed the issue with others in the construction industry, there was “widespread agreement that there is a big problem and that builders are let down by what FMB rightly describe as ‘cowboys’”.

Fraser said that people tend to “shy away from increased regulation” but that he felt there was a strong case for it. What this might look like, he explained, was the source of some debate, as some in the construction industry are concerned that an increased role for FMB may, in effect, lead to it becoming a quasi governmental body.

That being said, Fraser stressed that he agreed “in principle” with FMB’s proposals. “I’d like to see the government responding to it – the government should take reports seriously and talk about how it might be done, and consider using existing statutory bodies like Building Control to do this.”

Citing the Oxgangs and DG One cases as examples of how issues with “competent construction” have emerged “on a large scale in Scotland”, he added: “We know there are other examples on a smaller scale and these need to be addressed. Some government oversight and national oversight would assist with that.”

A motion arguing that the Scottish Government should establish a Scottish National Infrastructure Company to lead public construction work in Scotland to replace private finance and increase quality will be put to the SNP’s conference in June.