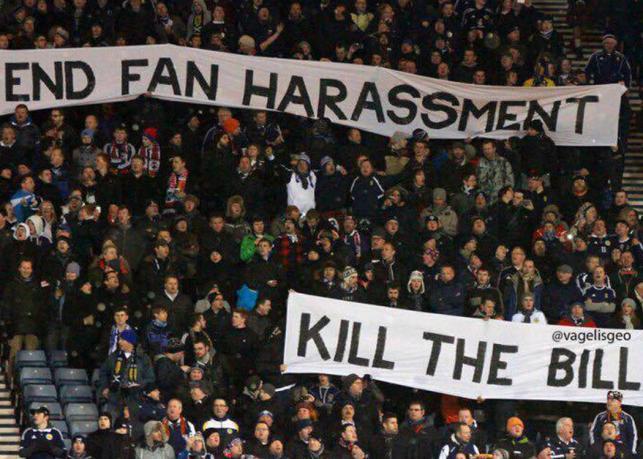 THE SCOTTISH GOVERNMENT should consider implementing Uefa’s ‘Strict Liability’ principles on Scottish football, whether by new legislation or by withholding millions of pounds of public funding, a leading anti-sectarianism campaign has argued.

The recommendation comes as the Scottish Parliament prepares to consider the final stage in the repeal of the Offensive Behaviour at Football and Threatening Communications (Scotland) Act, commonly known as OBFA, in a vote expected to take place at 5pm on 15 March.

The legislation, opposed by all four opposition parties represented in Holyrood and criticised by a number of legal experts, was intended to tackle the prevalence of offensive behaviour often linked to sectarianism within Scottish football.

READ MORE: Paul Quigley: It’s too late for the SNP on the Offensive Behaviour Act – it’s time to ditch it

However, the potential repeal of OBFA comes at a time of heightened tensions regarding the sectarianism in Scottish football, following reports from BBC Scotland that a number of current and former match delegates believe not enough is being done to tackle the problem. One unnamed former delegate stating: “It seems like the Scottish Professional Football League is content to sweep the issue under the carpet.”

Following these revelations, the anti-sectarianism campaign Nil By Mouth has argued that further action will still be required by the Scottish Government on sectarianism in Scottish football, regardless of whether OBFA is successfully repealed.

Speaking to CommonSpace, Nil by Mouth campaign director Dave Scott said: “Just as passing this Act didn’t make sectarianism disappear from our touchlines and terraces, repealing it won’t make the problem go away either.

“Given the revelations from whistleblowers within Scottish football over the last 48 hours that reports of sectarian behaviour from match delegates are routinely ignored by governing bodies we can’t allow the sport to ‘self regulate’ anymore.

“It’s time parliament gave real thought to ensuring Uefa’s ‘Strict Liability’ principles are fully implemented by clubs, either by legislation which is currently being prepared or by withholding millions of pounds of public funding into Scottish football until it gets its house in order.”

These comments echo those made by John Finnie MSP, justice spokesperson for the Scottish Greens, who said earlier on Thursday: “It’s clearer than ever that the Act has not been an effective way to address sectarianism. Many of the activities it aimed to tackle are already covered by other legislation.

“Football clearly has a particular issue with sectarianism and clubs must look again at the strict liability model which applies elsewhere in Europe. If clubs face losing points over sectarian incidents, they are more likely to help deter fans from undermining their teams.”

‘Strict Liability’ is a system employed by Uefa to tackle offensive behaviour at football matches, under which football clubs are responsible for the conduct of their fans, regardless of whether or not the clubs themselves bear direct responsibility.

“Football clearly has a particular issue with sectarianism and clubs must look again at the strict liability model which applies elsewhere in Europe.” Scottish Green MSP John Finnie

The system can include warnings, fines, annulment of match results, orders for matches to replayed, the partial or total closure of football grounds, the playing of matches behind closed doors and the docking of points.

Despite the likely repeal of OBFA, the Scottish Government has continued to back the law, with Community Safety Minister Annabelle Ewing saying: “I continue to believe that the repeal of the Offensive Behaviour at Football and Threatening Communication Act is foolhardy and sends out the wrong signal, particularly following a number of incidents over the course of this season where the shadow of sectarianism has again been cast over our national game.”

The problem of sectarian violence in Scottish football was further highlighted on 10 March, when a Rangers v. Celtic match scheduled for the following day was preceded by actions described by section of Rangers fans as “a march against the fenians”, which resulted in violent clashes in Govan between rival groups.

Commenting in the aftermath of these events, SNP MSP for Glasgow Cathcart James Dornan said: “If ever the need for the OBFA was highlighted it’s been this weekend.

“It appears the ‘imminent repeal’ of the Act has emboldened some of the worst to go more public with their intention to break the law.” SNP MSP James Dornan

“I’ve had implied physical threats on twitter, infantile abuse from grown men and utter bigoted whitabootery of the highest order from both sides of the Glasgow footballing divide.”

Dornan continued: “There’s no doubt in the last few weeks there has been an upsurge in blatant sectarian singing at games, and as you saw on Saturday, it appears the ‘imminent repeal’ of the Act has emboldened some of the worst to go more public with their intention to break the law.

“I urge every politician in the Scottish Parliament to ask themselves if this is the type of country they want to see portrayed to the rest of the world.”

Dornan went on to echo comments made by the unnamed delegates quoted by BBC Scotland, saying: “The football authorities have shown themselves to be either blind or too lily livered to take on the vested interests and have no intention of battling this head on therefore it has been left to the government.”

Nevertheless, opposition politicians remain resolute in their opposition to OBFA. Writing in CommonSpace on 14 March, Labour MSP James Kelly, who designed OBFA’s repeal bill, wrote: “If the Act was designed to tackle sectarianism, then it has completely failed. There is nothing to show for any decline in sectarian behaviour since the Act’s introduction.

“While the Act has been shamelessly defended by government ministers, the funding for anti-sectarianism initiatives has declined, as has the number of projects running to tackle bigotry.”