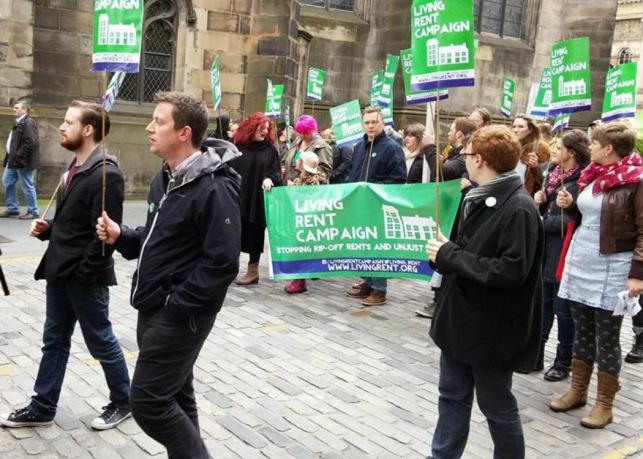 THE PRIVATE RENTED SECTOR (PRS) has tripled in size since the advent of devolution and its reversal is a goal that Holyrood should “triumph not fear”, argues a new report from think tank Common Weal.

Released ahead of Common Weal’s Housekeeping Scotland Convention on Saturday as part of the think tank’s long-term project to radically transform the Scottish housing agenda, the new study – ‘Alienated, insecure and unaffordable: Living in Scotland’s Private Rented Sector’ – makes the case for increased regulation of the PRS and the reestablishment of social housing as a universal service.

Built on data from the Scottish Household Survey 2016, published by the Scottish Government in September this year, Common Weal head of policy Ben Wray argues that the PRS is “uniquely insecure”, with 68 per cent of Scottish residents staying less than two years in one flat and 41 per cent staying less than one year. Compared to the average PRS stay of 2.8 years, people resided in social housing for an average of 10.6 years.

“The idea that social housing is only for the poor creates an unnecessary stigma around for those living in the sector.” Common Weal report ‘Alienated, insecure and unaffordable: Living in Scotland’s Private Rented Sector

Due to this among other factors, there is a large and unsatisfied demand within Scotland’s PRS for social housing, with 40,000 PRS residents (11 per cent) on a social housing waiting list. Of that number, approximately 5,000 have been on that waiting list for more than a decade, despite nearly a third of them being unable to afford their current housing, and over a tenth being threatened with homelessness.

While the report acknowledges that it is too early to judge the effectiveness of recent Scottish Government legislation on security of tenure and rent pressure zones, Common Weal nonetheless argues that the government could achieve more through the introduction of wide-ranging regulatory changes, rent controls and measures to combat the effects of gentrification.

“Today”, the report argues, “it tends to provide provision only for the poorest and most vulnerable. More is urgently needed in this respect given the rise in rough sleeping in many of Scotland’s urban centres, the Scottish Government should look at broadening and deepening its social housing strategy for wider sections of society.

“The idea that social housing is only for the poor creates an unnecessary stigma around for those living in the sector and drives an unhealthy obsession with home ownership (which has not always existed). A rent system which tied quality to cost and cost to affordability could be applied to a more diverse social housing sector in the future as well, creating a universal social housing service once again.”

“We again repeat our call for an immediate rent cap in both the public and private sector.” Living Rent activist Craig Paterson

The report was welcomed by the Scottish tenants union and campaign group Living Rent. Living Rent activist Craig Paterson said: “Now is not the time to muse over these findings and let them be forgotten, rather it should be a siren call to immediate action.

“We again repeat our call for an immediate rent cap in both the public and private sector, in order to bring a halt to the spiralling cost of living and to help alleviate the continued degradation of people’s mental health from shoddy housing conditions.”

Both the report and Common Weal’s Housekeeping Scotland Convention aim to take advantage of the recent prominence of housing on the political agenda, which has increased since the Grenfell Tower tragedy and which Common Weal’s Ben Wray said had “woke the political class out of their sleepy complacency” on the crises surrounding the issue.

The Scottish Labour leadership campaign of MSP Richard Leonard has committed to “tough rent controls” via a ‘Mary Barbour Law’, named after the campaigner who played a key role in the 1915 Glasgow rent strikes, and pledged that, if elected, all housing in Scotland will meet the Scottish Housing Quality Standards. At the UK Labour Party conference in September, Jeremy Corbyn also proposed rent controls as part of his new programme on housing.

Earlier that month, Glasgow City Council voted to commission a report on the possible implementation of rent controls throughout the city, while a measure of rent control was featured in the Scottish Government’s 2015 programme for government, through the inclusion of a Private Tenancies Bill which aimed to “provide more predictable rents and protection for tenants against excessive rent increases, including the ability to introduce rent controls for rent pressure areas”. The bill was later put into effect by Edinburgh City Council, making it the first local authority in Scotland to do so.

Since then, the Scottish Government has continued to place emphasis on addressing the housing crisis, with 68,000 affordable homes delivered since the SNP’s election in 2007, along with the reintroduction of council housing, the end of the Thatcherite right-to-buy policy and a commitment to delivering 50,000 affordable homes by 2021, including 35,000 social homes.

Following the release of this year’s programme for government, the Scottish Federation of Housing Associations called on the Scottish Government to “commit to housing investment beyond the lifetime of the current parliament as this will allow for long-term planning”.

Adding further to the debate over housing, Scottish Conservative leader Ruth Davidson advocated the building of 25,000 new homes a year, with a view to creating “a series of new generation new towns.” However, her intervention drew widespread criticism of the Tory record on housing.

The Housekeeping Scotland Convention will take place in Glasgow on Saturday 7 October, ahead of the beginning of the SNP October conference on Sunday. Events will include examinations of municipal homes, land and tax reform, housing justice for Scotland’s black and minority ethnic community, homelessness and environmentally friendly homes, and will feature speakers such as political economist Professor Richard Murphy, Scottish Greens MSP Andy Wightman and Common Weal director Robin McAlpine.