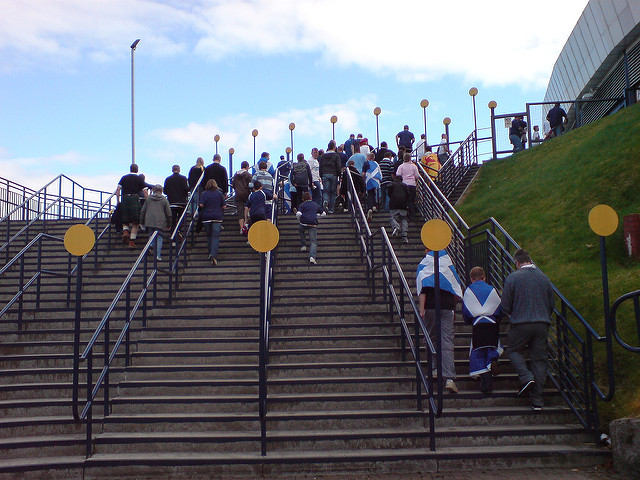 Further controversy surrounds tonight’s match, at which the SFA has banned all flags but those of Scotland and Israel

PALESTINIAN SOLIDARITY ACTIVISTS from across Scotland have renewed their call for a sports boycott of Israel, as protests are planned for the Nations League game between Scotland and Israel tonight [20 November].

In the wake of recent hostilities in Gaza and the internationally condemned killing of Palestinian demonstrators participating the ‘Great March of Return’ border protests, various Palestinian solidarity organisations will gather outside of Hampden Park this evening, voicing their objection to the Scottish Football Association’s accommodation of the Israeli team.

Framing their demands as part of the Boycott, Divestment and Sanctions (BDS) movement, which has achieved mounting success in agitating for the non-violent international isolation of Israel, organisers of the ‘Don’t Play Ball With Israeli Apartheid’ protest have argued that Israel’s participation contravenes UEFA’s commitment to anti-racism, and have highlighted the Israeli Football Association’s role in supporting illegal Israeli settlements through the six teams that represent them.

The upcoming match was already the subject of controversy, following the revelation by Scottish press that the SFA has prohibited fans attending the game from displaying any flags or banners but those of Scotland or Israel – meaning, crucially, no Palestinian flags.

In an announcement made on social media which drew heavy condemnation from some fans, the SFA stated: “Flags: Fans wishing to bring flags to the match should note that only flags of the two competing nations will be permitted into the stadium.”

Speaking to CommonSpace today ahead of the protest, Mick Napier of the Scottish Palestine Solidarity campaign said: “Sports boycott was important in pressurising the South African apartheid regime into a negotiated exit from that pariah regime.  The international BDS movement aims to repeat that success.

“The Israeli Football Association includes six teams from illegal settlements which the UK Government, not to mention Amnesty International and the UN, consider to be war crimes.

“The call from Palestine, under a hail of Israeli bullets, is for FIFA to suspend the IFA until it removes these settlement clubs from its membership.

“Israeli snipers since March 30th have killed over 200 unarmed Palestinian demonstrators but have also deliberately maimed 20,000 with live fire, many of them youngsters aspiring to play football.”

Referring to the SFA’s apparent flag ban, Napier continued: “The pro-Israel crowd objected to Glasgow City Council flying a Palestinian flag for 24 hours during a particularly brutal massacre of Palestinians. Internationally, the Palestinian flag has become a symbol of a desire for freedom against a racist state. Banning this flag while allowing the symbol of a state that stands accused of war crimes and crimes against humanity is not being neutral but is aligning with British arms companies which supply that state to carry out its monstrous crimes.

Napier further noted that a petition calling of the SFA to support the Palestinian demand to exclude teams from illegal Israeli settlements, set up before Scotland’s last match with Israel on 11 October, has now garnered over 6,000 signatures.

This follows the recent withdrawal of Argentina from a game with Israel, and as well the withdrawal by Adidas of its sponsorship of the IFA, in response to a call from over 130 Palestinian football clubs.

Napier confirmed to CommonSpace that a letter sent by the Scottish Palestine Solidarity Campaign on 1 August has not yet received a response.

Also participating in the Hampden protest will be Scottish Jews Against Zionism, whose member Sarah Glynn told CommonSpace: “It’s really concerned with anything that allows Israel to be presented as a normal nation one can play sport with. This isn’t about football – it’s even more important than that. We’ve got to send a message that we can’t support a state that is persecuting other people.

Regarding the SFA’s flag-ban, Glynn said: “I hope this will be broken. It sends such a wrong message.

READ MORE: Analysis: Gerard Butler can support charities on the frontline in Gaza or the Israeli Defence Force, but not both

“We know that image is very important to Israel – portraying themselves as a normal democratic nation – and the Scottish Football Association is basically giving them a platform to do this. And we know that many people in Scotland do not want this to happen.”

Glynn argued that support for BDS is “absolutely” growing in Scotland: “And that’s why Israel is so worried. They’re not winning the argument, so they’re trying to outlaw the argument by portraying it as anti-Semitic.”

Tonight’s game is only the latest sports-related controversy to confront Israel. In October, it was reported that Israel’s public broadcasting company Kan could lose its rights to broadcast preliminary World Cup and European Championship matches, due to its refusal to exclude illegal settlement teams from its programming schedule. UEFA have also banned the broadcaster from airing its games to illegal settlements.

In a 2017 report, Human Rights Watch wrote: “As well as being unlawful under international humanitarian law, Israeli settlements in the West Bank contribute to serious human rights abuses.

“The settlement clubs play their home games on land unlawfully seized from Palestinians, and West Bank Palestinians are not allowed to enter the settlements to play, coach of even watch the matches.”