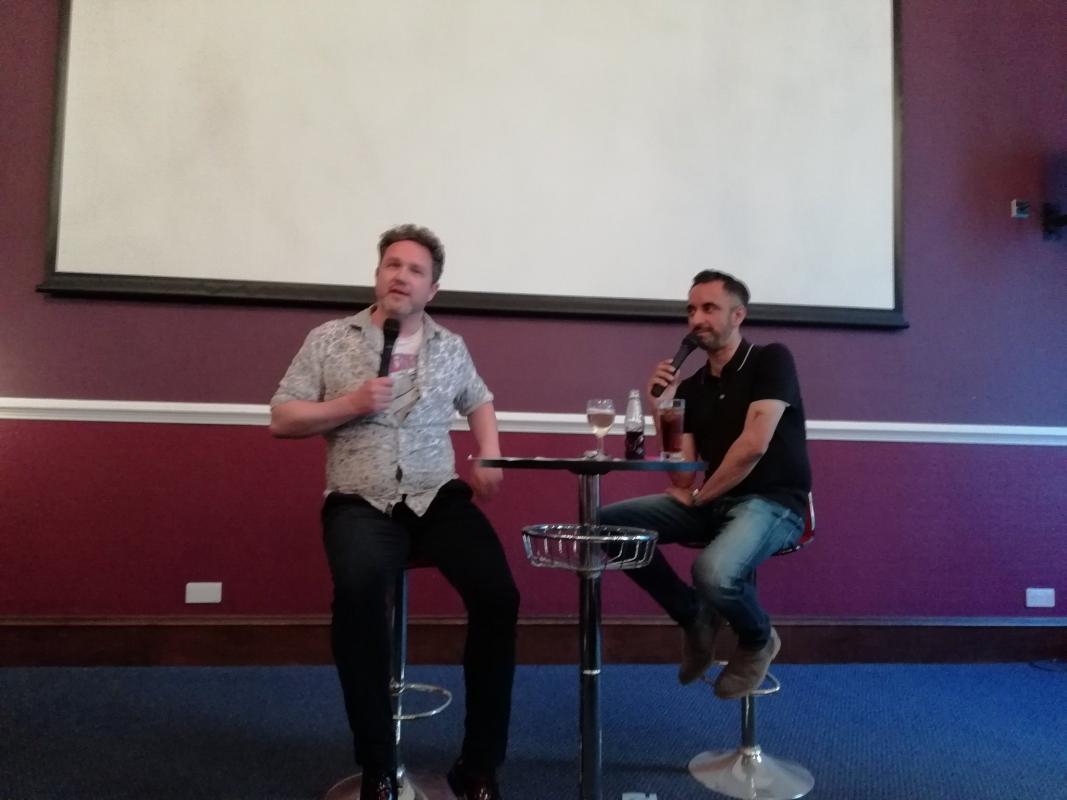 AAMER ANWAR, one of Scotland’s most prominent civil rights advocates and the top lawyer currently representing embattled former Catalan minister Clara Ponsati against attempted Spanish extradition, has explained his support for independence as an emancipatory means of fighting for “freedom and justice.”

Speaking in conversation with the Scottish novelist and playwright Alan Bissett, a fellow veteran of the 2014 referendum campaign, at an Aberdeen event on Thursday [7 June] ahead of the SNP’s spring conference, Anwar reflected on the sensation of potential the original vote inspired: “In my lifetime, I have never known a position where you can put an X in a box, and change the destiny not just of your children, but of your children’s children.

Anwar remembered: “I remember at a demonstration in Edinburgh of about 20,000 people – I remember saying that I had a wishlist. I didn’t expect a socialist utopia, but I thought it was a start of something different. For me it wasn’t about whether we were £5 better off, £1000 better off, £500 worse off – that didn’t matter to me.  What mattered was: could we create a different kind of society where people mattered?

“Could we get rid of nuclear weapons? If we could, then Yes, even if that was the only thing we achieved. Could we tear down the walls of Dungavel Immigration Removal Centre? If we could, it was worth it. Could it be the case that we could preserve the National Health Service without worrying about the fact that the Tories would keep coming back and trying to bring in private initiative? If that was the case, then fine. Could we preserve the right to free education to free education in universities?

“The list went on and on and on. And of that checklist, if even one of those was achievable, then it [independence] was worthwhile.

At a time when the Yes movement has seen sometimes fierce debate over how much distinct political goals should determine its approach to achieving independence, Anwar argued that it was precisely because an independent Scotland could advance such goals that made it so attractive.

“Freedom and justice have never been handed to us on a plate. We have always had to fight.” Clara Ponsati lawyer Aamer Anwar

Anwar continued: “The idea of being in control of your own destiny was overwhelming, and I found that’s why many people in the independence movement felt it was worth it. It’s not down to the wonks – with no disrespect to the economists – but from the many people I’ve talked to, what they wanted to do was have the opportunity to be in control of their own future.

“We didn’t want to be part of illegal foreign wars. We did not want to masquerade on the world stage, supporting human rights while we wined and dined dictators, sold them weapons, and watched them murder innocent people – as we see, whether in Palestine or other areas.”

Anwar explained that was he brought up by a Conservative-supporting bus driver, but whose ideas about politics were reformed at Glasgow University, where he “very briefly” joined Labour, before becoming an activist in the Socialist Workers Party.

“People still ask me why I want independence, and I say I want a country that is based on human rights, based on justice. And yes, there is racism, but that we will fight to cleanse the racism and the sectarianism. I’m not naïve enough to think we’re all Jock Tamson’s bairns, but at least people shout it from the rooftops. At least we do live in Scotland, where we do not play the race card so regularly played by Westminster.”

In explaining his own political radicalisation, Anwar recounted his formative experience with police brutality at the age of 21 in the early 1990s; while posting flyers in protest against the then-Secretary of State for Scotland Michael Forsyth, he was pursued by several police officers, who eventually pushed him into the concrete pavement, smashing his teeth and forcing him into unconsciousness. When he came round, he was told by one of the officers: “This is what happens to black boys with big mouths,” before again being assaulted, as the policeman kicked him in the stomach.

Anwar said that two lessons were learned: the police learned that “this black boy’s big mouth is going to get bigger as the years go by.” Meanwhile, Anwar learned: “Freedom and justice have never been handed to us on a plate. We have always had to fight. And that applies very much to the present position we find ourselves in. Just because politicians in Westminster have said, ‘that’s it, you’ve had your vote, that was a once-in-a-lifetime opportunity,’ doesn’t mean we have to accept it.”

Anwar said he particularly resented portrayals of the independence movement as “flag-waving nationalists, racists and sectarians. The perfect demonstration of the opposite being the case, Anwar argued, is the solidarity offered to Catalonia – solidarity which was notably absent in unionist circles.

He described it as a “disgrace” that when an SNP motion was passed in Glasgow City Chambers in support of Catalonia, Labour abstained: “Frank McAveety, who was leader of Glasgow City Council, stood up and argued against support for Catalonia, on the basis that they were breaking the law. So did Martin Luther King. So did Rosa Parks. So did Nelson Mandela – proudly and rightly, Glasgow City Council flew an ANC flag from the same flagpole they will occasionally fly a Palestinian flag.”

Anwar expressed his deep disdain of Labour’s position – or lack thereof – on the troubles of Catalonia. “I think it’s a rotten mistake for the likes of Jeremy Corbyn. I’m disgusted that a Labour party of Richard Leonard and others – who privately express sympathy for the likes of Clara Ponsati  – but fail to actually speak up properly for her.”

In considering the task ahead for the independence movement, as speculation about the possibility of a second referendum continues to grow, Anwar emphasised that the chance may not come again: “We cannot afford to fail this time. We can stumble, we can falter, but we know the mistakes we made the last time. I don’t think we can just afford to talk to the converted.”

Alan Bissett’s observations reflected Anwar’s, noting that many of Scotland’s minorities were faced with a “different struggle”, and it was important for them to the wider independence movement to let them know that their concerns are important and are “factored in.”

The Left can build their own case and take it to the people and say: ‘We don’t agree with that’. That’s a strength.” Scottish writer Alan Bissett

The concerns of minorities within Scotland, such as migrants, were further articulated by a contribution from Gregg Brain, whose Australian family moved to Scotland in 2011 on his wife Katheryn’s student visa, and where threatened with deportation after their post-study visa was withdrawn by the Home Office. In 2016, it was confirmed they would be allowed to remain in the UK, but the family faced fresh difficulties last year when the Home Office demand £7,000 in visa fees.

Bissett said: “Now, I’m much more on board with the Common Weal analysis – an independent currency, a central currency – but I’m already on board with this. The SNP are facing towards the people who aren’t yet on board. The Left can build their own case and take it to the people and say: ‘We don’t agree with that’. That’s a strength – remember, Labour and the Tories were campaigning for two different Unions. That didn’t interrupt their message.”