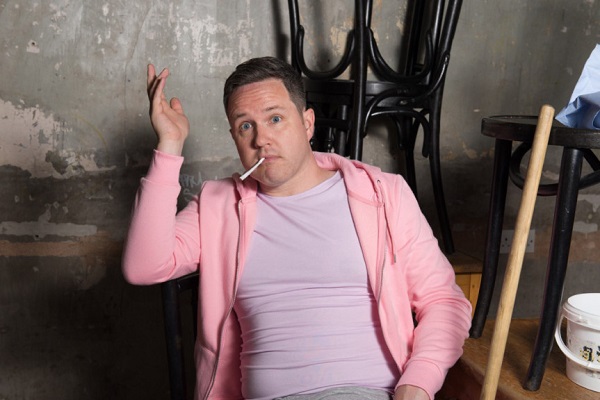 ALAN BISSETT returns with his feisty, loud-mouthed Moira Bell, “the hardest woman in Falkirk” for a second round of sassy monologues.

The Moira Monologues premiered in 2009 and, looking to update the popular character, Bissett has written six new scenes for the cleaner and single-mother tackling (among other things) sexual escapades, neighbourhood gossip and Scottish independence, all told by Moira to her (off-stage) best pal Babs.

Bissett’s hard Falkirk dialect and audacious mannerisms (aided by director Sacha Kyle) make it very easy to quickly see the world through Moira’s eyes. Holding his hand as if constantly smoking a fag and looking at the audience with a wide eyed glare, Bissett’s performance in convincing and natural as a gossipy, argumentative working-class woman.

There are updates to the first show which will please fans of the original Moira Monologues – she’s a gran now, however Bissett’s text offers enough comedy to entertain those who missed the sold-out original play.

The character, based on a combination of the women in Bissett’s family, is at once hilarious and terrifying. She fights with her neighbours who have unnecessarily loud sex next door, takes drugs with her estranged little sister and dishes the dirt on the realities of cleaning the houses of posh folk.

Moira is unapologetic and has no time for the false or the pretentious. In one scene, she joins a yoga class believing the instructor’s name to be ‘Namaste’.

Her no nonsense approach to life makes the scene all the funnier as she cares little for the fads of new fitness trends: “Who are all these people eating avocados?”

The character, based on a combination of the women in Bissett’s family, is at once hilarious and terrifying.

Moira is a breath of fresh air at the Edinburgh Fringe. Her popularity is, in part, due to the lack of comparable working-class female characters on offer.

I doubt this will be last we hear from Moira Bell.