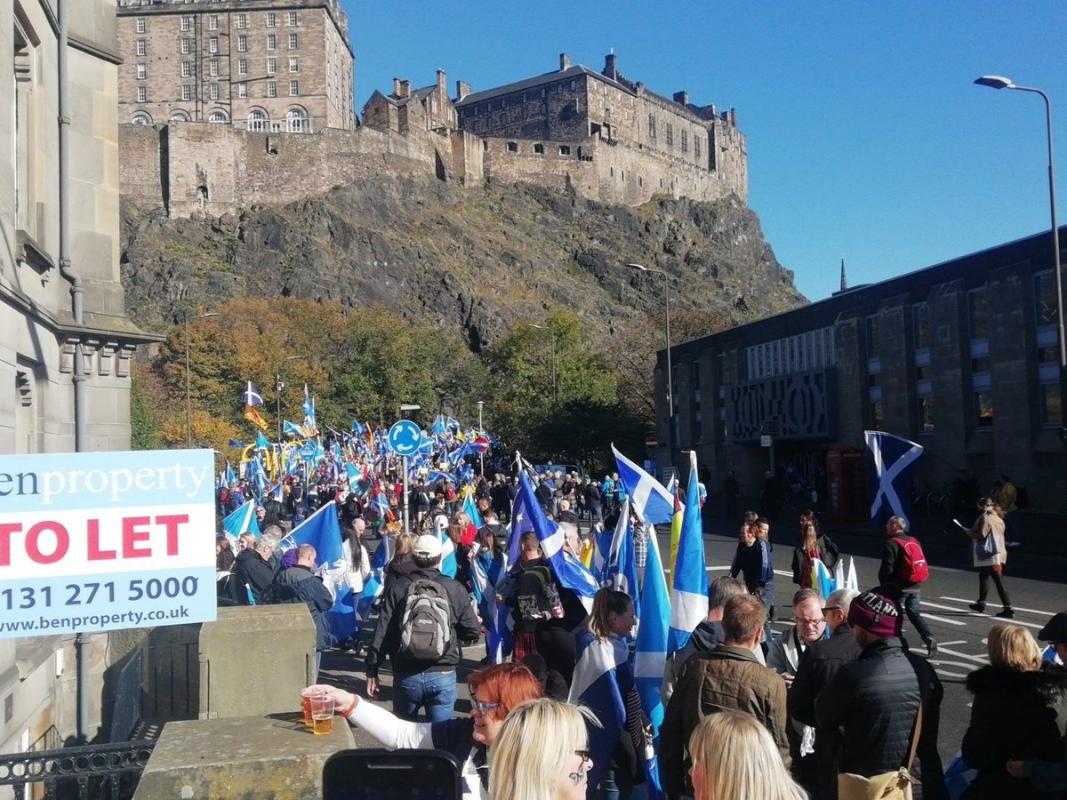 Alan Petrie from the Aberdeen Independence Movement and Siobhan Tolland from the Dundee & Angus independence group write a joint article about why a totally different movement for independence is needed now than in 2014 – one that is about building a new country, not protest

REMEMBER 2014? Cameron was the worst we’d had. Nobody had even heard of Brexit. Boris Johnston as a potential PM would have made our ribs break with laughter. Donald Trump as president was nothing more than a strange Simpson’s episode. And an imagined future of possible food shortages and stockpiling medications would have been dismissed as paranoid scare mongering by even the most dystopian amongst us. 2014 really was a political lifetime away.

These seismic changes raise interesting questions for our independence movement. In 2014, we were an amazing movement. We captured the imagination and hope of nearly half of the population. We managed to convince them that a leap of faith into a new society really was the best option for us. For all the critiques the YES movement has had, it was a hugely successful political awakening for Scotland. And its role in Scottish history will be seminal.

But we lost. And whilst we both love to wax lyrical about historical events generally, we recognise that history should never really be repeated. The 2014 referendum campaign is history and attempts to re-enact that through the current independence movement could be politically disastrous for us.

The Business for Scotland Ambassador Training model of understanding character types can actually help us appreciate why this could be. There are three character types; the strict parent, the loving parent and the child. The strict parent requires rules and order and structure, the loving parent works from love and compassion. The child works from a self-centred process of how do things affect me.

The last referendum could be seen to attract the loving parent and, to a lesser extent, the child. The strict parent type was less convinced in part, because they opted for the order and structure the Union offered. However, political events mean that this is no longer the case. The Union’s descent into chaos breaks its 2014 offer of stability. But Scotland now offers that stability, and as a result, we can now convince those who did not see the merits of independence last time round. The movement can now build on the basis of taking everyone with us.

But more than this: unlike the last referendum, we are no longer just about imagining an alternative independent future. We are about how we actually build that new independent country. And in terms of how the movement functions that changes everything. Because in order to be fit and ready for this role, we need to be so much more than we were the last time round.

And that means in part, we need to move away from our politics of protest. This is not an easy thing to do. Our biggest political struggles in history were protesting against a huge injustice – usually at the hands of Westminster. Protest is often what defines our history and politics. That power served us well in 2014 because it allowed us to articulate our frustrations and discontent about the Union. And it was from that resistance, that we developed a space to articulate a positive political alternative.

We need to evolve from being just a movement of protest, however. Because resistance against something inevitably sustains the status quo. We need that structure in order to fight against it. Resistance for something, however, is different, because it genuinely builds something new. Resistance for needs to break the status quo to build something new. And that is what our movement now has to do. We are leaving the UK behind and transforming into a nation in waiting. And we need to evolve and mature so we can do that successfully.

We are not a country that might have a referendum in the next few years. We are in transition to being an independent nation: a nation in waiting if you will. But the timescale and the nature of that transition very much depends on us. We can choose to embroil ourselves in political battle against those we don’t agree with or we can send an open invite for all to help us develop the Scotland we all want to be.

We clung to the Yes camp immediately after the referendum because it provided us with a much needed comfort. Identifying with the 45 slogan, for instance, gave us solidarity and solace in our defeat. But we would argue that these allegiances have now become counter-productive. Because when we solidify as a group of resistance we build barriers that separate us from those who were not convinced of independence. Our very definition of people through the prism of YES or No entrenches this separation, and actually defines our journey in oppositional terms. There is no such thing as a yes and no voter: only people who are yet to be convinced.

And that has massive implications for how we act as a movement. Our entrenchment has depersonalised those that were not and are not part of our group. Many of us have confused the power of the state structures with individuals who for whatever reason, is not convinced by the merits of independence. We only have to look on social media to see language like ‘yoon’, ‘Unionist (insert swear word)’ or ‘traitors’ even. The Tory Scum banner exemplified this vein. This is the language of tribalism, reflecting an out of control football match rather than a positive modern political nation that we need to become.

And so it really is simple. A line needs to be drawn under 2014 because we are not the movement or the nation we were in 2014. We are an innovative and hugely influential social democratic movement.  More-so, our country is not in crisis as our neighbours are, and we are fast becoming an imaginative and innovative nation. We are a country in transition to independence.

We no longer have to be the underdog, then, and we don’t need a politics of grievance. Our movement has to be less about protest and more about how we move into being an independent country. And with that, we must develop a positive, constructive and grown-up national psyche that recognises our new strengths. Our movement was in its infancy in 2014. What we need now is to evolve into a confident and mature political force which, with the chaos and collapse of Westminster, will become unstoppable. 2014 is over. It’s time for a new campaign.