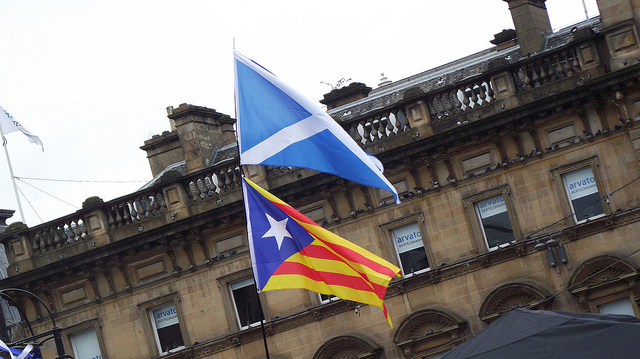 WAS the Catalan vote for independence illegal? Yes. It’s that simple. The 1978 Spanish Constitution, agreed across the country in the years following General Francisco Franco’s death in 1975, makes two explicit provisions regarding Spain’s unity.

The first is that “the constitution is based on the indissoluble unity of the Spanish nation”. Secondly, “political decisions of special importance may be submitted to all citizens in a consultative referendum” but the “referendum shall be called by the king on the president of the government’s proposal after previous authorisation by the congress”.

The moral argument in favour of the Catalans, however, is as equally unequivocal. The parliament of Catalonia unilaterally declared independence from Spain on 27 October 2017 with a vote of 70 to 10.

Madrid’s prosecution of ministers has escalated a zero-sum game of politics into a repression of democracy. And repression it is.

Catalans, through their elected representatives, invoked the cardinal right to “self-determination of peoples” as stipulated in the Charter of the United Nations. This was preceded by an ‘illegal’ referendum’ on 1 October in which 92 per cent of citizens (of a 43 per cent turnout) voted to secede from Spain.

Following the independence declaration, the fledgling Catalan republic was stripped of its statehood and placed under direct control of the Madrid government according to Article 155 of the constitution.

Spanish Prime Minister Mariano Rajoy sacked the entire Catalan government, including President Carles Puigdemont. The ousted president fled to Belgium and eight of his ministers have already been jailed while they are investigated on charges of alleged rebellion and sedition.

Madrid’s prosecution of ministers has escalated a zero-sum game of politics into a repression of democracy. And repression it is. The word has gone out of fashion in Western Europe because it’s so often deployed hyperbolically. But what else can one call the jailing of democratically elected leaders acting on a democratic mandate?

Under Spanish law, only the central government has exclusive competencies to hold referenda. Madrid rejected the vote as Spain’s constitutional court had previously ruled it illegal because it violated the Spanish constitution.

READ MORE: What Scotland can learn from the referendum from below in Catalonia

Many commentators, therefore, make a lazy comparison between Scotland and Catalonia; usually with the intent of satisfying their own political point. But this is limited. In both Britain and Spain, the central government has to grant the legal right to hold a referendum. For Spain this is outlined in the constitution, and used for significant issues like political reform after Franco, to approve a new constitution and Spain’s entry into Nato, but never for a countrywide debate on secession.

In the UK, powers were temporarily transferred with the consent of Westminster to Holyrood for the Scottish independence referendum (constitutional issues are reserved to the state under the Scotland Act 1998). The Scottish Parliament, even under an SNP administration for 10 years, has flirted with, but never attempted to launch an unconstitutional referendum.

But context is king, and this is where comparisons end. The call for Catalonian independence is inherently different due to the forcible removal of its political and cultural autonomy throughout its history. To many Catalans, the pull of their unique culture, identity and language has not only been fuelled by the Spanish Government’s legal intransigence, but by the parallels of recent events to Franco dismantling their right to autonomy decades previously.

Whereas the UK has been a unitary state since 1707, for much of the 18th and 19th centuries Scotland enjoyed extremely decentralised control over its law, education and health, and again after 1999.

The call for Catalonian independence is inherently different due to the forcible removal of its political and cultural autonomy throughout its history.

The modern battling of morality and legal responsibility is rooted more in a debate about the past than the promise of the future. Prime Minister Rajoy must uphold a constitution produced at a time when ethnic nationalism so often emerges from the passing of an autocratic ruler like Franco.

That Spain staved off such an eventuality, barring an attempted coup in 1982,  is a testament to the time the constitution bought, but that time has run out.

The 1932 Statue of Autonomy was the bedrock of enshrining Catalonia’s special status with protections for language and identity, but it was washed away by Franco. Catalonia’s status was never fully restored under the 1978 constitution. More autonomy was granted in matters of education and culture, but less so regarding the systems of justice and public order.

Throughout the 1980s and 1990s, Catalonia continually developed an increasingly unique sense of self-coupled by a rise in its international identity and its systems of governance.

Self-government has been the awkward halfway house to independence for decades. To compound the simplicity, many Catalans never felt quite a part of the Spanish club. For many Spaniards, there is already a real antipathy towards Catalonia as the odd uncle who they never really knew and who reluctantly showed up for Christmas get togethers.

“If you want to go, then go, but you won’t get a penny,” is the standing feeling (ignoring, like any grandstanding in a divorce, the complicated calculation of entitlements after centuries of integration).

So consider the facts as they are: an illegal referendum conducted by legally elected representatives who have declared independence on the basis of that referendum. Attitudes are fierce, and a line has been crossed which is now impossible to backtrack from, save for a second referendum.

The mistake of Rajoy and president-in-exile Puigdemont was to misjudge when the other man would fold in such a high stakes poker game. Both men must have known this would happen, or both were criminally ignorant as to the other man’s determination.

Both are guilty of failing to observe the will of people across Spain by refusing to adapt to the circumstances and produce a deal palatable to either side.

Attitudes are fierce, and a line has been crossed which is now impossible to backtrack from, save for a second referendum.

Fighting to end Apartheid wasn’t legal. Indian protests against the British Empire weren’t permitted. The American and French revolutions weren’t constitutional. For that matter, slavery was perfectly legal until 1875 in the United States. Change does not always come from operating within a constitutional framework.

Intransigence and stubbornness is the real enemy here for both parties. Intractability, either by cracking down on civilians or by declaring unilateral independence, has solved nothing. A real referendum must be had, that respects all Spaniards.

It’s perhaps worth remembering what the contentious, boorish and occasionally correct Alex Salmond said in 2014: “Nobody has lost their life arguing for or against Scottish independence … nobody has had so much as a nosebleed. That’s not unique, but it’s a very, very precious thing.”

That ideal should be the spirit of the Spanish constitution, and to the spirit in which all sides proceed in the months ahead to produce an outcome that protects democratic values.