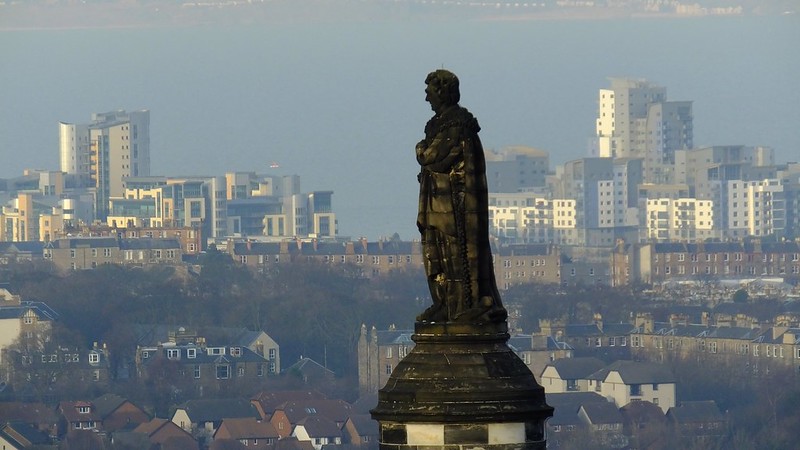 As a new installation reflecting on Scotland’s history with the slave trade exhibits in Edinburgh, Alastair Stewart argues that the country lives with a “collective amnesia” about uncomfortable aspects of its past

KAYUS BANKOLE’S ‘Sugar for Your Tea’ installation at Edinburgh City Chambers is apt, given its proximity to statutes of David Hume and Adam Smith. The Young Fathers singer uses video and projections to explore the Scottish merchants and businessmen who – many familiar from streets and statues across the country – made their fortunes on the back of the slave trade.

Hume once wrote: “I am apt to suspect the negroes to be naturally inferior to the whites.” Smith tried to confront slavery by arguing it economically inefficient. He observed that people have a fundamental desire to dominate and the slave trade provides it.

For all his purported egalitarianism, Robert Burns once accepted a position as a book-keeper on a Jamaican slave plantation. Despite later writing about ‘the unfeeling selfishness of the oppressor’ and producing the distinctly abolitionist poem ‘The Slave’s Lament’, he still despicably mused on what his life as “a poor Negro-driver” might have been like.

Sir Walter Scott propelled the uncritical romanticism of Scottish history with ‘The Tales of a Grandfather’. That soft-touch argument for Scottish moral and philosophical exceptionalism has beleaguered the country since and made a mockery of Burns’ claim “that Man to Man, the world o’er, Shall brothers be for a’ that.”

We live with collective amnesia about our history. In 1790, the total worth of exports and imports between the West Indies and Scotland was at least £50 million (by today’s value). By 1796, Scots owned nearly 30 per cent of the plantations in Jamaica and 32 per cent of the slaves by 1817. Some Scots notoriously liked to dress their slaves in tartan.

For decades, Scotland benefited from slave labour in British colonies, particularly from cotton, sugar and tobacco plantations. 70 to 80 slaves lived in Scotland at any given time. Leith and Glasgow were springboards for Scots to make fortunes as traders and merchants, and there is little doubt profits from slavery sparked the industrial revolution across the country.

The owning of personal slaves was banned in 1778 when the Court of Session ruled in favour of former slave Joseph Knight. The slave trade in Britain’s colonies became illegal in 1807 and unlawful for British ships to carry slaves, while their sale was banned in Scotland. However, the total abolition of slavery did not come until 1833 (five years after Scott’s saccharine history). Former slave-owners were even repaid for their loss of ‘property’.

William Wilberforce may be the most remembered leader of the abolitionists, but thousands of Scots campaigned hard for slavery’s end. In 1792 a third of abolition petitions came from Scotland. U.S abolitionist Frederick Douglass undertook a speaking tour of Scotland and visited Edinburgh in 1846.

The British Empire always had a disproportionate representation of Scots at every level of its administration. Jeremy Paxman writes that “one-third of colonial governors between 1850 and 1939 are said to have been Scots.”

Edinburgh is surrounded by its imperial past, including the statue of Henry Dundas in St. Andrew Square. If not for Lord Melville’s “skilful obstructions,” writes the historian Hugh Thomas, “the slave trade would have been abolished in 1796, if not 1792.”

While some look today at the US and feel alarm at Confederate monuments being torn down, there is a balancing act between justice, memory, and preserving historical truth. There’s quite rightly a statue of Abraham Lincoln in the Old Calton Burial Ground dedicated to the Scots who went to fight in the American Civil War.

Of course, it is possible to be ashamed and proud of your past without condemning or excusing all of it – it’s not a binary, zero-sum choice. Scots must be more critical, and Mr Bankole commended for his dedication to truth.

Kayus Bankole’s ‘Sugar for Your Tea’ will be shown at the Edinburgh City Chambers until Burns Night (25 January).

Alastair Stewart is a freelance writer and public affairs consultant. He regularly writes about politics and history with a particular interest in nationalism, and the life of Sir Winston Churchill. Read more from Alastair at www.agjstewart.com and follow him on Twitter @agjstewart