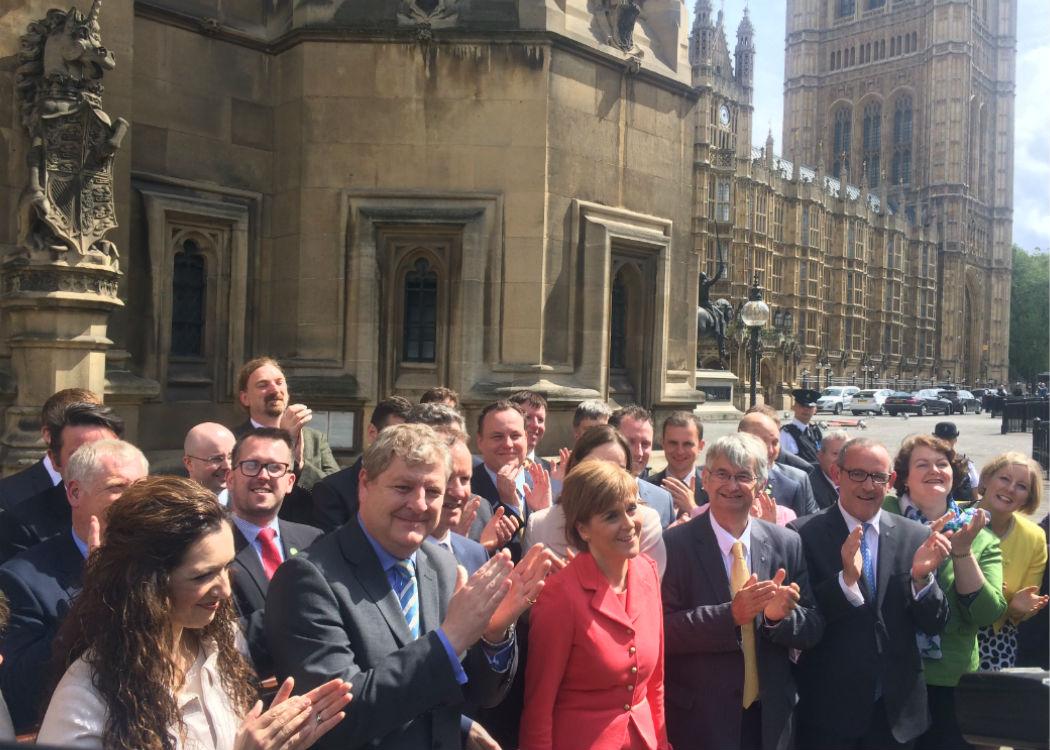 NICOLA STURGEON arrived back in London today alongside a hefty group of 56 SNP MPs, among them someone all too accustomed to these parts, Alex Salmond.

Speaking outside Westminster, Scotland’s First Minister and her predecessor insisted that the SNP team will be the effective opposition to the Conservative majority government and that it cannot be “business as usual” following last Thursday’s election result.

“The Scottish lion has roared and will be roaring in the chamber of the House of Commons,” beamed Salmond, saying that the vote for the SNP “has electrified politics and is the most interesting thing that has happened in this election.”

Asked how the SNP will deal with the new Conservative government, Salmond said:
“We’ll try for a constructive relationship. But everything about their track record tells you that it’s difficult to maintain a constructive relationship for long because they’re a party which delights in making the poorest and most vulnerable in society pay for their own economic mistakes.”

“If the Tories are intent on taking 8 billion out of the welfare budget, oppressing the poor, the vulnerable and people with disabilities, then the SNP will oppose it,” he added.

Meanwhile, Sturgeon said she plans to tell Prime Minister David Cameron that it is not “business as usual” when she meets him in the near future.

“Whatever David Cameron might think, he has to recognise how Scotland voted,” said the SNP leader. “We are absolutely here to stand up for Scotland. But we can also be a progressive voice for other parts of the UK. I’ve spent a lot of this week in London and a lot of people here are looking for the SNP to be a voice for them against the Tories and we are determined to try to do that.

“Scotland voted for change last Thursday and David Cameron cannot ignore that and behave like it is business as usual. The message that the Scottish people sent has to be listened to and heeded and that’s what I’ll tell him when we meet in the not too distant future.”

The SNP won over half of the popular vote in Scotland, and the extent of that victory has led to talk of devolution beyond the the Smith proposals being offered, in order to abate moves towards another independence referendum.

Salmond said that he expected the ‘Vow’ made before last September’s independence referendum to be redeemed in full.

“The DNA of the SNP is for an independent Scotland but in the meantime we want to make as much progress as we can,” he said. “In particular we want to see the promises made delivered. It’s entirely reasonable with the extraordinary mandate that we’ve received that these commitments are redeemed in full.”

And if they’re not?

“I expect there would be political consequences. We’ve got a bigger sway here than we’ve ever had previously,” Salmond answered.