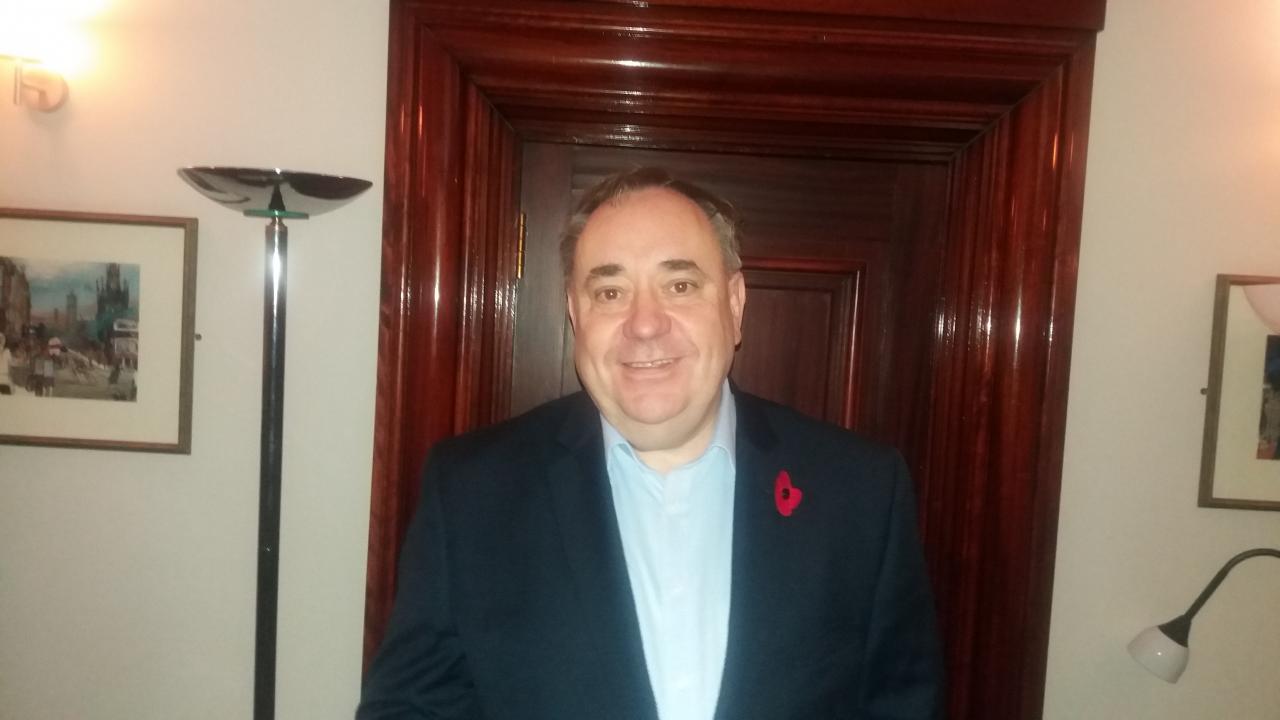 FORMER FIRST MINISTER ALEX SALMOND believes the UK Government has remained silent on the situation in Catalonia out of fear of reprisals by the Spanish Government in Brexit negotiations.

Speaking to CommonSpace ahead of his speech at the SIC conference in Edinburgh on Saturday, Salmond said: “The Spanish state, because it is a loyal European state, can count on at least silence from many European institutions. The UK as a state couldn’t count on that at the present moment, because it has no influence left in Europe.

“The primary reason why Boris Johnson or Theresa May hasn’t said anything critical of the Spanish Government and their range of appalling behaviours, is they’re frightened of the Spanish reaction in the Brexit talks.” Alex Salmond

“Indeed, I’d go further – I’d say the primary reason why Boris Johnson or Theresa May hasn’t said anything critical of the Spanish Government and their range of appalling behaviours, is they’re frightened of the Spanish reaction in the Brexit talks. It demonstrates the weakness of the British body politic.”

Elaborating on the current condition of politics in the UK, Salmond said: “The British political scene is in a state of disintegration and disorientation. Some of that is due to a range of things which have been implicit in the system for a long time.

“Some of it is due to the disorientation of Brexit. The fixed points on the compass by which Britain has operated for the last half century have now dissolved, and that has knock-on consequences.

“The fixed points on the compass by which Britain has operated for the last half century have now dissolved.” Alex Salmond

“All of which is grist to the mill, I would have thought, for the independence movement in Scotland. The British state, as an apparatus, has never been weaker.”

The subject of Catalonia dominated much of the latest SIC Conference. Many unionist commentators have argued that the Catalan crisis poses problems for independence supporters in Scotland, dividing the movement between the passionate solidarity of the grassroots and the comparatively restrained position of the Scottish Government. Asked if he credits this view, Salmond responded: “No. Scotland isn’t Catalonia and Catalonia isn’t Scotland.”

Regarding some of the arguments that have been made in the press regarding the situation in Catalonia, Salmond commented half-jokingly: “There’s the wider unionist media, and then there’s Brian Wilson. Even in the wider unionist media, most people have stopped short of the Scotsman columnist’s view that the Catalan people are tyrannically imposing their will on the rest of Spain.”

“At various times in my career, people in Catalonia, including Puigdemont, have come to see me to ask my advice.” Alex Salmond

Asked what attitude he feels the Scottish independence movement should take to Catalonia, Salmond responded: “Obviously, at various times in my career, people in Catalonia, including [Carles] Puigdemont, have come to see me to ask my advice, and that’s fine.

“But what we should be saying about Catalonia is be quite clear: we should be saying there are standards of civil behaviour, of liberal democracy, of not beating people over the head, of not jailing your opponents, which other countries in Europe should insist upon, and not be mealy-mouthed about it.

“What we shouldn’t be doing is telling people in Catalonia what to do or how to vote.”

When asked by what means Scottish independence supporters should judge the relevancy of another self-determination movement to their own cause, Salmond said: “The first means is to start by realising that two countries are never identical – just as Catalonia isn’t Scotland, neither is Ireland. Historical circumstances are different.

“There are standards of civil behaviour, of liberal democracy, of not beating people over the head, of not jailing your opponents, which other countries in Europe should insist upon.” Alex Salmond

“But there are universal standards of behaviour which should be accepted, including the right of self-determination and the right for people to vote peacefully. And that’s what you should articulate in terms of your attitude to other independence movements or indeed, to foreign policy by and large.

“You look for civilised norms of behaviour and try and articulate that, as opposed to telling people how to vote, which I’ve tried to avoid.”

“In other words, if you take the European question, it’s up for everybody to agree on, but I think in the current circumstances, a position pro-EFTA would be the right position for Scotland. If you come to that conclusion – as a movement, with the SNP and everybody else, that’s why a dialogue is necessary – and that becomes your platform, then the timing of a referendum becomes very obvious.

“The timing of the referendum is either at the point of a hard Brexit, or during the transitional period that’s negotiated for a slightly less than hard Brexit.”

“You mustn’t be a prisoner of opinion polls or surveys.” Alex Salmond

However, Salmond is sceptical of allowing a second independence referendum being too heavily tied to circumstances: “Finding out as much information as you can – I think that’s an excellent thing. But you mustn’t be a prisoner of opinion polls or surveys. I called the referendum when, according to the social attitudes survey, support for independence was at 23 per cent.

“So, there’s an element of leadership in politics that’s important. And by leadership, I don’t mean one person deciding, I mean leadership in terms of those who believe in something campaigning for it and making it happen.”

The Yes campaign in 2014 was a multi-party platform and was notable for the high level of cooperation between pro-independence parties. Asked if a second referendum would replicate this model, Salmond replied: “Hopefully, we can start where we finished. Obviously, the trust and cooperation took time to build up, in between 2012 and 2014.”