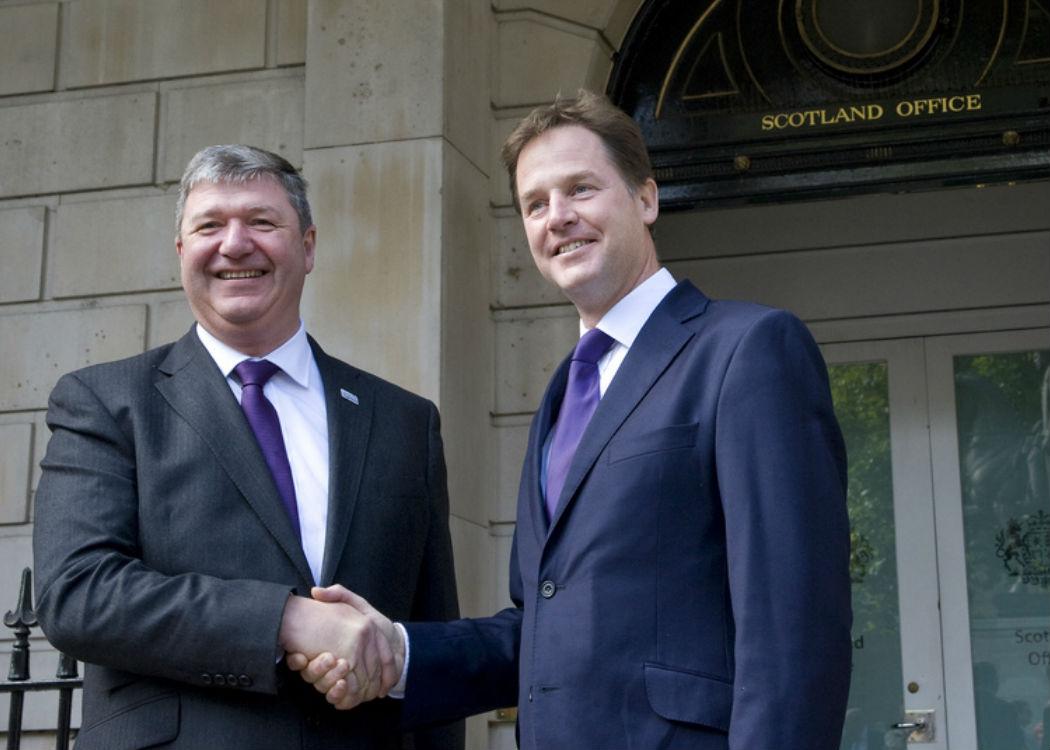 With calls growing for Alistair Carmichael to resign, CommonSpace takes a look at how the #memogate events have unfolded

French consul-general to Scotland, Pierre-Alain Coffinie, speaks to a civil servant at the Scotland Office to relay details of the meeting, as per procedure.

In the account of the conversation that is then taken, it is claimed that during her conversation with Bermann, Sturgeon “admitted she’d rather see David Cameron remain as PM (and didn’t see Ed Miliband as PM material).”

The civil servant who wrote the memo then doubts the veracity of that statement: “I have to admit that I’m not sure that the FM’s tongue would be quite so loose on that kind of thing in a meeting like that, so it might well be a case of something being lost in translation.”

Following the Scotland Office memo being leaked to the Daily Telegraph, the paper runs a story claiming that it is evidence that Sturgeon has been duplicitous and secretly wants David Cameron to be prime minister.

Sturgeon instantly denies the allegation, tweeting that it is “categorically, 100%, untrue”.

A spokesman for the French ambassador backs Sturgeon’s account of the meeting.

He says: “While the ambassador and First Minister, some time ago, discussed the political situation, Ms Sturgeon did not touch on her personal political preferences with regards to the future prime minister.”

Consul General Pierre-Alain Coffinier, whose comments are claimed to have been the basis for the leaked memo, also says that Sturgeon did not express any preference for a leader.

Scottish Secretary at the time, Liberal Democrat MP Alistair Carmichael confirms that the leak came from the Scotland Office, but denies having played a role in leaking the memo.

“I’ve told you the first I became aware of this, and this is already on the public record, was when I received a phone call on Friday afternoon from a journalist making me aware of it,” he tells Channel Four.

When asked if the leak was embarrassing for the Scotland Office, he says: “No, look this is the middle of an election campaign, these things happen.”

Alistair Carmichael is one of only three MPs, and the only Lib Dem, to survive the SNP ‘tsunami’ at the General Election as he clings on to his Orkney and Shetland seat with a vastly reduced majority.

The results of the Cabinet Office inquiry find that the memo was passed on to the Telegraph by Euan Roddin, special advisor to Alistair Carmichael.

Carmichael admits to agreeing that the memo should be passed to the press, acknowledges that its details were false and apologies for his role in the leak.

Nicola Sturgeon says Carmichael should seriously consider his position as an MP.

Demonstrations are held outside Carmichael’s constituency offices in Orkney and Shetland calling for him to stand down as an MP in order to trigger a by-election.

Meanwhile polls by the Shetland Times and Aberdeen Press and Journal show over 90 per cent of those taking part want the Lib Dem MP to step down.

“Mr Carmichael has no credibility in continuing as an MP and in my opinion he should stand down. It is appropriate for the Standards Commissioner to get involved and arrive at her own conclusions, having investigated the full facts,” he says.

Speaking on BBC Radio Orkney, Carmichael gives a convoluted explanation in response to questioning about why he previously claimed that he only knew about the memo from a journalist.

Presenter: “You said that the first that you knew about it was when a journalist telephoned you. Now that wasn’t true…”

Alistair Carmichael: “Well what was true was that the first time I had seen that document in its detail, in its text, was when I saw it published in the pages of the Daily Telegraph. The proposal came to me by staff that said ‘this is what is in this document, we think it should be put into the public domain, we believe it is in the public interest to be put out there because there is something different being said in public compared to what is being said in private.”

In response to Carmichael’s claims that he hadn’t seen the memo, the SNP reiterates its call for a formal parliamentary investigation into the issue.

The party claims that as the memo was an official Scotland note written by a civil servant it would likely have been sent to Scotland Office ministers.

The SNP’s shadow leader of the House of Commons, Pete Wishart, says: “Mr Carmichael must now explain if he was sent a copy of the memo before authorising the leak. If he was, he must then explain why he apparently failed to read his own Ministerial Papers. A formal investigation by the Standards Commissioner would help shed light on these matters, which encompass the period before the House of Commons was dissolved.”

Parliamentary Standards Commissioner Kathryn Hudson confirms that she has received a number of complaints about Carmichael.

Hudson is expected to decide over the coming days whether the matter is within her remit and whether it merits a full investigation.