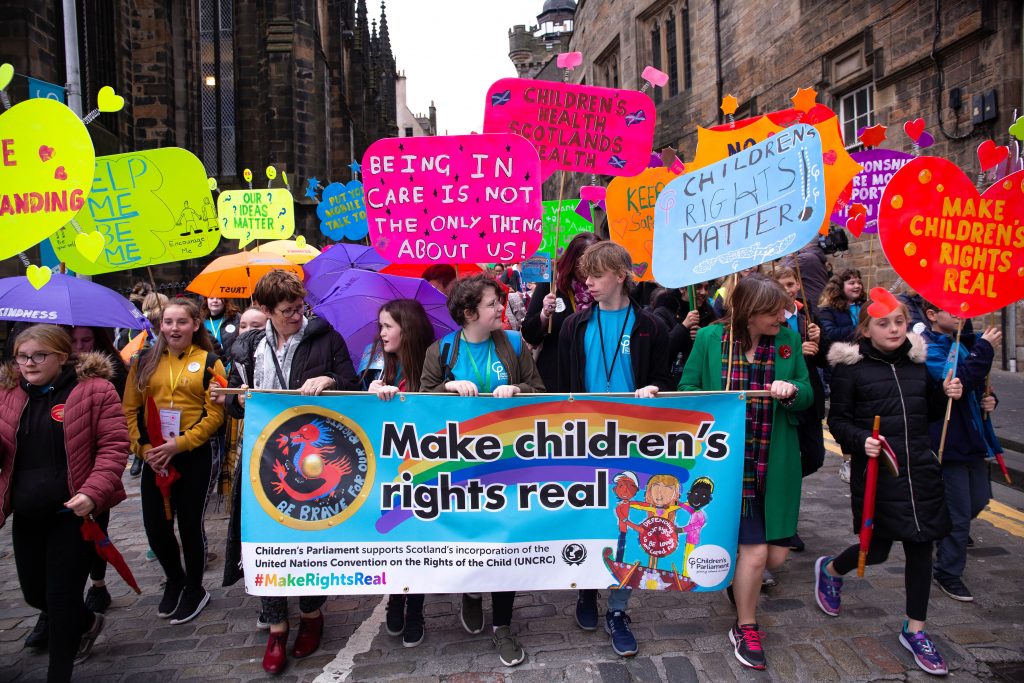 On the 30th anniversary of the UN Convention on the Rights of the Child, CommonSpace examines the state of children’s rights in modern Scotland

TODAY marks 30 years since the ratification of the United Nations Convention on the Rights of Child (UNCRC). Signed by over 190 countries, it is the most widely adopted international treaty in history. But what does it actually mean for children living in Scotland today?

The UNCRC sets out the “civil, political, economic, social and cultural rights of every child, regardless of their race, religion or abilities”, and is comprised of 54 articles. These range from the right to a name officially recorded by government to the right to choose your own friends. Read a summary here. The four core principles are:

“It’s important that children have rights because rights are not there to let us boss our parents or adults around. They are there to protect us from harm and help us grow up safe and happy.”

The above quote comes from Hannah, a 13-year-old Member of the Children’s Parliament from East Lothian. It challenges the perceptions that some adults hold about children’s rights.

“But when it comes to a lot of things that children think are important and need to be tackled by adults, they don’t have a chance to talk about them because adults don’t create that opportunity.”

One space that provides children with a platform to have their voices heard is the Children’s Parliament which, says McCulloch, demonstrates rights in practice. Established in 1996, they held a National Sitting earlier this month to celebrate 30 years of the UNCRC. They were joined for a march to #MakeRightsReal by Kate Gilmore, United Nations Deputy High Commissioner for Human Rights.

Speaking to CommonSpace about this event, Juliet Harris, Director of Together (the Scottish Alliance for Children’s Rights) said: “This shows how the international community is looking to Scotland at the moment as a leader of children’s rights to see how it is done. It’s been slow progress, but this is a tipping point.

“All eyes are on Scotland and what Scotland are going to do. So Scotland must deliver, because if we don’t then it will have ramifications for the rest of the world. And if we do, it will inspire other countries to follow our lead.”

Scotland announces it will incorporate UNCRC into law

Swinney said: “Every devolved body, every health board, every council and the Scottish Government itself will be legally obliged to make sure they respect children’s rights. And, if they don’t, children and young people will be able to use the courts to enforce their rights.

“I hope the example of Scotland incorporating the convention will spur the UK and other countries to follow suit.”

According to Harris, this is huge progress for Scotland and will make a big difference to the lives of children: “As it is at the moment, when politicians are making legislation, or when practitioners like social workers are working with children, they only need to think about children’s rights. Bringing it into law makes it binding – meaning they actually have to do children’s rights, not just think about them.”

But there’s still a way to go in terms of awareness and education around the rights of children. Speaking on this, 15-year-old climate activist Dylan Hamilton said: “We rush over the rights in schools in a way that isn’t engaging, as schools just want to be a ‘Rights Respecting School.’ Most of what I know is from my own research for campaigning.”

“[Currently], there’s not much protection for your right to expression and identification, as there’s still lots of harassment in places like schools that teachers don’t deal with effectively. When we do exercise our rights, we often get in trouble. The school strikes are demanding a seat at the table, to have our opinions listened to, but we often get told off for doing so.”

When asked what needs to be done to by those in power to improve children’s rights he stated: “I think the Scottish Government should look to educating those who work with children on the rights – if they don’t know them, then how can they protect us? There needs to be easier ways of teaching it to young people, rather than rushing through it in one PSE lesson. I think incorporating it into Scots Law will help massively.”

This lack of awareness Hamilton notes is the case right around Scotland. Many children don’t know they have rights and those that do, do not know how to claim them. Their rights are words on paper, rather than something they experience. Yet Harris is optimistic that this will change.

“International evidence shows that incorporating UNCRC law creates greater awareness of understating among adults as well as children and young people. It creates a national conversation about children’s rights and promotes better knowledge and understanding.

How are children’s rights being breached in Scotland?

While there has been much progress made in terms of children’s rights recently (such as Scotland becoming the first country in the UK to criminalise smacking children), and there will undoubtedly be more following the incorporation of the UNCRC, there are still many areas in which Scotland is failing its youngest citizens.

A quarter of children in Scotland are living in poverty, and this number is increasing rather than decreasing. Studies have shown that these children are less likely to do well in school and, while mental health is an issue for children of all backgrounds, those living in poverty are also at a bigger risk of suffering from poor mental health.

Scotland is also currently in the middle of an Independent Care Review because the care system is not working for so many. Speaking on this issue, Harris said: “Children and young people who have been in care often report that they are not listened to, they feel they don’t have any control over their lives and they don’t know their rights, let alone have a chance to assert them.”

For other children, it is the big issues where they feel their rights are not being recognised. Erin Curtis, 15-year-old climate change campaigner from Glasgow said: “By failing to adequately address the climate and ecological crisis I fear that the government runs the risk of infringing on the rights of children not just in Scotland, but across the globe.

“We have the right to be heard, to be protected, and to be able to live, and to maintain these crucial rights now and in the future, it’s time for those in power to take heed and implement real definitive action on climate change before it’s too late.”

What does Brexit mean for children’s rights?

Brexit is also a threat to the rights of children. In the case of the UK exiting the EU, rights given to children under article 24 of the EU Charter of Fundamental Rights will be removed. There is currently no plan to replace them as part of the EU Withdrawal Act. Besides this, there is a great deal of uncertainty, particularly for those whose parents are EU citizens.

There is also anger amongst children and young people who have not had the right to have their say on their own future. In a bid to give them a platform to raise their concerns, a partnership between Children in Scotland and Together initiated the Children and Young People’s Panel on Europe.

Speaking about how the Panel came about, Amy Woodhouse, Children in Scotland’s Joint Acting Chief Executive, and Head of Policy, Projects and Participation commented: “Our starting point for this was thinking about the rights of 16-17 year olds in Scotland who have vote in Holyrood elections and local government elections and also in the independence referendum of 2014, but didn’t have a vote in the EU referendum, so we’re denied a say in one of the biggest decisions the country’s made.”

The panel is made up of 20 children and young people aged 8-19 years, who in the first stage pulled together what children had been saying on this issue. They identified several priority areas including workers’ rights, opportunity to study abroad, and general uncertainty. They are now about to enter the second phase of the project.

Speaking on this, panel member Soroush, aged 13, said: “Since we met last and our report was published, Brexit is still a matter of uncertainty. We still don’t know what the end result will look like. I want to continue to promote our voice since we are the generation that will be affected the most.”

Like the Children’s Parliament and the Scottish Youth Parliament, the panel provides a space in which children can make their voices heard. This right is enshrined in Article 12 of the UNCRC, which provides the right of the child to be heard, and the right for the views of the child to be given due weight in accordance with their age and maturity.

The question still remains whether adults will listen. However, campaigners today are celebrating progress being made in Scotland.