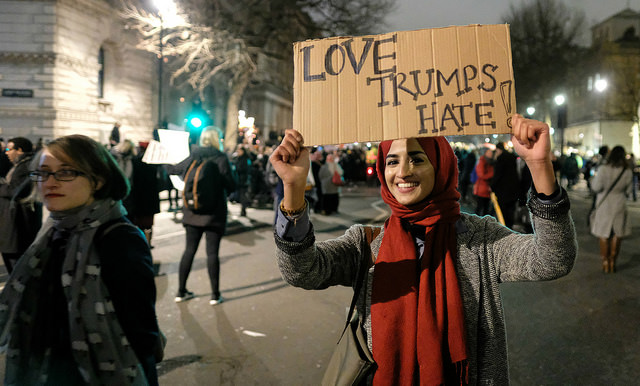 NUMBER 10 has confirmed that a working – not state – visit from US President Donald Trump is back on the cards in 2018, following a joint press conference with Prime Minister Theresa May at the World Economic Forum in Davos on Thursday.

A 38 Degrees petition against the visit set up in December, which sat at around 150,000 signatures before the renewed intentions to arrange a visit were announced on Thursday now has over 194,000 signatures.

Sharing the petition again in light of the proposed visit, 38 Degrees said: “Already 150,000 of us have signed the petition telling the government to cancel the visit.

“If 150,000 more of us sign the petition today – before Trump’s team even has the chance to book his plane tickets – we’ll take it straight to No. 10 tomorrow. The public outcry could be enough to get the government to stop his visit, before it’s too late.”

A spokesperson for Number 10 confirmed on Thursday that “the PM and President concluded by asking officials to work together on finalising the details of a visit by the President to the UK later this year”, which, it was later clarified, would be a working visit and not the more ceremonious state visit.

Both the cordial press conference, in which May emphasised the “really special relationship” between the US and the UK, and the announcement of the planned visit have invited criticism from political opponents and activists alike.

Ready for the biggest protest we’ve seen in this country for years?

Nick Dearden, director of Global Justice Now and member of the Stop Trump Coalition responded: “The most divisive and dangerous US president of modern times has once again threatened to come to Britain following an embarrassing press conference with Theresa May.

“The Stop Trump Coalition has already put Trump off coming to London twice, and we look forward to making it third time unlucky. If he does come, make no mistake, there will be massive demonstrations and protests to show exactly how we feel about this US President, and give voice to those who he has attacked and demeaned.”

At Thursday’s press conference, Trump stated that he and May were “on the same wavelength in, I think, every respect” and that any tensions between the UK and US were simply a “false rumour”.

Trump added: “I think the feeling is mutual from the standpoint of liking each other a lot.”

Whenever Trump comes we must ensure there is HUGE OPPOSITION on the streets #RacistsNotWelcome #StopTrump https://t.co/eoYqj5LjRA

Dearden said he found it “astonishing” that May could sit by while Trump said that they shared the same ideals. However, he said: “Given May’s own horrible history of demonising migrants and creating a hostile environment for them, perhaps we shouldn’t be surprised.

“We will continue working to make sure Trump understands he’s not welcome here, and to fight against those aspects of the British government’s own shameful migration policy.”

Deardon also suggested that it was May’s desperate for post-Brexit trade deals which meant she would “do whatever is necessary to ingratiate herself with Trump”, adding: “The detrimental costs to our food standards and our public services of such a deal seem of no concern to May.”

To be met by the biggest protest this country has ever seen. Who’s in? https://t.co/eQTnRxSzvS

Bloomberg report that Donald Trump advised May in a recent phone call that he would not visit the UK unless there were guarantees that he would not be met with protests, and complained of the “negative coverage” he received in the British press.

According to a poll by BMG Research in advance of Trump’s now-cancelled February visit, one in ten people in the UK said they would be likely to protest when Trump visited.

Since Trump’s Presidency began, there has been considerable uncertainty as to if and when a visit to the UK would take place and what form this might take.

Just weeks ago, Trump announced that he had cancelled a planned visit to open the US Embassy in London, citing a “bad deal” on the location of the embassy, for which he blamed former President Barack Obama.