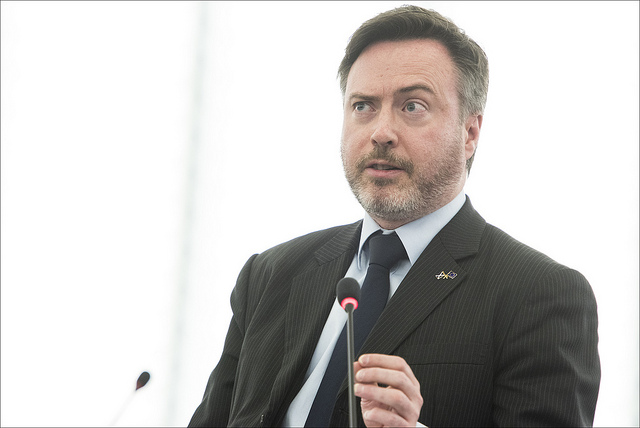 SNP MEP Alyn Smith talks to CommonSpace about Kurdistan, the EU and self-determination

SNP MEP ALYN SMITH has argued that the EU can take a constructive role in Kurdistan’s move towards self-determination following its successful but legally non-binding independence referendum.

On the first day of the SNP’s October conference in Glasgow, Smith spoke in favour of a topical resolution calling for support for Kurds in Iraq in the aftermath of their 25 September referendum, which delivered a 93 per cent vote in favour of independence.

However, the result was condemned as illegitimate by both the Iraqi Government, which did not legally recognise the vote, and the Turkish Government, which has long been opposed to the self-determination of its own Kurdish community.

Speaking to CommonSpace, Smith – who has visited Kurdistan in an effort to facilitate the process on behalf of the EU – expanded on the key points he made in support of the conference resolution, and explained what he views as the relevancy of his position and experience to the Kurdish situation.

“In Iran, facilitating the Iran deal, it worked very well; it would be difficult to say we’ve seen the same degree of success in Kurdistan.

“In terms of what we’ve been able to achieve, acting as a collective, we could achieve a lot more than we have in Kurdistan to date, which is why I was there. Obviously, it was not a legally recognised referendum – Baghdad gives it no credence, nor does Ankara, nor does Tehran. But I do believe the Kurds deserve more support than they’ve had.

Asked what specific forms of support for Kurdistan Smith would like to see, Smith answered: “I would like to see more vocal support from the EU, as the EU, as a rules-based organisation of international law. I appreciate there isn’t a lot of appetite on behalf of the member states to get into that, but I think the EU could add real value to this.

However, Smith warned that any failure on the part of the EU to positively intervene in the Kurdish situation could have consequences which many Western governments would consider undesirable.

“The concern is, if the Kurds don’t see support from the EU, from – in the old language – ‘the West’, the Russians will do it,” Smith said. “And they’ll become a client state of the Russian Government, which has shown that’s it’s not shy about such matters at all. We’ve seen Vladimir Putin be increasingly vocal about what needs to happen in Kurdistan, and if he’s the only one that is vocal, he’s the only one that’ll have the influence. So there’s a choice for the EU to make here, and I don’t think we should be bystanders.”

Asked if there was an imbalance in the level of support the wider Scottish independence movement has expressed for the independence struggle of Catalonia versus that of Kurdistan, Smith argued: “There’s obvious connections between the Catalans and us, there’s a lot of simpatico, a lot of fellow feeling. [With Kurdistan] there’s less connection because of geography and history.

“What we’re talking about is principle; we support the right to self-determination as a principle. So yes, there is more that we could be doing, but that’s why it’s good that one of our branches brought this motion to conference so that we could take a formal position.

Given that neither the Kurdish and the Catalan referendum have been officially or legally recognised by the Spanish and Iraqi Governments, CommonSpace asked Smith if a reconsideration of the nature of legality was required in the case of such plebiscites.

Smith responded: “My predecessor, Professor Neil McCormack, was part of the convention that drafted the constitution for Europe which became the Lisbon Treaty. He proposed specific articles which would have created a right to self-determination, and I absolutely agree with it.

“The international community needs to be a lot more sanguine about this, because what we’ve seen in South Sudan, what we saw in Kosovo, was much more power games and realpolitik rather than any sort of principle. I think we need to do better than that, and I think the EU could lead by example.”