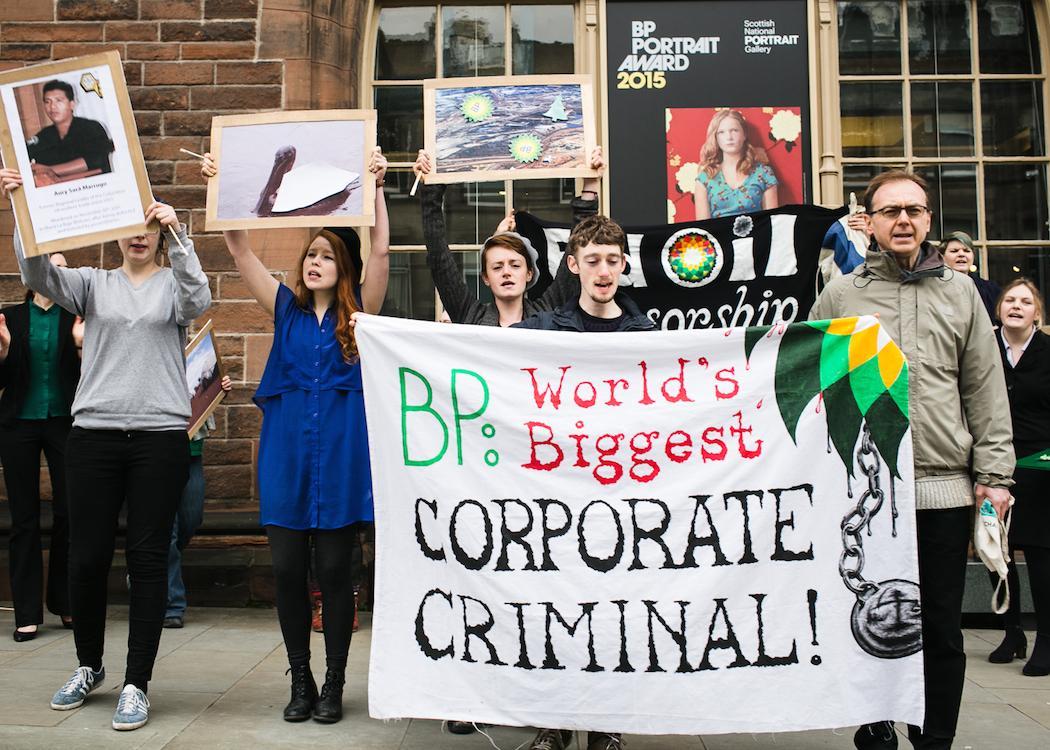 Before striding into the gallery’s beautiful great hall, calling out the first line of our script so it echoed around the normally quiet chamber, I was, to put it lightly, pretty nervous. So why did I do it?

As a former performing artist, the arts are a big part of my life, and I understand the good that art (including theatre, dance, music, design, etc.) can do in society. Art is an activity that doesn’t require consuming; it can make you think, question and debate; it brings people together; provides a therapeutic, creative outlet; and simply gives many people a lot of enjoyment.

In short, I feel the arts are too good to associate themselves with fossil fuel companies, whose businesses are so clearly destructive. BP, in particular, has an appalling track record on the environment and human rights , from the Deepwater Horizon oil rig explosion, to propping up regimes accused of serious human rights violations in Azerbaijan, Algeria, Libya, Indonesia, Columbia and further countries, to decimating Canada’s Boreal Forest and the sacred territories of the Beaver Lake Cree in order to reach the Albertan tar sands.

BP continues to lobby against environmental laws and investment in clean energy alternatives, which could save us from catastrophic climate change. When I see the BP logo on adverts for ballet , which is particularly close to my heart, it makes me feel physically sick. I want BP to get its oily hands off of the arts.

In short, I feel the arts are too good to associate themselves with fossil fuel companies, whose businesses are so clearly destructive.

The cultural institutions that accept funding from BP and Shell are getting a raw deal. The ‘big four’ in London receive only a tiny fraction of their annual income from BP: less than one per cent for the British Museum, Tate, and the Royal Opera House, and just 2.9 per cent for the National Portrait Gallery.

In return, these institutions are effectively legitimising BP’s actions, by giving the company much-needed positive publicity. Meanwhile, oil sponsorship taints the reputation of the arts and cultural institutions that accept it, especially now that more and more people are concerned about climate change, and nations around the world have signed up to a historic agreement to move away from fossil fuels and towards a cleaner, brighter future.

Last weekend’s performance is part of a wider campaign , recently developed by new ‘actorvist’ group BP or not BP Scotland . We are calling on the Scottish National Portrait Gallery to refuse to host the BP Portrait Award exhibition until a more appropriate sponsor is found, and to pressure the National Portrait Gallery in London not to renew its sponsorship deal with BP when it comes to a close at the end of this year.

Over the coming months we will widen our focus to encompass further cultural institutions in Scotland that are sponsored by BP or other fossil fuel companies, so watch this space.

BP, in particular, has an appalling track record on the environment and human rights .

Before I marched out into the gallery’s great hall, I was having some doubts about whether it was the right thing to do. The words below from artist Raoul Martinez , whose own portraits have been selected three times to appear in the BP Portrait Award, steadied my nerves and strengthened my resolve.

“That some of the nations’s leading arts institutions are still accepting sponsorship from fossil fuel companies like BP is truly shameful. These corporations constitute one of the world’s deadliest industries. Their record includes climate denial, lobbying governments against climate regulation, destroying whole ecosystems, and a long list of human rights abuses.

“Their sponsorship buys them a source of cultural legitimacy that provides cover for these destructive activities.

“There is no piece of art, no museum, worth more than the oceans, forests and atmosphere that preserve life on our planet, and so I urge all institutions to get on the right side of history and cut their ties with fossil fuel companies.

Over the coming months we will widen our focus to encompass further cultural institutions in Scotland that are sponsored by BP or other fossil fuel companies, so watch this space.

“I have decided not to submit work to the National Portrait Gallery until they do this, and hope other artists will join me. As research has shown, this is not really about money. Oil sponsorship only accounts for a few percentage points of the budgets of our cultural institutions. Alternative sources of funding could be found.

“The Scottish National Portrait Gallery has the opportunity to take the lead here and set an example for the rest of the country. Although our cultural institutions have so far failed to do the right thing, I am heartened by the growing Art Not Oil movement, in whose actions I have come to see more meaning and creativity than much of the work adorning the walls of our national galleries.”

If you agree that the arts shouldn’t be exploited by oil companies, here are some things you can do: