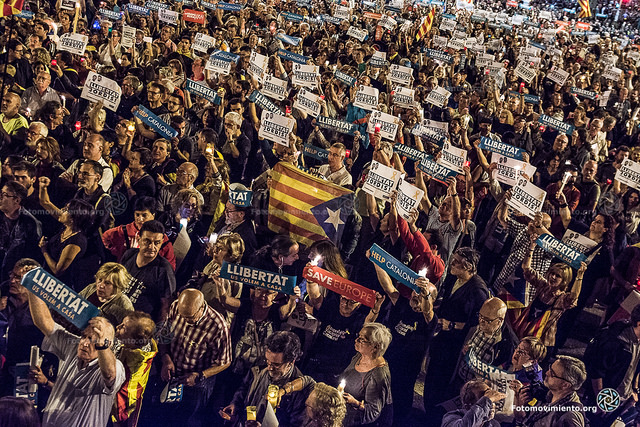 The Spanish Supreme Court yesterday refused to release Jordi Sànchez, as he “maintains his pro-independence ideology”

AMNESTY INTERNATIONAL has called for the immediate release of Catalan grassroots activist Jordi Sànchez following the Spanish Supreme Court’s announcement that he will remain imprisoned.

On Tuesday (February 6), Pablo Llarena, the Spanish judge overseeing the case explained the decision by citing “new elements” in the ongoing investigation of Sànchez, who is charged with sedition following his involvement with the Catalan independence struggle.

Llarena also argued that Sànchez could re-offend if released, as he “maintains his pro-independence ideology,” and noted that Sànchez has not stepped down from his public office as an MP in the Catalan Parliament. In spite of this argument, last week the Supreme Court also ruled that the also-imprisoned former Catalan minister Joaquim Forn would remain in custody, despite having given up his office.

Sànchez was formerly the president of the influential grassroots civic organisation the Catalan National Assembly (ANC), but resigned in order to run in the 21 December Catalan election on the ticket of Junts per Catalunya, the party of exiled Catalan president Carles Puigdemont.

“The extension of Jordi Sànchez’s provisional custody constitutes an excessive and disproportionate restriction on his right to freedom of expression and peaceful assembly.” Amnesty Europe director Gauri van Gulik

Sànchez has been in custody since mid-October 2017, having been accused of helping to engineer massive demonstrations during the 1 October Catalan independence referendum in order to prevent Spanish authorities from fulfilling the Spanish constitutional court’s order to suspend the plebiscite.

Llarena stated that Sànchez had played a major role in “the mass demonstrations that favoured a social uprising”.

Van Gulik went on to say that the charges of rebellion and sedition faced by Sànchez, along with his fellow imprisoned Catalan civic leader Jordi Cuixart, were unjustified and should be dropped, saying: “Although calling protests to obstruct legitimate police operations can – if proof is produced of their commission – constitute a public order offence, it does not constitute a serious crime such as sedition or rebellion.”

Also this week, the People’s Party, the ruling party of Spanish Prime Minister Mariano Rajoy, sought to exclude crimes of sedition and rebellion from the possibility of being pardoned, continuing the Spanish Government’s ongoing strategy of opposing the independence of the Catalan Republic by both legal and political means.