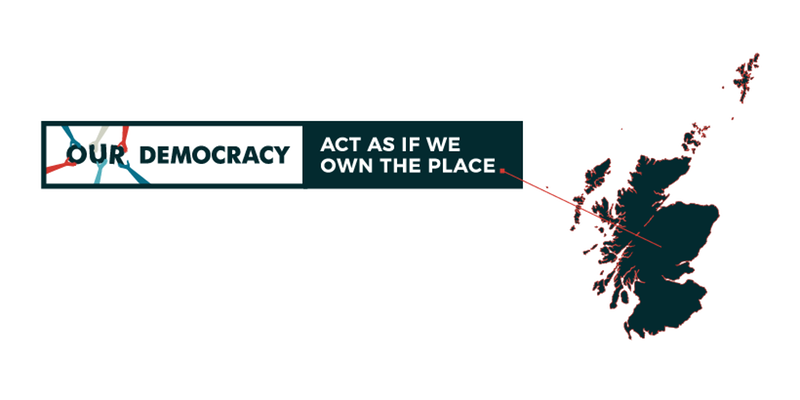 OUR DEMOCRACY, a coalition-led local democracy campaign, will host a national conference in Dundee on Saturday 21 October, highlighting the work of organisations and individuals who are changing their communities for the better and “acting as if they own the place”.

The coalition’s Act As If We Own The Place campaign, which proposes radical local government reform, has been touring the country to discuss and find solutions to local problems with communities.

The conference will feature presentations, discussions, and opportunities to socialise and build on the national network.

“We want to continue to build an active community of those interested in helping create an improved version of democracy.” Phil Connor, event organiser

Event organiser Phil Connor said: “By participating in the Amplify Our Democracy showcase, people will be inspired by real life stories of how others got involved to really change things in their local area and will get lots of practical ideas for what is possible in their own communities.

“We want to continue to build an active community of those interested in helping create an improved version of democracy fit for a changed society. This network will be a source of shared experience and advice for reformers, as well as a source of pressure for change to current practices and institutions.”

The event will include speeches from ERS Scotland, Lifetree, NewSpeak House, and journalist Lesley Riddoch speaking for Nordic Horzons, as well as ‘lightning talks’ from a range of community-led groups from across Scotland.

Director of the Electoral Reform Society Scotland Willie Sullivan will introduce the event. He said: “There is a huge opportunity for a radical local government reform agenda in Scotland.

“The Scottish Government can build a lasting legacy with bold action to make local government work closer to the communities they work for, and importantly, engage Scots across the country who want to devote time and energy to their local place.

READ MORE: Willie Sullivan: It’s time we acted as if we own the place, and here’s how we can do it 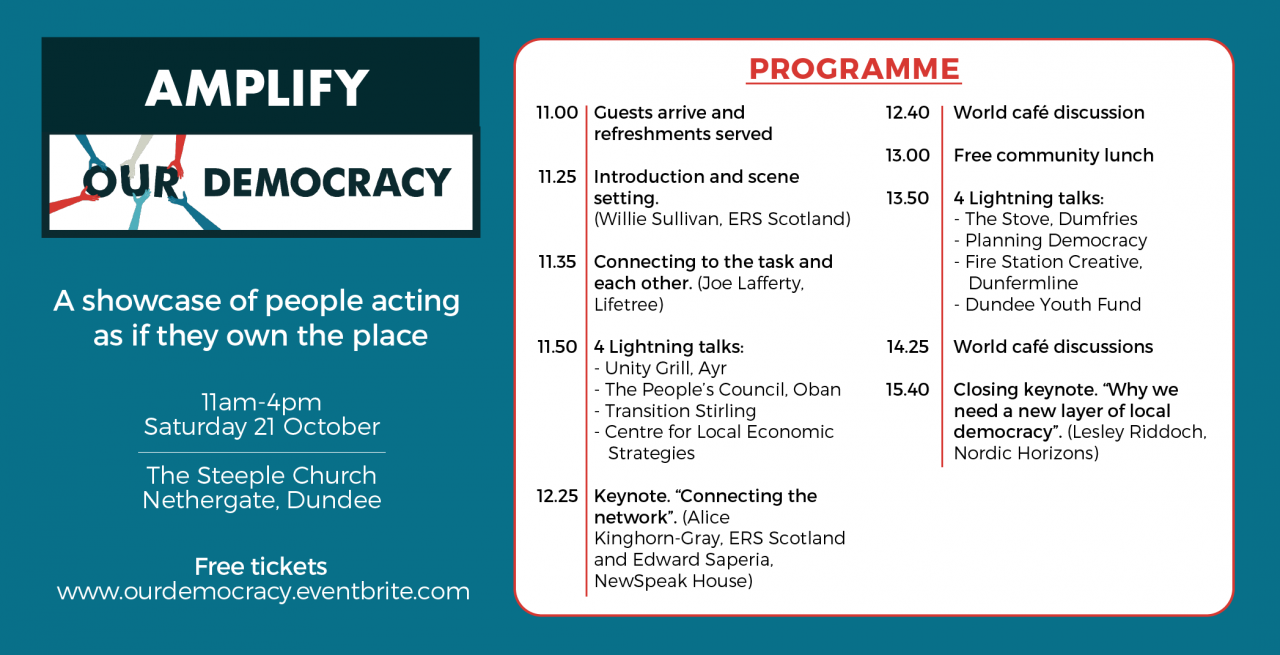 “Our Act as If We Own The Place campaign has taken this ambition to towns and cities all over Scotland. By bringing communities together to discuss problems, and work on solutions, we see that there is a potential reservoir of citizen engagement at local level – but it needs the space to flourish and the structures to thrive.

“During the course of the campaign it has been made clear that we already have scores of examples of people acting as if they own the place already. That is why we are hosting a major event under the banner: Amplify Our Democracy.

“From the People’s Council in Oban to the Dundee Youth Fund and Ayr’s Unity Grill – this event will leave no doubt that there is an exciting new chapter for Scotland’s communities that can come about with a combination of active citizens and a local government bill that pushes the boundaries.”

Robin McAlpine, Director of Common Weal, which forms part of the Our Democracy coalition, said that his experience with the campaign has convinced him that people are ready for change. “I certainly detect a very substantial interest in local democracy in Scotland right now,” he said.

“Five or six years ago there really wasn’t an awful lot of talk about giving power to communities and now we’ve been holding a series of local events across Scotland through Our Democracy and they’ve been very popular indeed.

“In fact, I think it’s got to the point where the politicians now have to catch up with what a lot of voters are saying. People want more control over their local areas and to be able to make more choices for themselves.”

READ MORE: Robin McAlpine: Why I wish we could vote in real local elections today

Clare Symonds, chair of Planning Democracy will deliver one of the lightning talks at the event. She said: “Our talk will be raising awareness of the upcoming planning bill which will likely be legislating for people to be able to develop their own local place plans.

“However there are limitations to these plans and people’s abilities to really influence how their local places are developed and designed. PD is calling for communities to have a right to appeal planning decisions. This is a fundamental right, currently being denied communities. Until communities are able to appeal decisions we argue there is little incentive to get involved in plan making.”

Angela McNay of Unity Grill in Ayr will also deliver a lightning talk, and explained why she feels events like this are needed: “I think it’s important to spread the word that communities don’t need to wait for things to be done.

“They need to feel empowered to find new ways to tackle the issues that are important to their own community. There is plenty of support and advice out there to help on the journey. Don’t be afraid to ask.”

Registration for the event is free and remains open until Saturday.

Picture courtesy of Our Democracy