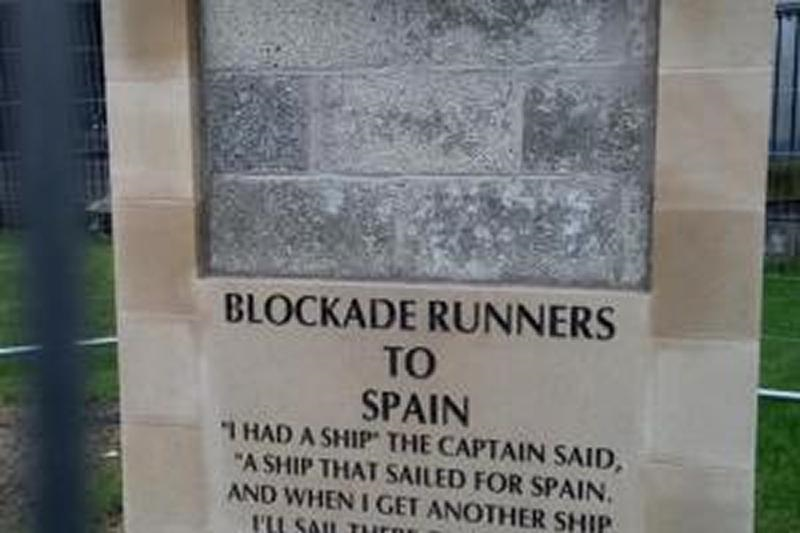 A CRUCIAL aspect of Scotland’s role in the Spanish Civil War was finally memorialised on 2 March, as a new tribute to the Scottish seafarers who helped break the fascist blockade was unveiled.

After 15 years of effort, a memorial now stands on Glasgow’s Clyde walkway to the 35 merchant navy and eight Royal Navy seafarers who died, along with scores more who were injured, while penetrating the blockade of Spanish Republican ports by the forces of the future fascist dictator General Francisco Franco.

Supported by the RMT Glasgow Shipping Branch – which was preceded by the National Union of Seamen, whose members participated in the historic operation – the memorial was designed by the sculptor Frank Casey. It now stands across from Arthur Dooley’s famous statue of Spanish communist icon Dolores Ibarruri, or ‘La Pasionaria’ (The Passionate Flower’), that stands in tribute to the 65 Glaswegians who – along with hundreds of other Scots volunteers –  fought for the Republican cause as part of the International Brigades.

Speaking to CommonSpace, an RMT spokesperson commented: “RMT is pleased that the bravery and solidarity of the seafarers who took huge personal risks to break the fascist blockade of Spain is at last acknowledged with a permanent memorial in Glasgow eighty years on.

“Their courage is a beacon and an example to us all.”

“RMT is pleased that the bravery and solidarity of the seafarers who took huge personal risks to break the fascist blockade of Spain is at last acknowledged.” RMT spokesperson

In breaking the blockade, Scottish seafarers brought vital supplies to Republican forces fighting the Nationalist uprising against Spain’s democratically elected Popular Front government, helping to sustain Republican-held cities such as Madrid, Barcelona and Bilbao that took in refugees from the conflict, but were threatened with starvation after being cut off from imported food and resources by fascist isolation.

During the war, Britain maintained a policy of non-intervention, which included an arms embargo against the Spanish Republican government. Prior the Second World War, this also meant that the troops, weapons, aerial and naval support provided by Nazi Germany and fascist Italy were largely ignored.

However, just as many British communists, socialists, anarchists, trade unionists and sympathisers volunteered in the defence of the republic, many British ships defied British policy, and the blockade was eventually broken by the Cardiff-registered Seven Seas Spray.

READ MORE: Untold story of the UK connection with children of the Spanish Civil War to be told through theatre in Scotland

Phil Gillan, a Scottish volunteer in the Spanish Civil War and a former secretary of the Scottish Youth Foodship Committee, which helped bring food to Republican forces, would later recall: “Those who did the wrong things were the governments of the day. They did not give the Spanish Republican Government the aid that they were entitled to under International Law.

“If the British Government let the country down then there were some of  us who were prepared to say, ‘Well, what the Government should have done and won’t do we’ll have a crack at and we’ll try to do something about it.’”

Picture courtesy of the RMT