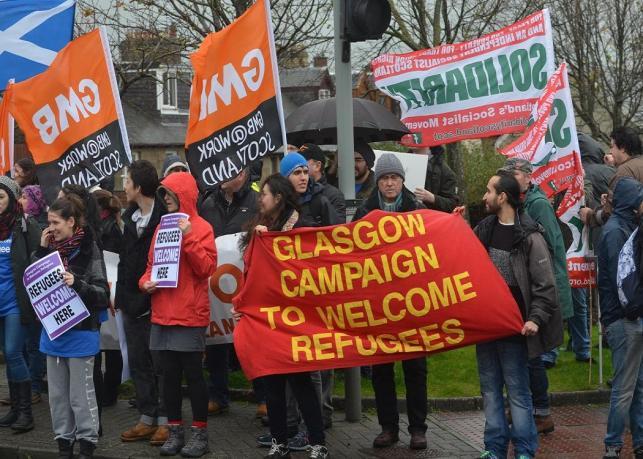 Commonspace speaks to anti-racism campaigners to find out what impact the referendum campaign has had on Scotland’s migrant and ethnic minority communities, and what might happen when Britain leaves the EU

THE UK has voted to leave the European Union by 52 per cent to 48 per cent, after a campaign dominated by anti-immigration campaigns.

Following an Out vote, CommonSpace spoke to leading anti-racist campaigners about the future for migrants and their rights in the UK.

I think that the Leave vote was above all a rebellion against elitist politics, neo-liberal economic policies and the austerity and hardship visited on ordinary people across Britain. Regrettably, the dominant campaigns on both sides of the debate – and especially the leave campaign – gave no expression to that mood but deflected it into reactionary and anti-immigration sentiment.

It's now urgently necessary that the leave vote develops in a progressive direction that leaves this reactionary froth behind and begins to properly reflect the circumstances that created it. Without an internationalist and anti-racist outlook, Britain has no viable future, let alone a decent one. This will be even more forcibly the case if Britain is outside the EU than if it is in it.

But, whether independent or not, and whether in the EU or not, Scottish political life will be crucially affected by the political response to the leave vote in the rest of the UK and across the EU. Progressive people in Scotland must engage with people elsewhere to promote an outlook that is actively anti-racist, actively supportive of immigration and immigrants, and actively internationalist. That means engaging positively with leave voters and with the politics of a leave decision.

The news this morning is nothing short of devastating for many of us in Govanhill. Since the referendum was first called, a dark cloud of uncertainty has plagued many of the EU citizens who call Govanhill their home.

The rhetoric of the leave campaign has also caused a rift between different generations of waves of immigration. Many have been made to feel unwelcome and despised. The result will only reinforce and multiply these effects. But the challenge now is to resist despair and bitterness. We must work together as a community to find a constructive way forward, one that is effective, subversive and one that is focused on the wellbeing of all people.

I’m extrmely shocked. The British public have been lied to by a cabal of rightwing racist extremists who have placed immigration at the forefront of the basis for making decisions about the European Union. In reality, they lied in exactly the same way they lied to the Scottish public during the independence referendum.

We’re now likely to see the most rightwing racist government ever since the time of Thatcher. That will clearly have an impact on the muslim community, on refugees, immigrants, as well as on ordinary working people in this country.

When you consider the attacks that will take place on public services, health, education, the scapegoat will once again be the immigrant community, the ‘incomers’. They’ll play the same race card and it’s an extremely dangerous moment. Many people – asylum seekers, refugees, immigrants, are going to be frightened and scared of what they’re facing.

What these individuals have done – Nigel Farage, Boris Johnson – is mimic the policies and politics of the far right. You can see how the next attack will be on the ECHR – it’s all very well to raise the cases of Abu Qatada, deporting terrorists –  but they don’t focus on the great work done by ECHR, for workers, for refugees fleeing terror.

We’re going to see a fundamental attack on the values of this country, the human rights we’ve taken for granted for so long. It will lead to more racism. A racist rightwing government is going to demolish the gains of ECHR. Fundamental attacks on the right to asylum, the right to legal aid – turning back of the clock to the 1970s.

I’m in the high court today, and many lawyers are extremely upset about the vote, because fundamental human rights are under threat. We could now see the right to legal representation thrown out. It will be a fundamental abuse of our justice system.

We’ve just removed ourselves form an organisation that acted as a buffer, meant we could be immune to a certain extent from the problems other economies have. The only way forward now is for Scotland to try and remain in the EU and fight for independence.

There’s apprehension from new migrant communities in particular following this vote. Scotland’s always been an inclusive society, that has a major impact, and we’d hope that despite all this we can still welcome migrants. After all, we have a population that needs new talent and new skills and migrants bring all that.

The dust needs to settle with regards to what will happen to new migrants and existing communities.  A lot of nationalist rhetoric built up with the referendum campaign – immigration was key to it.

The Leave campaign wasn’t about economics; for a lot of people it was about being English, about controlling immigration. Scotland’s different because the majority have just voted to remain, and the way migrants have been welcomed is different here.