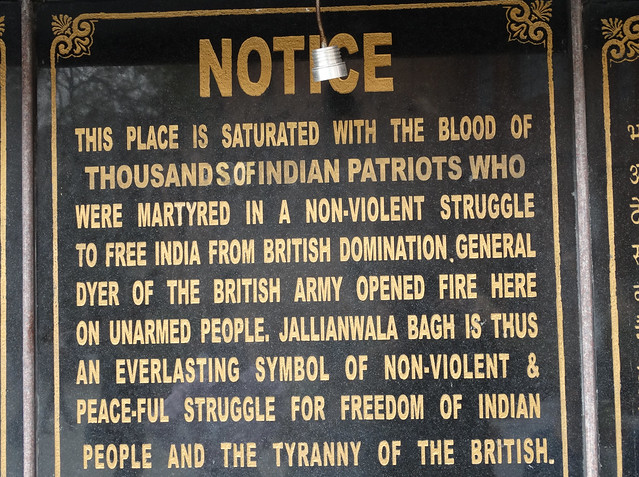 13 APRIL, 1919, was the day of Baisakhi, the traditional new year of both Sikhism and the Punjab, where it was celebrated by all communities. As a 2018 resolution of the Communist Party of India noted: “Many Hindus, Muslims and Sikhs drank water from the same glasses, shared food and gathered in Jallianwala Bagh, next to the Golden Temple.”

In addition to the celebrants, the Jallianwala Bagh was also crowded with hundreds of people from Amristsar and beyond, who had gathered in protest against the ‘Rowlatt Act’, a draconian piece of legislation designed to suppress “anarchical and revolutionary crimes” and imposed upon India by British colonial rule earlier that year. Intended to frustrate the growing movement for national independence, the act allowed for censorship of the press, arrests without warrant, juryless trials for political acts and indefinite detention. Instead of strangling the national movement, the Rowlatt Act only inflamed it, spurring widespread resistance throughout India.

The only entrance and exit to Jallianwala Bagh was a narrow gate. At approximately 5pm, as the activist Hans Raj was addressing the protest, Colonel Reginald Dyer of the British Indian Army ordered his troops to fire upon the unarmed crowd. Before doing so, he first encircled the Bagh, and closed off their only means of escape. This was no mistake or act of panic; Jallianwala Bagh was a premeditated, calculated slaughter. The killing only stopped when the ammunition ran out.

The Bengali poet Rabindranath Tagore – the first non-European to win the Nobel Prize for literature, who would give up his knighthood in disgust at the atrocity – wrote that “news of the suffering trickled through the gagged silence, reaching every corner of India.” With no hope of keeping the massacre under wraps, the Governor of Punjab Michael O’Dwyer initially admitted 291 deaths. One of the few survivors of the Jallianwala Bagh, the 15-year-old orphan Udham Singh, had a more accurate view of the death toll, a memory he held for 21 years, until he shot O’Dwyer dead in 1940.

“‘Deep regret’ is for poor financial planning, going out for one drink that turns into five, or fashion choices that seemed like a good idea when you were 16. It is not an appropriate or commensurate response to confronting the legacy of colonial atrocity.”

The truth that was apparent to Singh came out, as time passed; the subsequent Hunter Commission of Enquiry found that over 300 people had died; a further investigation initiated by the Indian National Congress concluded that the true number was more than 1000.

Attempts to ensure the significance of Jallianwala Bagh and its victims have continued in the century since it happened, and have unsurprisingly found their greatest success in the subcontinent it traumatised.

On Saturday, a ceremony will take place at the site of the massacre, although the Amristsar Police have prohibited the assembly of five or more people without permission on the city itself, following reports that planned rallies and protests may turn violent. The course of one hundred years has not dissipated the anger over Jallianwala – nor should it.

READ MORE: Analysis: Why the largest strike in history in India is a problem for the British state

The British Government deals with anger about as well as it deals with the legacy of colonialism – it either refuses to acknowledge it, or offers tokens so feeble it only serves to feed the sense of justified rage still felt throughout its former empire. That habit was on full display this week, when debate over the centenary of Jallianwala Bagh reached the House of Commons.

On Wednesday, Prime Minister Theresa May expressed “deep regret” over the massacre, saying: “The tragedy of Jallianwala Bagh of 1919 is a shameful scar on British Indian history. As Her Majesty the Queen said before visiting Jallianwala Bagh in 1997, it is a distressing example of our past history with India.”

In this, May echoed her predecessor David Cameron, who described the event as “deeply shameful” in 2013. Both prime ministers, as much of India has noticed, stopped short of issuing anything resembling the apology demanded by 80 MPs, as well as India’s Information Minister Fawad Chaudhry yesterday.

‘Deep regret’ is for poor financial planning, going out for one drink that turns into five, or fashion choices that seemed like a good idea when you were 16. It is not an appropriate or commensurate response to confronting the legacy of colonial atrocity.

It fell to UK Foreign Office minister Mark Field to put a gloss on May’s cowardice: “I have slightly orthodox views on Britain’s colonial past,” Field admitted. “I feel reluctant to make apologies for things than happened in the past.”

If one is not prepared to apologise for events of the past, it raises the question what one is prepared to apologise for. Atrocities committed in the future, or that are in the process of being committed right now? The British state has never been eager to take up any of these options. Nevertheless, the true reasoning behind Field’s squirming – and that of the government he represents – became clear soon enough.

“There are also concerns that any government department has to make about any apology,” Field continued, “given that there may well be financial implications to making an apology.”

Regret can be expressed for free; the acknowledgement of truth – and guilt – requires, by most standards of justice, some manner of recompense. Only four years ago, the Indian politician and writer Shashi Tharoor argued in support of an Oxford Union debate motion that “Britain owes reparations to her former colonies.”

Apart from its reticence to dwell on the horrors which characterised the empire it not longer possesses, but which undergirds both its constitutional makeup and inexhaustible tawdry nostalgia, the British state and its government of the day have no intention of setting the kind of precedent that could lead to even a discussion of reparations, particularly given what a fair settlement would likely entail.

If reparations are due of Jallianwala, then why not for the four million Bengalis who died in the 1943 famine, after then-Prime Minister Winston Churchill ordered the diversion of food supplies from India to top up the stockpiles of already well-supplied British soldiers and their European allies. Why should the Koh-i-Noor diamond, which has taken pride of place among the British Crown Jewels since the conquest of the Punjab in 1849, remain a part of the royal family’s dressing-up box?

“Regret can be expressed for free; the acknowledgement of truth – and guilt – requires, by most standards of justice, some manner of recompense.”

Should one looks past these individual acts of slaughter and theft, the crime of colonialism itself is a debt unpaid. In November last year, Utsa Patnaik, Professor Emeritus at Jawaharlal Nehru University’s Centre for Economic Studies and Planning, argued that Britain impoverished India by £9.2 trillion over the course of its colonial rule, a debt which has held modern India back from its efforts to escape its current levels of poverty. What might the final tally be for every other nation immiserated under British rule?

Even if the UK were prepared to consider financial reparations, there can be no repaying what Britain did to India; nothing can pay back what was taken. What can be done – the very least of what can be done – is to admit the truth. To frame that truth within an apology would show, however belatedly, that the UK is capable of looking at its past honestly. Without such an apology, professions of “regret” and “shame” ring hollow.

Whilst flailing about during Wednesday’s debate, Mark Field offered – whilst arguing that it would debase the “currency of apologies” if the UK Government is seen to make them for “many, many events” – that such discussions were nevertheless important, because they help to “draw a line” under history. His optimism is unwarranted.

At the time of the massacre, the Indian revolutionary Bhagat Singh was a 12-year-old student in Lahore. In the aftermath of the killings, he visited Jallianwala Bagh, and carried a portion of mud from its grounds, still stained with the blood of its victims. That mud is now preserved in the museum named in memorial for Singh. However much the UK Government might wish otherwise, the blood doesn’t wash away.