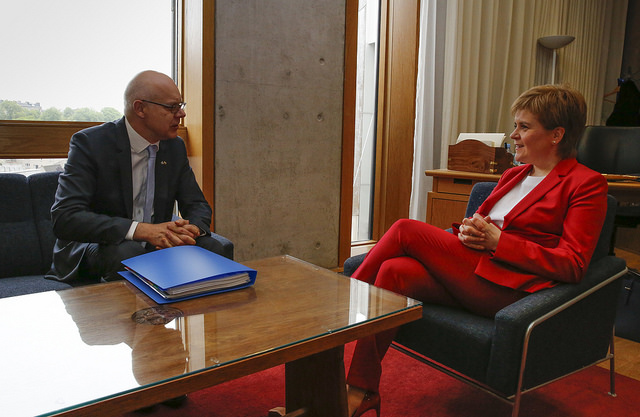 While the emphasis of the First Minister’s speech was on continuity with last year’s programme for government – which was billed as a radical renewal after the disappointing 2017 General Election result – the Programme will nonetheless require some realignment of priorities, included funding, if it is to be delivered, and comes at a time when the Scottish Government faces significant political and financial pressures.

CommonSpace looks at five of the key policy challenges that Nicola Sturgeon faces following the Programme for Government.

How to halt declining satisfaction with public services with an austerity-hit budget?

On the same day as the First Minister’s Programme was released, the latest annual Scottish Household Survey came out, which details what the public think about the things that effect their lives.

While much of it is positive, the glaring issue for the Scottish Government was the extent to which satisfication with local services has declined from 2007, when they first entered office, to 10 years later, a drop that has really occurred over the past three years of that time.

What accounts for all of that fall over the whole decade is local schools, which have dropped from 79 per cent satisfaction in 2007 to 70 per cent in 2017.

UK Government austerity has to be mainly attributable for this, which has bitten hard in recent years after continual cutbacks since 2010, totalling a real terms fall in the block grant of over 9 per cent since 2010/11 at a time when demographic pressures on public services are increasing.

But local authorities – which funds schools – have had to bear the biggest burden of the cuts, with the OECD finding that teachers’ earned 6 per cent less in real terms in 2015 than 2005 and schools had 4,000 fewer staff in 2017 than 2007. The pupil to teacher ratio has risen as a result.

Changes to Income Tax since its devolution to Holyrood have raised an additional £164 million per annum, a significant sum but not one that is going to seriously change the overall funding picture. The tweaking of Council Tax and business rates has done little to change local government revenue.

The Scottish Government’s education priority has been on structural reforms (more of which below), but it’s likely that satisfication with schools is going to have a fairly close relation to how much the government invests in teachers.

Scottish Greens co-convenor Patrick Harvie said in his response to the budget that when it comes to schools “resources not structural reforms are the priority”, but will the First Minister see it that way, and if she does, what will she do about it?

Will new Infrastructure spending go into the hands of the Carillions of this world?

But increased government spending in infrastructure has to be spent in a smart way if the money is to actually go towards new schools, hospitals and rail lines, not into the pockets of banks and construction firms. The long-term legacy of PFI in Scotland is tax money that could be getting spent on upgrading Scotland’s economy going into paying hedge fund owners of PFI consortiums four, five or even six times over the actual build cost.

PFI is no more in Scotland, but we still have the same basic financial set-up of private finance funding the up-front cash for public infrastructure projects, and the public sector paying them back through debt repayments has been widely proven to be much more costly than if the government borrowed and paid for the infrastructure directly. Not only is the PPP or NPD or Hub (or whatever you want to call it) model expensive, it is increasingly unsustainable, as the Scottish Government approaches the 5 per cent limit of its future budget which it can dedicate to debt repayments. A new model is needed.

READ MORE – Craig Dalzell: The Programme for Government is fine, but unambitious

The basis for such a model was advanced at the SNP’s Conference in June, when a motion was passed in favour of a Scottish National Infrastructure Company to replace PPP’s. The benefit of this model is it would create a public-public partnership between the new Scottish National Investment Bank and the National Infrastructure Company (potentially including a role for local authorities) to finance infrastructure investment. Not only is this cheaper, it is also safer, in terms of ensuring quality health and safety standards and in terms of ensuring no Carillion happens again, the PFI company which went bust in January and threatened a number of Scottish infrastructure projects.

Sturgeon has made the right call in prioritising infrastructure investment, but without a new public model to back it up it she will have to find the money from other parts of the budget which is supposed to go to funding day-to-day public services, and will be sending a fair amount of it into the hands of Capita and other PFI industry companies just like the now defunct Carillion, which will squeeze everything they can get out of the Scottish taxpayer while spending as little of their own money on building the schools and hospital as possible.

How to regain control of the narrative on education reform?

Sturgeon’s speech was as noticeable for what it didn’t say as what it did, and one of the subjects she avoided was the increasingly problematic issue of her National Standardised Assessments (more widely known as Standardised Testing). The tests, which include primary one children, have come in for heavy criticism from teachers’ unions and campaigners, who have established a campaign to boycott the exams after survey evidence showed it had caused young children stress and anxiety.

Meanwhile, aspects of the scrapped Education Bill continue to appear in forms that can be squeezed through as secondary legislation, but there is no sense that there is a coherent and confident plan for education reform anymore.

In her forward to the Programme for Government, the First Minister reiterated that “the defining mission of my government remains our commitment to education”, having asked to be “judged” on reducing the attainment gap following her return as FM after the 2016 elections.

One of the problems many people pointed out with this at the time is that she was asking to be judged on something that she didn’t really have control over – inequality in schools is driven by inequality in society and the economy; no structural reform to teaching will fix that. Additionally, as discussed above, resources drive teacher performance at least as much as structures do.

It was never clear that the education reforms Sturgeon embarked on were well thought out, and were certainly not widely consulted on. That left Education Minister John Swinney, who took over the brief after the key reform plans were in place, holding a poisoned chalice. But with three years until the election there is just about still time to swallow their pride, accept they got it wrong and embark on a new course which reduces the testing burden on school children and increases the emphasis on play and project-based learning to create well rounded citizens who think critically about the world.

Can the Scottish Government get their next budget passed the Greens?

The final challenge for Sturgeon is also for Patrick Harvie – who will blink first on local tax reform?

The Scottish Greens said shortly after voting through the 2018/19 budget that they won’t support Finance Minister Derek Mackay’s next budget without a commitment to local tax reform, giving the Scottish Government ample time to decide if they want to risk their next budget falling without Green support, which could mean a new election.

Sturgeon gave no indication she was interested in indulging the Greens during the Programme for Government, and Harvie responded by saying “we have our work cut out”.

“We’ll only be able to begin to discuss the next budget if the government makes meaningful progress on reform of local taxation and local tax powers,” he said.

The tweaking of the Council tax by the Scottish Government went almost entirely against the recommendations of its own Commission on Local Tax Reform, which made a clear call that the Council Tax as we know it should end. The SNP had previously said they wanted to get rid of the Council Tax when they froze it year after year, but never used their majority government to do so.

The Council Tax was introduced by the Tories in 1991 to replace the hated Poll Tax, and was seen as regressive at a time when housing inequality was significantly less than it is today. Valuations for council tax bands remain 25 years out-of-date, while the number of people struggling with Council Tax debt has reached new peaks.

The Greens want a tax which increases revenue for local government, is controlled locally, and which is levied on property/land in such a way that tackles wealth inequality and reduces the cost of housing.

The problem for Harvie is that the political repercussions from, in effect, bringing down the Scottish Government by refusing to support their budget could be severe, while Sturgeon would not want to rely on the Lib Dems, and certainly not the Tories, to pass their budget. The wording of Harvie’s remarks – “meaningful progress” – is open to interpretation: would an indication of future reform of local tax be sufficient? Would they accept a lesser reform, such as local government powers for a visitor levy? It’s likely some compromise will be needed on both sides.