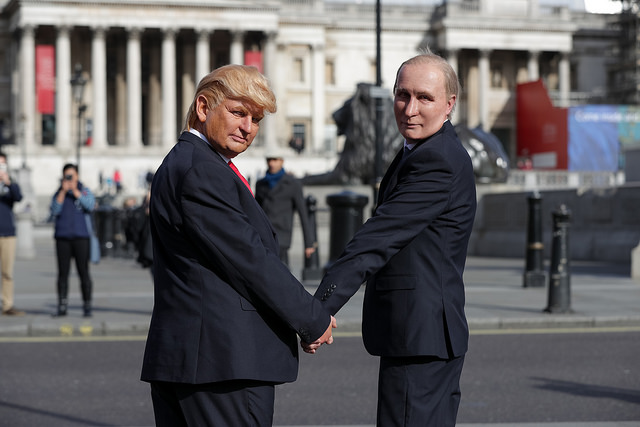 CommonSpace analyses why the Trump-Putin Summit was so significant

THE press conference following the Summit in Helsinki between US President Donald Trump and Russian President Vladimir Putin will perhaps be remembered as one of the most politically remarkable in recent memory, as the US president set himself against not just the US media and foreign policy establishment, but also his own Intelligence services.

While the Summit was low on policy outcomes, its political consequences will likely have a major influence on global politics for some time to come.

CommonSpace looks at the five key things about the Trump-Putin Summit.

The audible gasp from journalists when Trump stated that US-Russia relations “had never been worse than it is now…however that changed as of four hours ago” shows just how unprecedented the US President’s rhetorical flourish is, and potentially significant.

Forgetting the Russian interference and collusion stuff for a second, Russia has been a thorn in the US’ side on the big geopolitical issues of the day going back to 2008, when a short Russian military defeat of Georgia was the first time the country had reasserted itself in geopolitics since the end of the cold war, ending a period of complete deference to the US as the world’s superpower and policeman.

Russia under Putin’s leadership has since then been pushing the limits of its military and geopolitical power, taking advantage of American hesitancy over Syria to intervene decisively on the side of the Assad regime and seizing Crimea and funding Eastern Ukraine rebels in 2014 and after when they feared the country was falling under US control during Maiden.

Under Obama, relations seemed to get worse and worse between the US and Putin, to such an extent that the two countries almost stopped formal diplomacy entirely, with sanctions placed on the Russian President’s regime.

If one looks exclusively in terms of actions, that situation has grown more severe under the Trump presidency with new sanctions and old ones – including over Crimea – not removed, as well as new US bombing raids on Assad’s government in Syria.

But Trump’s rhetorical pivot towards “friendship, co-operation and peace” – reciprocated by the Russian President – means any attempt to build a western coalition to isolate Russia appears to be unravelling.

The meeting itself was enough for Putin to feel like Russia was being brought in from the cold by the US; the fact that Trump went out of his way to be so warm during the press conference is a bonus for Moscow.

The stunning politics of collusion and interference

None of the geopolitics of this can be separated from the constant overhang of Trump’s presidency – alleged Russian interference in the US elections, and the connected claim of collusion between the Trump campaign and Moscow.

The indictment of 12 Russian Intelligence officials by the Department for Justice on Friday [13 July] was surely timed by the FBI as a message to Trump and Putin ahead of the Helsinki Summit that no détente would be welcomed by the deep state, who have made up their minds about Russian interference.

Trump raised the issue with Putin, who issued his usual denial and call for mutual and combined investigations into Russian and US officials interference in their respective countries, but it was the response of the US President to questioning that was most significant.

He was asked if he believed his own Intelligence officials or Putin, and refused to give a clear answer, stating “I don’t see why it would be” Russia and said Putin made an “incredible offer” with respect to the mutual investigations, which Putin suggested could reveal stolen money from Russia used in the Clinton campaign.

When asked if he held Russia responsible for anything that happened, he said he held “both countries responsible, both had been foolish”, adding that the Mueller investigation “had been a disaster for our country”.

While the US media appeared stunned by Trump’s refusal to criticise Russia despite the claims of his own Intelligence services, in some ways his strategy on this makes sense. If he gives too much ground to the notion of Russian interference, he starts to look lacking in legitimacy as President. On the other hand, not taking the side of the FBI over Putin could lead to accusations of betrayal from fellow Republicans.

Trump said that he’d “rather take a political risk in pursuit of peace, than to risk peace in pursuit of politics” but it’s likely that his whole strategy towards Russia is shaped by balancing between not lending legitimacy to claims of Russian interference and not appearing to be unpatriotic in defence of American intelligence services and US democracy.

It is unlikely that the UK Government will have enjoyed what they saw in Helsinki. The word Novichok was not raised once during the press conference, and the whole positive and friendly tone clashes with 10 Downing Street’s stance.

The Novichok poisoning of the Skripals in March and the subsequent poisoning of Charlie Rowley and Dawn Sturgess in June (the latter of whom died on 8 July) has led to a crisis in UK-Russia relations at least as bad as during the Cold War, with the UK blaming Putin’s government for at least the first poisoning, and posing questions to be answered for the latter episode.

But where does Trump’s warming to Putin leave the UK, who under Theresa May’s premiership has made efforts to increase ties between Washington and London as Britain exits the EU?

Trump’s first visit to the UK last week was hardly a great success for the prime minister, with an interview Trump gave with The Sun prior to his arrival in London putting a dent in hopes that the US would sign up to a favourable trade deal, while promoting the case of PM-hopeful Boris Johnson.

Trump rowed back from his sharpest criticisms in a press conference following their meeting, but it’s hard to escape the verdict that the UK has few friends it can rely on for anything at the moment, and that what political capital it does have will have to all be used up on an increasingly desperate Brexit process, and not on fighting an increasingly isolated battle with Moscow.

It is important to note that when you look past the rhetoric, there was very little of substance here, something Washington’s powerful foreign policy establishment will use to try to rein Trump in over the coming months.

Syria, Crimea/Ukraine and Iran were all referred to but nothing concrete emerged on any of these crux issues. There was positive words on North Korea disarmament, broader non-proliferation of Nukes and international terrorism, but these are easy areas of agreement – nothing tricky was fixed.

Putin described the meeting as “the first steps to improving our relations”, but over the longer term for it to be really meaningful areas of geopolitical fissure will need to be broached, or else the hostile rhetoric will inevitably return.

An interesting little exchange took place between the two leaders on the geoeconomics of oil & gas. Trump said that the US was emerging as the number one producer of oil & gas (true) and that it would be competing with Russia to sell its black gold to Germany. Last week he had rebuked German leader Angela Merkel for the new Russian-German pipeline, saying it meant Germany was a “captive” of Moscow.

Putin responded by saying the US and Russia have a mutual interest in organising global oil & gas prices such that prices stay high enough to maintain profits while not going so high as to damage industries which rely on oil & gas supply.

Trump may have some economic method behind his madness of threatening to cut military support to Europe in his fraught statements at the NATO summit last week. It may be part of extracting concessions from the US on trade. It could also partly explain Trump’s rejection of the Paris Agreement on climate change. US business has a strong interest in booming oil & gas, at least in the short to medium term, and therefore geopolitics cannot be thought of in separation.