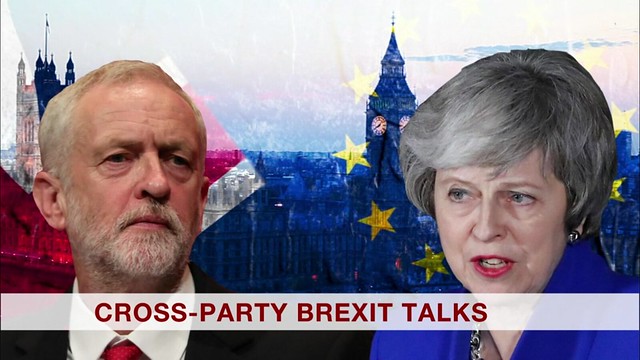 MAY’S chucked her lot in with a marxist, of all things. Or has she actually? In the bamboozling smoke and mirrors of Brexit, you have to be careful before making hard and fast statements about what’s going on.

Using the problem solving principle of Occam’s razor – that simple solutions are more likely to be correct than complex ones – we can with some confidence say the following about May’s pivot towards the opposition:

All of these things are almost certainly in play, but the most important for the Prime Minister – who has already declared she will leave office when the Deal is agreed – is to get the deal done, and her options to do so have become shrinkingly small. The fact that she is elevating a man who May has herself called the biggest threat to Britain’s economy is a problem for her, but it is really the next PM’s problem.

It’s possible that the Tory party is so apoplectic that they could seek to bring May down, potentially with a manoeuvre involving Cabinet resignations, especially if the May-Corbyn deal is anything more than a ruse. But that would almost certainly trigger a General Election, which would require a long article 50 extension to facilitate. The really horrible reality for the likes of Jacob Rees-Mogg and Boris Johnson is that they may hate May, but they have more to fear from facing the people.

What about Corbyn? It almost goes without saying that having his finger prints all over a Tory Brexit is not a good idea, and neither is allowing the Prime Minister to string the parliament along for awhile later before she can attempt one final blackmail attempt – MV4 – where it’s her deal or nothing again.

These are risks, but the Labour leader knows they are manageable risks. The fury of the Conservative party about a Customs Union Brexit deal means that if it is a Tory Brexit, it’s one despised by the true blue variety of Tory. And while No Deal is still on the table, the parliament has made it absolutely clear that it won’t tolerate such a thing: the vote in parliament on Wednesday with a majority of one in support of Tory MP Oliver Letwin’s motion forcing an article 50 extension vote even if the government doesn’t want it, means any Cabinet attempt to manufacture No Deal – something the Cabinet has always been opposed to (press reports that the Cabinet meeting on Tuesday was pro-No Deal turned out to be a fabrication) – would be practically impossible.

The real problem for Corbyn is the one he has had throughout his four year tenure as leader: how to stop the PLP – who mostly despise him – from all out rebellion. This time that rebellion will be in the shape of a People’s Vote, and will include backbenchers and shadow cabinet members on his left as well as right. Shadow Foreign Secretary Emily Thornberry – a loyal Corbyn supporter – has written a letter demanding a confirmatory vote for any deal agreed between Corbyn and May, with the alternative option being Remain, is on the table.

Interestingly, Corbyn’s comments following his meeting with the Prime Minister – where he sensibly tried to play down hopes of a deal being done – indicated that if he thought a deal was done which was a good deal for Labour, a confirmatory vote would not be necessary.

“The option of a public vote,” Corbyn told the BBC, was “in the event of crashing out or reaching a bad deal”.

What are the chances of agreeing to something that Corbyn could sell to the PLP? May’s team will not want to agree to anything which is called a Customs Union due to those two words being toxic in the Tory base, but Corbyn will need something which he can sell as exactly that if he can sign up to it. On top of that he will want legally binding agreements on workers’ and environmental rights.

One suspects this is more of a linguistic challenge than it is a policy one: the reality is that both May and Corbyn want soft Brexit, and the PM is not a neoliberal evangelist when it comes to issues like workers’ rights. But as political enemies who both have enormous problems with their own MPs, the political challenge of achieving that without being overthrown is a big one.

READ MORE: Analysis: With the capitulation of Boris and Rees-Mogg, the Tories are on course for their greatest humiliation

So far only people none of us have ever heard of have resigned as Ministers, while Corbyn has agreed to nothing yet so the risk of shadow Cabinet resignations has not yet raised its head. But if this implausible deal is to get anything close to coming to fruition, it surely will.

Strangely, both May and Corbyn have political reasons to pursue this: May needs a Deal to prevent her legacy being the biggest failure of a PM in British history, and Corbyn could do with getting Brexit done in such a way that doesn’t break his party and force him to pick sides in his voting base between Leavers and Remainers. The odds are on both leaders failing in that effort, but there is some method in the madness.

More likely is that May fails, the EU say they will only accept a long extension, the Prime Minister agrees, calls a General Election and resigns once the extension is implemented. Delay is a major crisis in the Tory party, but at this point there’s no viable political option which doesn’t have crisis written all over it. Kicking the can down the road is what politicians tend to do when everything else is too difficult. And if this happens, Corbyn will have been through a negotiation process which could elevate him is a statesman, something which totally undermines the Tories major attack line of him as a Putin-loving, stalinoid security threat to all Britons.

As for the SNP, First Minister Nicola Sturgeon has warned Corbyn not to fall for a May dirty trick, and have re-emphasised that their first option is not to leave the EU, and second option is Customs Union and Single Market. In practise, the SNP leader would be quite happy to paint this is as a Better Together Brexit, while a Brexit that saw the UK stay part of the Customs Union would at least deal with the headache of keeping the UK internal market together after independence, as the frictionless border on Hadrians wall would still be in place.

Indeed, BBC journalist Nick Watt tweeted that the Prime Minister has argued convincingly with her Remainer Cabinet colleagues that one of the problems of a Customs Union would be that it would undermine one of their main arguments against independence in a future referendum, which was that it would split up the UK internal market. But that’s getting us into a whole other series of debates, ones that will only become clear once the Brexit fog has begun to clear. We’re not there yet.