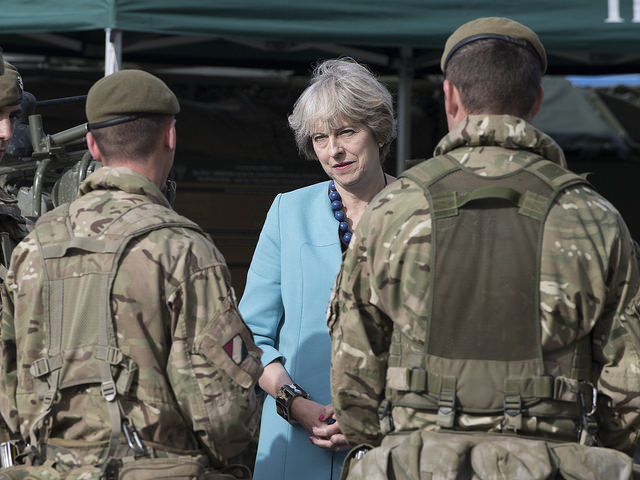 Ben Wray says organic chemist Professor Stephen Clark has punched a hole in the ambiguous language used around the Salisbury poisoning – when such language is the basis on which war is justified, we should have grave doubts

THE UK Government has now used the phrase “highly likely” to justify two extremely serious foreign policy positions in just over one month.

Prime Minister Theresa May used it first on 12 March in her statement to the House of Commons, claiming that it was “highly likely” the Russian state was behind the Novichok nerve agent used in the Salisbury poisoning. This was the basis upon which she expelled Russian diplomats and ratcheted up tensions with Vladimir Putin’s government to the highest they’ve been since the cold war.

Then on 12 April the BBC reported that the Cabinet had decided that it was “highly likely” that the Syrian Government was behind an alleged chemical attack in Douma, Syria last week. This, the BBC reported stated, was the premise on which an as-yet-unspecified UK military action in Syria would be justified.

UK citizens are being asked to trust a lot in “highly likely”. The phrase would never get close to securing a conviction in the court of law, but it could be the difference between peace and war with one of the world’s great military powers.

That “probably” came from the Defence Science and Technology Laboratory (DTSL), based at Porton Down, when their chief executive Gary Aitkenhead said: “It’s a military-grade nerve agent, which requires extremely sophisticated methods in order to create – something that’s probably only within the capabilities of a state actor”.

“Probably” means different things in different contexts, but in this context it can quite clearly be taken to be a very confident “probably”, akin to May’s “highly likely”.

CommonSpace’s exclusive report today suggests Aitkenhead’s “probably” isn’t quite as probable as many people thought. Professor Stephen Clark, the chair of organic chemistry at the University of Glasgow, has gone as far as to say that Aitkenhead’s statement is “incorrect”.

Clark is clear that he thinks the most likely explanation is that a state actor was involved, especially after the Organisation for the Prohibition of Chemical Weapons (OPCW) report found yesterday [12 April] that the chemical substance was of “high purity”, suggesting it was manufactured by experts.

But he maintains that it is still “quite feasible” that a non-state actor could have done this, pointing to his own research group and research groups across the UK, which make more complex chemical structures “day in day out”.

Clark was “appalled” that the media reporting of the Salisbury poisoning had so far missed this out, as well as other things he considers obvious, such as the example of the Tokyo subway sarin attack of 1995, conducted not by a state actor but by members of the cult Aum Shinrikyo.

Some may think that all this is muddying the waters for no reason; that Porton Down has shown its willingness to stand firm against pressure from Foreign Secretary Boris Johnson’s attempts to make the facts fit the theory that the Salisbury attack was instigated by the Russian Government. That we should just trust them.

No one is questioning the professionalism of the scientists at Porton Down. What is being questioned is the way the UK Government and Porton Down’s chief executive (who, unlike Clark, is not a scientist) can get away with using ambiguous language which is then mobilised in very non-ambiguous ways.

First, much of the public take this language to be pretty non-ambiguous – for most UK citizens, when the government says “highly likely” and a Defence lab chief executive says “probably”, they understandably take it to mean ‘government officials are completely sure but they just can’t prove it legally yet’.

So what – on its own terms – is ambiguous language, becomes unambiguous politically which then creates the context for extremely unambiguous action militarily – bombing Syria, in what BBC Middle East Correspondent Jeremy Bowen has described as a “mini world war” environment. In other words, a powder keg.

And if “highly likely” and “probably” are still good enough for you as justification for applying flame to a powder keg, you might consider two additional contexts.

1) Imagine if it was the reverse, and another government was bombing the UK based on “highly likely” and “probably” – would these qualifications be greeted with the same certainty?

2) Remember Iraq? Remember Saddam’s WMDs that never were? Remember the dodgy dossier? Remember how certain the UK Government was? Remember the findings of the Chilcot Inquiry? If in hindsight it’s not good enough, shouldn’t we place a higher evidence bar this time?