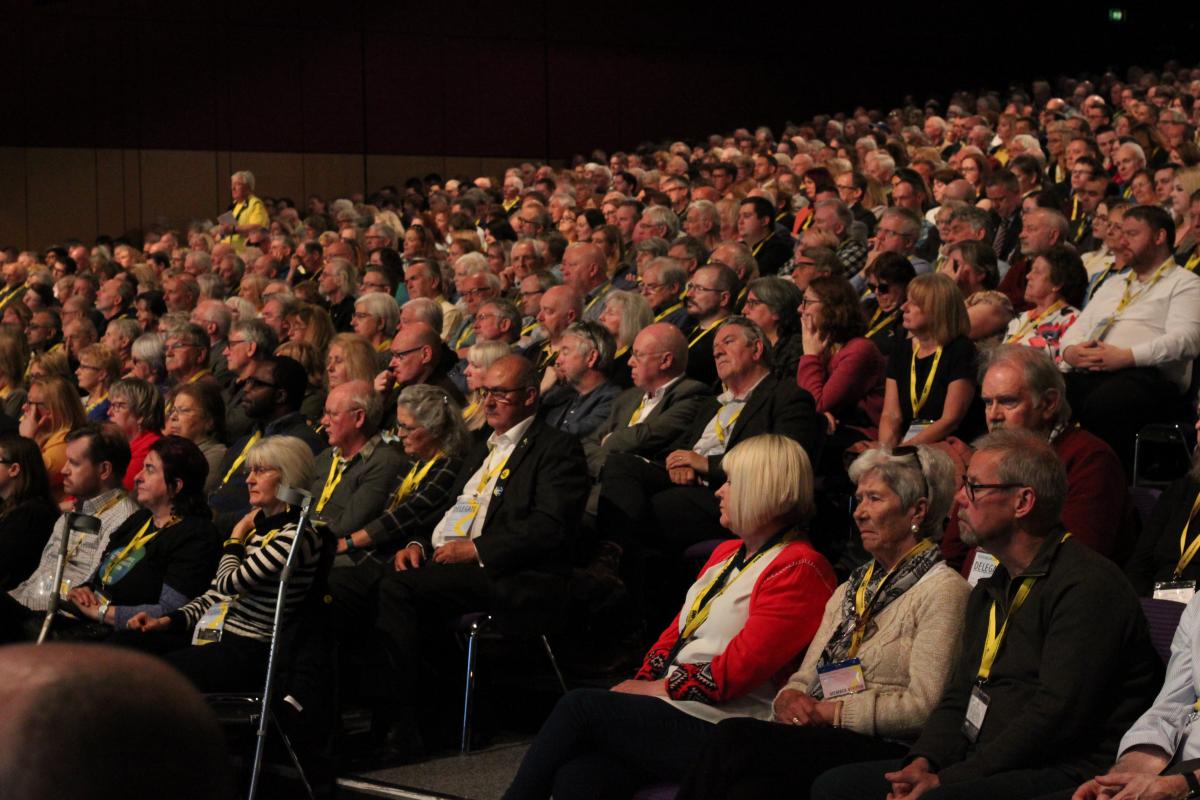 ON 27 APRIL 2019, the grassroots of the SNP showed its mettle, and proved that the independence movement is a thinking, critical and truly independent force, willing to defeat their own leaders when necessary.

The Growth Commission motion passed, but only after a revolt from below which saw an enormous 781 delegates vote in favour of amendment D, with 729 against.

The amendment scraps the annual Central Bank assessments proposed by the movers of the motion, but it doesn’t explicitly get rid of the six tests in which the assessments were supposed to be based on.

This leaves a battle of interpretation over the outcome, with an SNP press officer telling CommonSpace afterwards that despite the movers of Amendment D trashing the six tests, the amendment was, in fact, “kind of in harmony” with the tests.

No one in the Edinburgh conference hall would have been thinking that when watching Tim Rideout propose Amendment D, and in a five minute contribution totally dismantle the case presented by the SNP leadership, including taking each test apart piece by piece. It was a virtuoso performance, which will have to be re-played repeatedly to those who deem to turn Amendment D into something it was most certainly not intended to be by its advocates. In fact, the safest interpretation of the vote for Amendment D, as opposed to B or C, was that it was the strongest and simplest in advocating for a Scottish currency as soon as possible.

Rideout’s speech was the highlight of what was a hugely precise and rigorous argumentation on the side of those in favour of the amendments to the currency motion – entirely made up of  contributions from the grassroots of the party, who provided a major rebuke to unionist stereotypes of the rank-and-file of the independence movement as brainless droids. Surely no one could have come away from those contributions thinking anything of the kind.

The speeches of the proposers of the amendments stood in stark contrast to those defending the motion, who when faced with specific criticisms of the Growth Commission ideas responded with platitudes about why we need independence to tackle poverty and claims that achieving independence, not what currency policy we have, is what really mattered in the debate. It was noticeable that advocates of the motion were all senior figures in the party – only politicians spoke in favour of the motion.

It is perhaps the most seismic defeat for the SNP leadership in the party’s modern history, but it was quite clear from the contributions that this was really about the grassroots trying to save the leaders from themselves, repeatedly pointing to the pitfalls the party’s spokespeople would be failing into if the motion was passed unamended.

It will surely have to lead to some soul-searching by Nicola Sturgeon and the rest of the party leadership. They tried to foist the Growth Commission, lead by a corporate lobbyist and with no trade union involvement, on to the membership, and use their usual media channels to push the vote over the line, expecting that would be sufficient to overcome obvious and serious disquiet. It wasn’t. Very few well-known figures in the party spoke out against the Growth Commission and the SNP leadership’s motion – this is undoubtedly a win for the party’s grassroots, and one they will have to defend from any attempt to tame their vote.

One final point: Councillor Rhiannon Spear rightly said in a point of order that the debate was far too male dominated, a point no one could surely question. A new economics has to also be an economics where women lead the debate – something all sides can surely agree on.