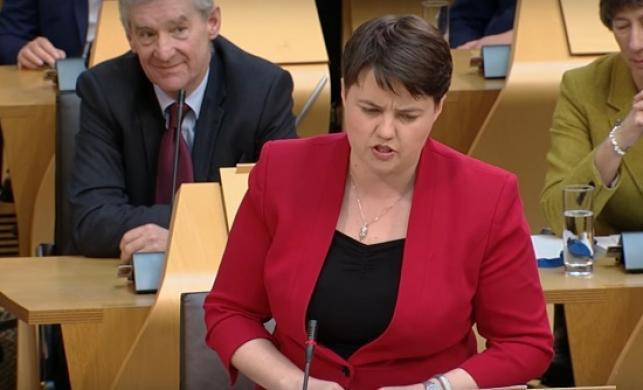 Ruth Davidson may feel comfortable opposing referendums, but the crisis of the British state will continue regardless

THERE is more that unites than divides Ruth Davidson and Boris Johnson. Despite the Scottish Tory leader’s fragile yet impeccably burnished public image, this should by now be evident.

The personalities of British nationalism’s two biggest celebrities may clash, but that is mainly due to the fact they have personalities, in sharp contrast to the bulk of the Tory party conference, the rapt attention of which both Conservative politicians used to explain their agreement on the phantasmagorical possibility known as a ‘People’s Vote’.

Obviously, Johnson and Davidson have not entirely reconciled, as evidenced by both Davidson’s public rebuttal to the former foreign secretary’s latest round of self-promoting rabble-rousing on Brexit, as well as reports today that the Scottish Tories are working to frustrate a potential leadership bid by Johnson in the near future, on the grounds that the party’s so-called resurgence in Scotland – still an odd way to describe polling more-or-less consistently under 30 per cent – could not survive the experience of a Boris triumph, regardless of Davidson’s famous ‘charm’.

Nevertheless, both have appeared at the recent Conservative Party conference in Birmingham, arguing against the idea of a ‘People’s Vote’, or a second referendum on Brexit that would include the option to remain in the European Union. The notional Remainer Davidson, having discovered the concept of hypocrisy, worries that it would be impossible for her to oppose a second plebiscite on Scottish independence if she backed such a Brexit re-run. Meanwhile, Johnson – who is trusted by few even within his own party – argues that such a vote would be “disastrous” for the people’s trust in British politics.

Davidson’s view is perhaps informed by the example of the Liberal Democrats – remember them? – whose Scottish branch are routinely and easily raked over the coals by First Minister Nicola Sturgeon for supporting a second referendum on Brexit, but not independence. On the matter of a People’s Vote, the pertinent question seems to be of which people one is referring to – the Scottish majority that voted to Remain, or the Scottish majority that voted for a pro-independence, pro-indyref government in Holyrood?

Labour, despite much self-congratulation, did not fare much better on the issue at their own conference. While Richard Leonard and Jeremy Corbyn did their inadvertent vaudeville routine on Scottish independence, it was made painfully clear that a significant pro-EU segment still exists within the Labour Party, following a draft conference motion from delegates committing the party to keeping the option of a second EU referendum on the table. The Corbynite high command, who hold the EU in no great regard but also consider Brexit an ongoing political nightmare from which they would very much like to awake, have grumbled about this, but have no firmer options to present as an alternative.

Labour’s difficulties over Brexit mirror that of the wider Scottish and British Left. Pro-EU left-wingers must, in the wake of Greece and Catalonia, demonstrate how such a union could possibly be reformed from within, especially considering it has resisted all efforts to do so. Another Europe may be possible, but a roadmap for getting there is noticeable in its absence.

Meanwhile, leftist Brexiters, beyond coddling themselves with the comforting fiction that a future Corbyn government will turn the current Brexit process into an act of anti-capitalist liberation as easily as flicking a switch, need to explain how a UK untethered from the EU will resist those wider forces of international capital that would, in all likelihood, throw everything they had at derailing an insurgent national government.

Almost 20 years ago, the anti-globalisation movement that provided such a training ground for today’s Left rallied against the near-inescapable dominance of the International Monetary Fund and the World Trade Organisation. With its obsession with the EU, it can often seem as though the current UK Left has forgotten these still relevant, still powerful enemies.

However, unlike Labour, Davidson’s latest gambit is tied to what is commonly regarded as the fuel behind her political constituency: a defence of the Union. On this – though not much else – she stands increasingly apart from Conservatives across the UK and particularly in England. Although their devotion to British nationalism is a key component of the Tories’ political identity, it has become increasingly clear that a majority of Leave voters are willing to sacrifice the Union in order to assure Brexit, in whatever form it might eventually be delivered.

READ MORE: Analysis: Why the EU has become the dividing line of Tory politics – even if it costs them the union

This is what makes Davidson’s position so unenviably untenable: Brexit, the product of a democratic deficit that ignored the vote of several of the UK’s constituent nations, is a crisis ready-made to threaten the British state, which the smarter theorists of nationalism have long suggested contains the seeds of its own destruction, regardless of how opportunistic its various secessionists may be. Davidson hopes to simplify Brexit by ruling out a People’s Vote, to assure what she considers an orderly, measured, sensible exit from the EU, and can do nothing else but stick her head in the sand when Sinn Fein spends the foreseeable future demanding a vote on unification in lieu of any non-deranged answer on the Irish border, or the Scottish independence movement refuses to obediently curl up and die.

Oddly enough, it was the centre-right columnist Alex Massie – whose unionism is unquestioned by all but a particularly unhinged breed of Spectator reader, and who an increasingly large segment of the independence movement regard as, if not politically agreeable, then at least sane – who pointed out in the Times that all of this is much to the benefit of Nicola Sturgeon and the SNP. Unlike elements within Labour and the Tories, the SNP have maintained that there is no ‘good’ Brexit to be had, and therefore have no political stake in its possibly disastrous consequences, other than shielding Scotland from their impact.

That said, the party has had its own flirtations with the idea of a People’s Vote, with Scotland’s Brexit secretary Mike Russell reiterating last week that the Scottish Government would not oppose such a referendum. However, the SNP’s has in hindsight built a tighter intellectual framework for approaching Brexit, emphasising the need for a guarantee that Scotland will not be taken out of the EU in defiance of its voting majority, and pursuing constitutional radicalism through the Continuity Bill.

Despite that piece of remarkable and defiant legislation winning cross-party support from everyone but the Tories, the focus it represents is not so useful to parties seeking to preserve the Union, which must look to the whole of the UK, while carefully overlooking the democratic injustices it carries with it.

A People’s Vote is obviously not the most important referendum in the eyes of the SNP or the wider independence movement, but it is in the context of Brexit they now consider their central goal. While many unionists crowed that the EU referendum had not delivered the public outcry in favour of independence which many had expected and hoped for, there have always been those who took the longer view – that the pro-indy case would be made more successfully once Brexit actually started to bite. Now, as her opponents twist in the wind and the SNP’s own anti-EU tendency shrinks and quietens, that scenario may be coming to pass.

Only the vocal #DissolveTheUnionRIGHTNOW brigade of the independence movement, who regard every day that dawns without a freshly announced campaign for a second independence referendum as a dangerous waste, have any problem with this strategy, despite the fact it was accepted only a few short years ago – with Quebec’s cautionary example borne in mind – that to rush into another vote too quickly, with too little preparation, could potentially take independence off the table for far more years than any such ‘long game’ strategy.

There have been calls from some for the First Minister to show leadership on how indyref2 is to be pursued; if Sturgeon delivers on this, potentially at the upcoming SNP conference in Glasgow this month, will such agitators – who generally condemn any and all who vary from the SNP mainstream as radical wreckers – abide by a strategy that is the opposite of what they demand?