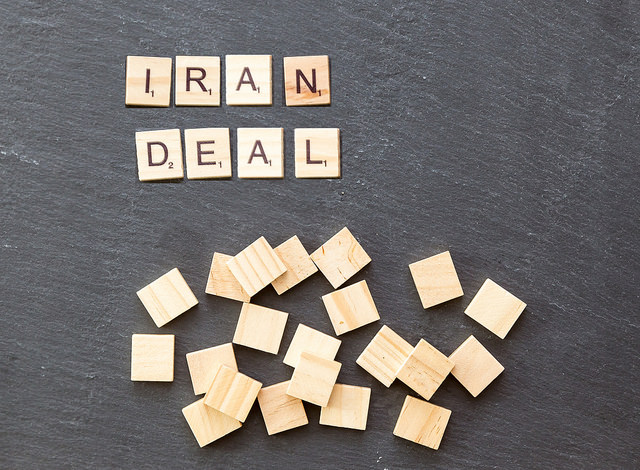 Trump’s Iran Deal pull-out is already leading to an escalation of middle eastern war, but, CommonSpace editor Ben Wray asks, will the UK ultimately continue in its role as America’s poodle?

IF YOU are in Syria or Yemen the idea that Trump’s Iran deal pull-out is going to make your life any worse would probably be responded to with a weary, bitter laugh, at best. How could it? The two countries are in ruins – populations dead, displaced or malnourished – due to the utter carnage of war.

Yet the danger of major escalation is not a debating point – it is already happening. Israel has smelled blood, utilising the US pull-out to launch its biggest attack on Syria, under the auspices that it was attacked first by one Iranian rocket launcher in the Golan Heights, a part of Syria that Israel has illegally occupied since 1967.

It’s worth noting that even if the Iranian Quds Force operating in support of the Syrian Government did decide to attack Israeli forces in the Golan Heights firing just 20 rockets (something it has denied), its actions would not be illegal under international law as it would be consistent with the UN General Assembly’s recognition of “the legitimacy of the struggle of peoples for independence, territorial integrity and liberation from colonial and foreign occupation by all available means, including armed struggle”.

READ MORE: Explainer: The Golan Heights – what is it and who does it belong to?

In any case, one has to be very short-sighted to assume Iran was the provocateur in this case – Israel has been bombing Iranian targets in Syria consistently all year, as well as Hezbollah targets in neighbouring Lebanon. Once again, this is a flagrant disregard for international law. Indeed, shortly after Trump’s announcement and before the Golan Heights episode, the Syrian regime claimed it had shot down two Israeli missiles in Syrian airspace.

Israel has in effect declared victory after the over-night bombing attacks in Syria, which according to the Syrian Observatory for Human Rights killed 23 people, saying it has wiped out almost all of Iran’s military infrastructure.

“They need to remember the saying that if it rains on us, it’ll storm on them,” Israeli Defence Minister Avigdor Lieberman threatened. “I hope we’ve finished this episode and everyone understood.”

The meaning of “everyone understood” is clear: know your place in Trump’s new Middle East, Iran. Israel is the US’s watchdog, and Iran is the US’s sworn enemy again – so we are the strong and you are the weak.

But Iran is not so weak. The carnage reaped by the US and the UK in the Middle East after 9/11, followed by the Syrian calamity, has left Iran much more influential in the region than it was pre-2001. Iran, unlike the countries brought together in the post-colonial era through Sykes-Picot, has a deep history, culture and institutions which will not wilt easily. While sanctions do threaten its economy, Trump’s pull-out has massively strengthened the position of Supreme Leader Ali Khamenei.

All of this means the mechanisms by which war in the Middle East will de-escalate, never mind being brought to an end, are increasingly hard to imagine. When the most powerful country in the world, the United States, is breaking international agreements aimed at peace and cheerleading for the country which has broken international law more than any other, Israel, it does not bode well.

If it wasn’t clear already, the US has abandoned any leadership role it once had in regards to peace and conciliation in the Middle East. Trump’s not interested. And in so doing he has let the US watchdog, led by the far-right Benjamin Netanyahu, off the leash.

Where does this leave the UK, the United States great British poodle?

Foreign Secretary Boris Johnson has said the UK will stand by the Iran Deal with its European allies, France and Germany. The stance is a rare trans-atlantic diplomatic breach, although it is not clear at all that it will mean much practically – UK, French and German corporations doing business with Iran would have to either not have any business with the US (unlikely) or be willing to feel the brunt of Trump’s sanctions.

The most likely outcome is that, like Trump’s rejection of the Paris Agreement, the UK will continue to disagree in theory with the US on the Iran deal but continue to be its poodle in practice. If there is an escalation into all out war between Israel and Iran, Boris will do what he’s told by Uncle Sam. Just because this is the most likely outcome, it does not make it any less pathetic or dangerous.

All of this is occurring on the day that the UK Government was forced to apologise for its role in the detention and transfer of Fatima Boudchar and Abdul Hakim Belhaj by MI6, who were captured in Bangkok while attempting to fly to London to secure asylum. They were then tortured at the behest of then Libyan dictator Colonel Gaddafi.

The Guardian’s long-read by Ian Cobain on the Belhaj case exposes the horrific tale in detail. It begins by detailing how MI6 were brought on board with the CIA’s plan with a three hour pitch, which then MI6 counter-terrorism chief Mark Allen initially responded to by describing it as “blood curling”.

But the deep state quickly got into line with Prime Minister Tony Blair’s war drums, so eager was it to please the United States that it fully embraced the extraordinary rendition flights and worldwide torture network led by the CIA in wake of 9/11.

Further down, Cobain writes: “These hitherto-secret documents offer a unique glimpse of a realpolitik that would be unimaginable had it not been detailed on one page after another. They show that, in their eagerness to get close to Gaddafi and influence the dictator’s future conduct, Britain’s intelligence agencies were prepared to commit serious human rights abuses on his behalf.”

We really need to do some soul-searching about what the UK Government does in the world in our name on the basis of its “special relationship” with the world’s leading superpower. We’re not the good guys in all of this. Far, far from it.