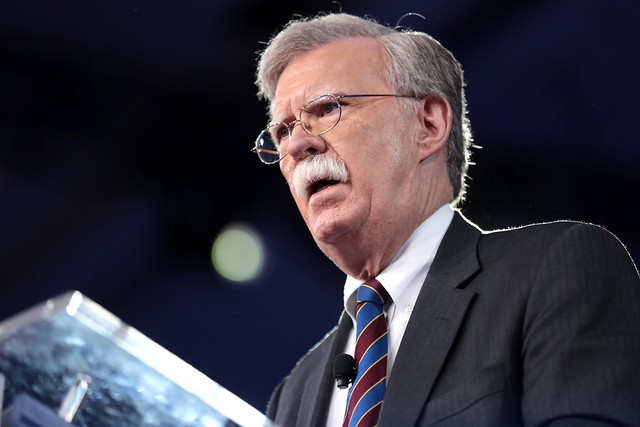 The ejection of the former White House national security advisor has been understandably celebrated – but US foreign policy may not change as radically as some might hope, Sean Bell finds

THERE has never been a situation – or, for that matter, hemisphere – that has been made less safe because John Bolton wasn’t there to intervene.

Amongst those whose lives have landed in the firing line of Bolton’s particularly nasty brand of neo-conservatism over mutiple presidencies – in essence, the entire world sans the United States – there has understandably been much rejoicing over this week’s announcement that the now-ex-national security advisor to the White House and full-time Teddy Roosevelt cosplayer has been fired/resigned/who cares? With causes for celebration being as few as they are in the era of Trump, they should be allowed that, before caveats are considered.

Bolton was, unlike some of Trump’s circle, not a creature produced by the current presidency, but a monster of a finer vintage, which is why the delight at seeing his retreat from the corridors of power has been a truly intergenerational exercise.

Baby Boomers may first have become aware of him during the Reagan and Bush administrations, where he flitted between the departments of state and justice under the tutelage of the undead segregationist Jesse Helms, obstructing reparations to Japanese-Americans interned during the Second World War and doing his part in the sordid enterprise of Iran-Contra.

Older millennials will instead remember Bolton as perhaps the most bloodthirsty adjunct of the George W. Bush White House, which pulled off a truly global bit of trolling by appointing him the US ambassador to the United Nations – an organisation which Bolton grumbled should not exist, since the international community required only American leadership, along with the certainty of what would happen to any nation incautious enough not to offer fealty.

After spending the Obama years in the American conservative equivalent of hibernation – offering punditry on Fox News while raising ungodly amounts of money for Republican candidates via the ‘John Bolton Super PAC’ and making precisely the kind of deals one would expect with Cambridge Analytica – Bolton was resurrected as Trump’s national security advisor, thus inflicting his existence upon another generation.

This appointment should have put the final nail in the coffin of the stubborn campaign myth that Trump was some weird breed of anti-interventionist. For a supposed isolationist, elevating a man who had argued for regime change against Iraq, Iran, Syria, Libya, Venezuela, Cuba, Yemen, North Korea and anyone else that looked at him funny was a seemingly counter-intuitive pick. He quickly got to work, agitating for any excuse to engage in hostilities against Iranian forces and plotting a laughably failed attempt to unseat the government of Venezuelan president Nicolas Maduro.

These days, smarter analysts tend to sniff at the idea that world events hinge upon individuals, rather than the confluence and conflict of vast material forces, and with good reason – but Bolton could test one’s faith in this view of geopolitical reality. Bolton’s hand anywhere near the lever of power was more than a bad omen, because omens do not always come true; Bolton instead promised a terrible consistency. His policy was not to kill them all and let God sort it out – it was to kill them all, then re-arm so you can kill whomever comes next.

Obscenely enough, it’s largely this consistency that has seen the old monster’s departure from the Trump administration bemoaned by the kind of political commentator who will mourn the interruption of a warmonger’s career far more than they ever will for the countless thousands who have died as a result of the policies he shaped and helped enact. Bolton may have been monstrous, but he was reliably monstrous, runs the implicit argument – his neoconservative designs upon world order may have been fuelled by blood, but at least they were guided by a philosophy more coherent than whatever the president last saw on TV or read on Twitter.

The explanation currently doing the rounds is that Bolton’s exit was rooted in his boss’s efforts to secure some kind of peace deal with the Taliban, but there was a greater divide between the two: Trump, always so painfully aware of his public image, has no problem with military action, but is terrified of unpopular military commitments; Bolton, on the other hand, traffics in little else.

All this goes some way to explaining why some supposedly sane people are expressing regret at the apparent end of Bolton’s influence over US foreign policy. Trump frightens the establishment not because he ever threatened them – they know a tax cut for the rich when they see it – but because they consider him unpredictable. Not in any way that might upset the status quo which has served the ultra-rich from which he emerged so well, or even because he differs significantly from a Republican tradition – as fervently as some deny it, the current US president is the logical conclusion to where American conservatism has been marching for decades – but because he pays greater heed to the reactionary voters who put him into office than those forces who have always considered it their divine right to guide such constituencies. What Bolton considers cannon-fodder, Trump considers his base.

As for what impact Bolton’s ejection will have on world events, we should not hold our breaths for an outbreak of peace and love. Should Israeli President Benjamin Netanyahu follow through on his promise to annex the Jordan Valley and other parts of the West Bank if reelected, it would be naïve to expect this latest outrage would reverse decades of US policy on Israel where so many others barely made a dent. Trump has not needed Bolton to be an unrepentant advocate of Israeli occupation.

US foreign policy may become more Trumpian – more unpredictable, more superficial, more illogical – but that does not necessarily mean less hawkish. As the American journalist Alex Pareene observed in despair after the complimentary media reaction to Trump’s 2017 order of air strikes against Syria: “Now that Trump has learned that there is a direct relationship between a president’s body count and how “presidential” the mainstream political press considers him to be, the whole world is fucked.”

If Trump pays his usual slavish attention to those craven media voices mourning John Bolton’s absence, he may be tempted to demonstrate just how hawkish he can be without his pet vulture. Bolton may be gone, but there’s no guarantee his influence will not continue.