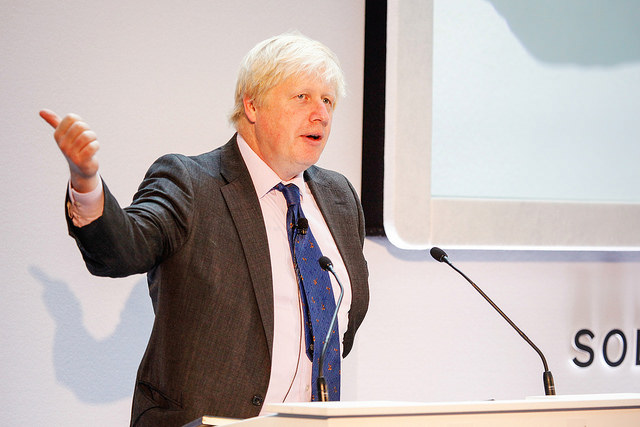 These are both some of the reactions elicited by former foreign secretary Boris Johnson’s recent declaration that money spent on historical child abuse investigations was being “spaffed up a wall”, and some appropriate descriptives that might appear on his business card.

Johnson’s remarks – made during a radio phone-in on LBC, in which he characterised the resources devoted to investigating cases of historical child abuse as “malarkey”, and questioned whether such efforts would do anything to protect the public now – will be surprising only to those entirely unfamiliar with Johnson, or his profitable (and carefully honed) persona as a kind of Conservative bile duct.

As could be predicted by anyone more tediously aware of his fondness for publicity-friendly controversialism – bumbling, perhaps, but the sort of bumbling that has allowed him to build and sustain an otherwise-inexplicably high-profile career in British politics – his latest opinions have drawn condemnation from those who take matters like justice and the safety of children more seriously.

For the benefit of anyone who shares Johnson’s lack of understanding regarding the relevance of exposing non-recent criminality, Mary Glasgow, chief executive of the victim-focused Scottish charity Children 1st, commented: “Historic child abuse investigations can stop abuse happening to children, the smallest, most vulnerable members of the public, today. They show both child and adult survivors that if you speak out: you will be heard; abusers will be stopped, and you can begin to recover and move on with your life.”

If such investigations had turned up nothing, if they had encountered naught but insurmountable obstacles and revealed no definitive evidence of wrongdoing, then they would still be worthwhile; momentary failure in the search for justice does not mean that justice should not be sought, as countless campaigners could tell you.

Yet that is not the backdrop against which Johnson decided to unveil the latest insight into the weird, broken clockwork of his thinking. Rather, his opinions came only hours after Cardinal George Pell, a former advisor to Pope Francis, was sentenced to six years in prison for an assault on two choirboys in the 1990s, making him the most senior Vatican official yet convicted for sexual abuse.

This was far from the only recent case of historical abuse to attract public attention. Over the past few weeks, the controversial documentary Leaving Neverland has reignited debate in the United States over the legacy of Michael Jackson, after featuring interviews with two men who accuse the late singer of molesting them as children.

Last year also saw Scottish Football Association chief executive Ian Maxwell issue an apology on behalf of the sports body for the “abhorrent” abuse suffered by young people under its care, in response to the interim findings of a review investigating allegations of historical abuse spanning decades. According to victim Peter Haynes, who waived anonymity in order make his accusations, the “vast majority” of victims affected by historical abuse in Scottish football have yet to come forward.

READ MORE: 8 times Boris Johnson has made bigoted remarks – and faced no consequences

Most recently, this past week has seen reports that former prime minister Margaret Thatcher personally supported former Conservative MP Peter Morrison after he was faced with questions by reporters regarding his alleged “penchant for small boys”, according to MI5 files released as part of a public inquiry (although Thatcher reportedly did not know what the accusations involved). Whether or not the renewed public interest in this case – and the involvement of the Conservative Party leader who regarded Johnson as one of her favourite journalists – had any bearing on Johnson’s apparent disinterest in cases of historical abuse is unknown, but it does render the timing of his remarks even more galling.

It is a mug’s game to expect consistency from Johnson – anyone who has followed his interventions over Brexit will need no reminding of this – but still, if he refuses to accept the arguments of victims, charities and campaigners who are entirely aware of the relevance of historical abuse investigations, then the least he could do is remember what he wrote earlier this month.

In the midst of a typically slimy column opposing the bringing of charges against those British paratroopers involved in the Bloody Sunday killings of 1972 – another case of historic injustice, which has seen developments occur this morning – Johnson acknowledged that the passage of time does not wipe away the crimes of bygone years and decades.

“Only the other day,” Johnson wrote in the Daily Telegraph on 3 March, “it was announced that an ex-Labour peer is to appear in court later this month charged for sex offences he is alleged to have committed in the 1970s. I have no idea as to the strength of the case against him – but if he was guilty then he is guilty now. No one should escape justice – where the offence is grave – just because it was all so long ago.”

No one but Johnson can say what has happened in the space of less than two weeks to change his mind. But what we can say is that pursuing the crimes of the past reminds those who might commit them in future that they cannot simply hope the world will forget.

“You can run on for a long time,” as the old song goes. But you can’t run forever.