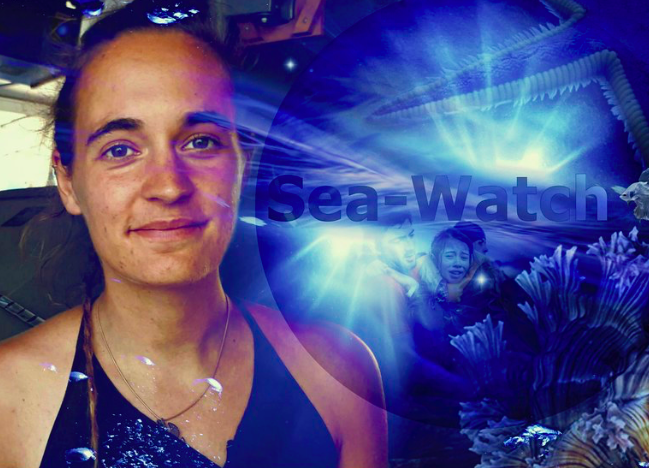 Carola Rackete risked her own freedom to save others, and showed Brussels and Rome that it’s their policies towards those fleeing war and persecution – not search & rescue efforts – which are at odds with international law

ON TUESDAY [3 July], an Italian judge faced down the Italian Interior Minister and probably the most powerful man in Italy, Matteo Salvini, and ruled that the German captain of a search and rescue ship, Carola Rackete, had not broken the law in entering the port of Lampedusa on 29 June.

Rackete was directly disobeying Italian military orders not to enter the port, and the Italian Government’s ‘closed ports’ policy against search and rescue ships disembarking migrants in Italian ports. But this was outweighed, Judge Alessandra Vella found, by her legal duty to protect human life.

Rackete was captain of the SeaWatch-3 (Dutch NGO) ship with 41 African migrants on board. She had rescued the migrants off the coast of Libya on 12 June. She was told by Italian authorities to take them back to Libya, but Rackete responded that this would be illegal under international law, as “these were people fleeing a country at war [and] the law bars you from taking them back there”.

After waiting for weeks for EU countries to approve her bringing the migrants to a dock, on 29 June, with those on board “exhausted and desperate”, Rackete decided to take the situation into her own hands.

“I have decided to enter the port of Lampedusa. I know what I’m risking, but the 42 rescued people are exhausted. I’m taking them to safety now,” she stated. She was accused by Italian authorities of ramming a police boat as she forcibly entered the port, but claims it was an accidental collision and apologised for it. Put under house arrest after disembarking, Rackete was well aware that she could face over 10 years in prison if the Italian Government’s prosecution won.

The far-right leader wasn’t so happy following the Judge’s decision that Rackete had acted legally, putting out a volley of angry tweets saying he was “indignant” and that it was “urgent to reform justice, to select and promote those who administer it in Italy and to change the criteria of recruitment”.

Sinister words indeed. Salvini’s defeat comes after passing a decree in December last year abolishing humanitarian protection for refugees and asylum seekers, a change which has led to widespread homelessness for those arriving from across the Mediterranean.  But the reality is that this is not just a problem of a right-wing populist looking to score-points at the expense of the lives of traumatised and vulnerable refugees. This is a problem that the whole of the EU bears responsibility for.

On 26 June, the European Court of Human Rights refused Rackete’s request to disembark in Italy. As Vicki Squire, Professor of International Politics at the University of Warwick, has pointed out, this decision was based on “a 2002 EU council directive that provides a legal framework for prosecuting those who facilitate the unauthorised entry, transit and residence of people travelling to the EU.”

She added: “In 2018, at least 104 people across the EU were investigated or formally prosecuted for providing people on the move with humanitarian assistance.”

Italy’s anti-search and rescue laws “have remained largely unchallenged by EU authorities so far”, Squire said, explaining that EU policy is to prevent “people on the move from arriving in the EU – regardless of where they end up”.

As Judge Vella’s ruling suggests, and UN human rights experts have said, such a policy when actively pursued is not compatible with international laws, such as Article 98 of the UN Convention on the Law of the Sea.

A statement by the UN human rights experts in May was clear that: “The right to life and the principle of non-refoulement (not sending people back) should always prevail over national legislation or other measures purportedly adopted in the name of national security.”

They added: “We urge authorities to stop endangering the lives of migrants, including asylum seekers and victims of trafficking in persons, by invoking the fight against traffickers. This approach is misleading and is not in line with both general international law and international human rights law. Instead, restrictive migration policies contribute to exacerbating migrants’ vulnerabilities and only serve to increase trafficking in persons.”

It’s Salvini and Brussels which are out of step with the rule of law, not Rackete, who in her fearless action has saved lives and exposed a system which would rather see people drown in the Mediterranean than rescue them. As if to prove the point about Libya, on Wednesday morning an airstrike hit a migrant centre east of Tripoli, killing 40 and injuring 80. This is what the Italian Government would have had Rackete send the 40 migrants back to.

Rackete, asked why she was willing to risk her freedom to save others, told the Italian newspaper La Repubblica: “I have white skin, I was born in a rich country, I have the right passport, I was allowed to attend three universities, and I graduated at the age of 23. I feel a moral obligation to help those people who did not have the foundations that I did.”

Is there any doubt that if Europe was more like Rackete we would live in a more just and free world?