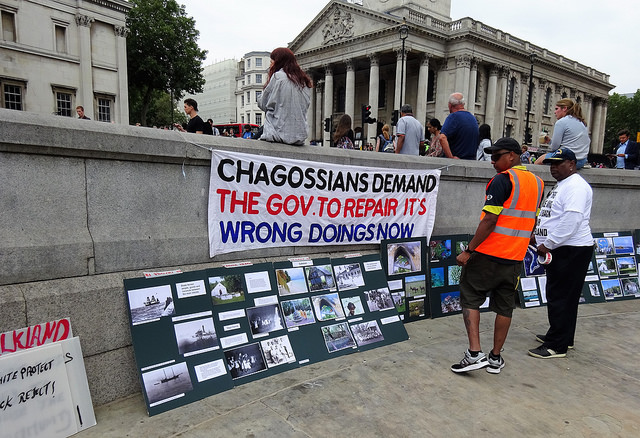 APOLOGISTS for colonialism – they’re never hard to find – are almost always willing to abuse history in order to mount their defence. Where colonialism and its mouldering leftovers endure however, the present as well as the past can become warped.

This week’s judgement issued by the International Court of Justice, the United Nations’ highest tribunal, was surprising only in that it was being delivered in 2019, and not decades earlier. The ruling made clear that the UK is “under obligation” to relinquish control of the Chagos Island to Mauritius “as rapidly as possibly”, after accepting the Mauritian argument that the British colony – beg pardon, ‘British Overseas Territory’ – was the result of an incomplete decolonisation.

The Guardian newspaper described the ruling as “a humiliating blow to Britain’s prestige on the world stage,” an interpretation that hinges on the unsourced premise that such prestige actually exists. The world – particularly those swathes of it once identified on the map by a gaudy pink – is acutely aware of what Britain once was, the historic crimes it committed in the name of empire, and – amidst the fantasies and chaos of Brexit – just how vast a gulf exists between its own self-image and the thoroughly reduced post-imperial wreckage of a state that limps on through wilful delusion and tawdry alliances.

For the benefit of the UK’s own historical illiteracy, the British press has spent this week hastily reminding its readership of what the Chagos Islands are, and what the recent judgement represents. Like many other colonies, the history of the small archipelago is one of theft, dispossession and slavery, and although the latter institution may have been abandoned, Britain never entirely gave up on the first two. Even if it could no longer treat people as property, it had no such qualms about doing so to territories half a world away.

After Mauritius was granted its independence in the 1960s, the British Government – under typically graceless pressure from their American counterparts in the Kennedy administration – decided that the Chagos Islands could still be useful, if only it wasn’t for the inconvenience of the indigenous people living there. And so, in exchange for Mauritian independence, the new nation-state was coerced into allowing British control of the archipelago to continue, as it has now for five decades. The local population – who, amazingly enough, were not consulted – were forcibly removed, in conditions that would offend livestock, whilst documentation of this process was scrupulously lost by the Foreign Office.

READ MORE: Analysis: As Belgium honours Patrice Lumumba, does the UK’s attitude to colonial memorials need to get with the times?

Once the Chagossians were resettled – those who survived the experience, at any rate – the strategic US naval base Diego Garcia was established, and has since proved useful for bombing runs in Iraq and Afghanistan, not to mention as a black site for the CIA’s torture program. The US Government, needless to say, remains opposed to any resettlement of the Chagos Islands – it has no intention of giving up its favourite hobbies.

If you wanted a snapshot of the state of postcolonialism in the 21st century, you could hardly do better that the UN General Assembly resolution which saw the Chagos case go before the court, and which passed overwhelmingly by 95 votes to 15. The Non-Aligned Movement – composed principally of states born from anti-colonialist struggle – voted for the UK to get out, while imperial powers old and new, colonial and neo-colonial – the US, Israel, France, Australia, New Zealand – banded together to try and prevent the matter from reaching the courts at all, preferring that the issue be resolved through the kind of bilateral negotiations that have been so fruitful over the past 50 years.

Thus far, the UK Government response has been typically petulant. A Foreign Office statement emphasised that this was “an advisory opinion, not a judgement” – a polite way of suggesting where the International Court of Justice can stick its advice – and argued that the Defence facilities on the ‘British Indian Ocean Territory’ help to protect the world from “organised crime and piracy”, which is ironic, considering the islands were stolen by a bunch of armed thugs who sailed under a flag that has heralded more mass-theft than the Jolly Roger ever did.

While the international media has largely recognised the significance of the ruling, the Chagos Islands – and the Chagossians’ desire for resettlement – could be seen as standing in contrast with the bulk of the ‘British Overseas Territories’, which are much beloved by the UK’s imperial nostalgists for apparently squaring the circle of colonial contradictions. The inhabitants of Gibraltar, of the Maldivas – sorry, ‘Falklands’ – and elsewhere, we are told repeatedly, do not yearn for self-determination. They consider themselves British, geography be damned, and have even said so democratically.

Such a view is complacent in the extreme. The contradictions of trying to justify British ‘sovereignty’ over territories scattered across the globe, no matter how quaint and tiny, may not be as pronounced as in the case of Chagos, but they exist, and will likely only become more apparent.

In the wake of the Panama Papers, increasing UK pressure has fallen on the overseas territories to release a central public register of beneficial owners of companies registered in places such as the Cayman Islands. Self-proclaimed anti-imperialist Jeremy Corbyn probably never thought he would be advocating for direct rule, but the UK Labour leader has argued that British dependent crown territories must obey UK tax law, and not become harbours for tax avoidance and evasion.

The problem is, many of them are perfectly happy being offshore piggy-banks for the ultra-rich, as demonstrated by Cayman Islands premier Alden McNee McLaughlin Jr’s bullish reaction to a recent report by the House of Commons Foreign Affairs Committee, which recommends such public beneficial ownership registers be implemented by 2020.

Such a move would represent a new era of neo-colonialism on the British Overseas Territories, McLaughlin warned, and should the UK Government try to implement the report’s recommendations, he would “lead the charge for independence.” So the UK Government can continue to allow its overseas territories to flout its own tax laws with impunity, or it can risk losing them by imposing some legal consistency.

Further quandaries have arisen since Brexit over Gibraltar, regarded grumpily by its neighbour Spain as a tax haven due to the much lower rates of taxation it has pursued since opting out of the EU customs union in 1972. Huge amounts of Spanish workers cross back and forth from their homeland to Gibraltar, not to mention the money that flows through its financial hubs and the vast tourism revenues generated by its gambling and gaming. The possibility of a hard border is merely the beginning of the UK’s problems.

Once the UK’s membership of the European Union ends, the EU will no longer be a neutral arbiter between the UK and Spain, with nothing stopping it from supporting its member-state Spain in all future disputes. In that context, Spain’s recent attempt to redesignate Gibraltar as a colony in EU legislation is not only mischief-making: it challenges the UK’s curious idea that you can control territories far beyond your own borders, and yet not consider yourself a colonial power (even a pathetic, self-destructive one).

And of course, there are the Falklands – or, as those parts of the world that actually surround the islands calls them, the Malvinas. The common view in recent years is that tensions surrounding the Falklands have cooled somewhat since former Argentine president Cristina Fernandez de Kirchner left power. This carefully overlooks the fact many nations throughout Latin America – generally the ones that have been at the receiving end of colonial conquest – recognise Argentina’s claim to the islands.

In November last year, Theresa May became the first British prime minister to set foot in Argentina since the Falklands War when she attended the G20 summit in Buenos Aires, and – in a kind of ‘Stars in Their Eyes’ tribute to Thatcher – emphasised that the UK’s position on the “sovereignty” of the Falklands “has not changed and will not change.” The difficulty with that is, the views of much of the global South have not changed either – and why would they?

Post-Brexit, post-Empire, the UK will find it is increasingly untenable to isolate itself from the international community, while at the same time attempting to maintain dominion over its 14 British overseas territories, imperial leftovers from a different time. That’s particularly so when the rest of the world ceases to indulge the pretence that colonies, no matter how you dress them up, can be divorced from colonialism.