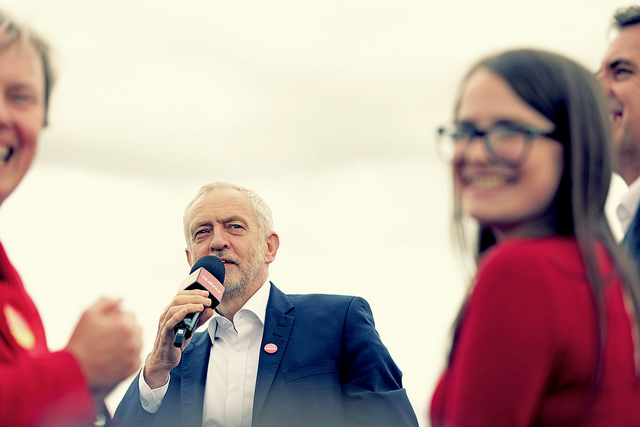 THE maelstrom over Labour’s Brexit position has been so long-running and, frankly, increasingly boring that you could be forgiven for some scepticism about whether the latest twist genuinely is a turning point.

But while some level of confusion still remains about the leadership’s priorities (is it a Labour Brexit deal they want most, or to Remain in the EU) , it does appear to be the case that Corbyn has finally went and gone full People’s Vote.

The Labour leader has been sitting on the fence for a long time, but he seems to have swung his weight towards a second EU referendum, or at least that is the way it will now be perceived. Corbyn will say he is simply following policy agreed at the party conference last year, but that will mean nothing to someone aggrieved that Labour is ready and willing to take their 2016 referendum vote and chuck it in the bin.

READ MORE: Analysis: Micro-politics isn’t enough – we must address the partition of Ireland

Labour commentator Owen Jones is acutely aware of the problem this leaves the party in constituencies in the North of England and Midlands, which posited strong Leave votes.

“Labour now has to tell its Leave voters,” Jones pleaded,” look, we tried, we resisted angry calls for a second referendum, we even had a party split over it, but the Tories’ disastrous mismanagement of it all meant we had absolutely no choice whatsoever.”

That’s not exactly a compelling narrative to sell to those who don’t follow the minutiae battles of Westminster politics, and just see that Corbyn has gone from saying he respected the Leave to wanting to reverse it.

Aaron Bastani of Novara Media argued on Twitter that the announcement “doesn’t change much.”

He added: “As many as 70/80 Labour MPs would vote against. Shadow cabinet resignations. Still doesn’t have [the] numbers.”

Bastani may well be right about the numbers, but that only compounds the political problem Corbyn is now in. Not only is he supporting a position fundamentally at odds with Leave Labour voters, but he probably can’t deliver in doing so. He therefore gives up the Leave voter terrain to the Tories (clearly cock-a-hoop about this news) while being unable to actually deliver a People’s Vote and shining a spotlight on his inability to command his MPs.

Then there’s a bunch of extremely problematic issues with the question which would be on the ballot of a second referendum, and what Labour may have to do to get that question on the ballot. Shadow Foreign Secretary Emily Thornberry has said that the vote would be between “whatever deal [May] gets through” or Remain. But if May’s Deal were to be supported by the House of Commons, that would be it: Brexit would happen and there would be no People’s Vote.

Glasgow Labour MP Paul Sweeney has said that the way around this is the shadow Cabinet will support a motion by two backbench Labour MP’s, Peter Kyle and Phil Wilson, which would see parliament support May’s Deal on the condition that it was then put to a People’s Vote.

But are Labour really going to vote in favour of May’s Deal in parliament, therefore sign-off the possibility of a Tory Brexit, in order to secure a People’s Vote where they will be campaigning against May’s Deal and for Remain? It’s hard to see how Labour could possibly win whatever the outcome of the referendum, which is by no means a foregone conclusion. It also creates a major democratic crisis in British politics: when the choices are a specific deal that the Prime Minister’s own MPs are totally divided on and does not command large support among Leave voters in the country, and the general position of Remain, it is an unbalanced referendum and shoddy democratic practice.

The deeper reality is that Labour’s enormous pickle over Brexit did not start yesterday, nor this year, and not even at the Labour conference last year – where this confusing compromise between Remain and Leave was first agreed upon. Neither is it really an issue of Corbyn’s leadership.

Labour’s Brexit crisis is deeply rooted in the tradition of Labourism which creates an artificial divide between constitutional politics and class politics, seeing the former as a distraction from the latter. That comes from a left British nationalism which sees the state as a class neutral tool that can be wielded for the interest of the many and not the few if just the right people can get their hands on the levers of power.

This politics has and will continue to lead to the sort of knee-jerk, last minute compromises and commitments which forged the party’s current position on Brexit and ‘The Vow’ in 2014, ultimately hoping that this constitutional stuff goes away, so they can get back to the ‘bread and butter’ politics of Labour being for the many and the Tories being for the few. But this strategy has already been road tested in Scotland through the independence referendum and resolutely failed. The problem? The public didn’t see the world the way Labourism does.