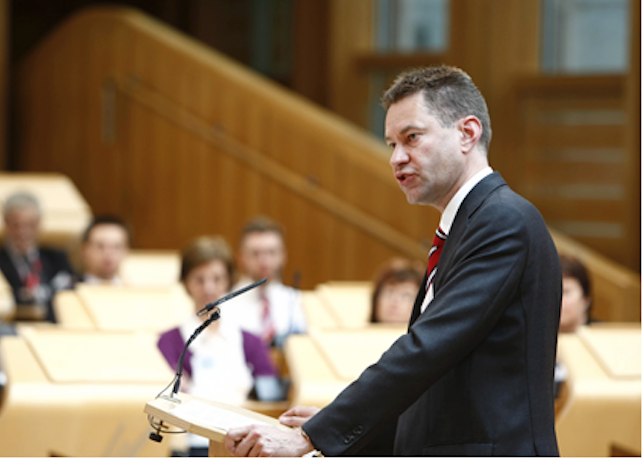 With Ruth Davidson’s popularity among UK Tory members in sharp decline as the party is at loggerheads north and south of the border, does Murdo Fraser’s idea of a break-away Scottish party have legs?

THE news that Scottish Tory leader Ruth Davidson is the least popular figure among UK Conservative members in a poll by Conservative Home comes as no surprise, but it is worth registering how far her star has fallen amongst the Tory faithful.

In May 2016, before the Leave vote and following the Scottish Parliamentary elections where she doubled the party’s seats, the same website found her to be the most popular among UK members. One Cabinet member told The Telegraph that she was the “coming powerhouse in Tory politics”, and she had to fend off questions about whether she aimed to be prime minister.

The post Leave vote Tory Party is a very different beast, and one that Davidson’s europhile, liberal brand of Conservatism does not comfortably fit into. Ally to that the increasing antipathy of the Tory Party towards Remain-voting Scotland and intolerance for Tory politicians who won’t embrace No Deal, and you have a politician that has went from hero to zero in the eyes of the rank-and-file.

Of course it was Davidson’s liberal Conservatism that led Scottish Tory HQ to heavily push her for what was a narrow victory in the Scottish Tory leadership contest in 2011, following the party’s dire results under the more socially Conservative figure of Annabel Goldie. The Scottish Tories were convinced that Davidson was going to lead them into a clear blue future, and favourable press coverage allied to her successful positioning as the authentic voice of unionism in the era of indyref, mean she largely has boosted the party’s fortunes north of the border, becoming the second force in Scottish politics, though still a long way behind the SNP.

READ MORE: Analysis: Ruth Davidson re-enters the political fray with new vigour to shut down Scottish democracy for a decade

Interestingly, the party easily could have gone in a different, more radical direction in attempting to renew the Scottish Right in that 2011 leadership contest. Davidson only just defeated Murdo Fraser, who stood on a ticket of breaking the party away from the UK one, establishing a new name and brand, in an attempt to distance the party from the toxicity of its Thatcherite past.

Davidson, the candidate of the party establishment, said that the idea of splitting was a “distraction” that would “tie the party in knots”. Following her victory and the subsequent success of the Scottish Tories, it appeared that the idea was firmly in the dustbin of history. But perhaps not.

It speaks to the fact that the Scottish Tories have once again entered a profound crisis to at least match that of 2011 that Fraser, current finance spokesperson for the Scottish Tories, resurrected the idea on Wednesday [31 July]. Fraser wrote in The Scotsman that “we should not assume that our current political party structures are either optimal, or set to last for ever. Boris Johnson’s appointment as Prime Minister has reignited the debate over whether there should be a separate Scottish Conservative Party”.

Drawing on the example of Canada and Quebec, where the Conservative party of Canada does not contest elections at the Quebec National Assembly and instead back the Quebec Liberal Party, which was successful in defeating the pro-independence Quebec National Party in the 2000’s, Fraser wrote: “While the notion of different political parties at different levels might seem unusual to us, it is the norm across Canada. Centre-right, pro-Canada Quebecers have no difficulty in voting one way in a federal election, and quite differently in a provincial one.”

The Mid Scotland and Fife MSP argued that, with the Scottish Parliament elections less than two years away, such a shift could help halt the SNP’s bid to win a majority of seats in 2021.

“I understand the concerns of Conservative colleagues who don’t want to change our relationship with the UK party,” he said. “I also appreciate that I have MP colleagues who want to be part of a bigger team, and feel that their constituents should have the right to vote directly for the party of Government in a Westminster election. But, if we were to adopt a Canadian model of political parties, that would all still be possible. The key battleground ahead for us is 2021 – the Scottish Parliament elections – where a victory for the SNP with a majority of seats at Holyrood for pro-independence parties will lead to them claiming a mandate for a second referendum.

“The priority for unionists, of all parties, must be to defeat them in that objective.”

Fraser’s bold plan has obvious upsides for the party in the Brexit era which he couldn’t mention in his Scotsman column for obvious reasons. The needs of the Right in Scotland are not served well by Boris Johnson’s Brexit strategy, with the electorate heavily skewed towards Remain north of the border. With a split, a party of the Scottish Right could be pro-Remain and pro-union, a position impossible to maintain for the Scottish Tories in the current circumstances. Davidson’s lack of popularity among UK Tory members would become an irrelevance as the party could pursue entirely independent policy positions.

Additionally, the reasons why Fraser argued for a break from the UK party in 2011 have not disappeared in 2019. In many ways, the toxicity of the party’s Thatcherite legacy now combines with the sourness in Scotland of the Brexit saga. A fresh brand can appeal to people who are instinctively right-wing but are turned off by the Tory track record.

Finally, there is a growing danger for the Scottish Tories that they could be outflanked by a revived Lib Dems, boasting a new Scottish leader of the UK party. Davidson and Jo Swinson hold similar politics, but the former is compromised in defending those politics by her UK party. If the Lib Dems can position itself as the pro-Union, pro-Remain party in Scotland, liberal small-c conservative voters could go from blue to yellow.

Of course, there is also huge dangers in even attempting to manufacture a break-away. Davidson’s view that it would “tie the party in knots” is even more true today in the Brexit era, where the Scottish Right is split between Remain and Leave. Many MPs and MSPs would simply not entertain such a break-away, and the risk of a split would be real.

The right of Scottish politics is already starting to look a bit crowded, with the Scottish Tories, Brexit Party and Lib Dems all competing in that terrain. Added to that is the fact that they are all fighting for unionist votes with the centre-left Labour Party, and a new party could mean a five way split among unionist Scotland.

Nonetheless, the break-away dilemma is a real one, and reflects a deep fissure on the right of Scottish politics that will not be easily patched back together.