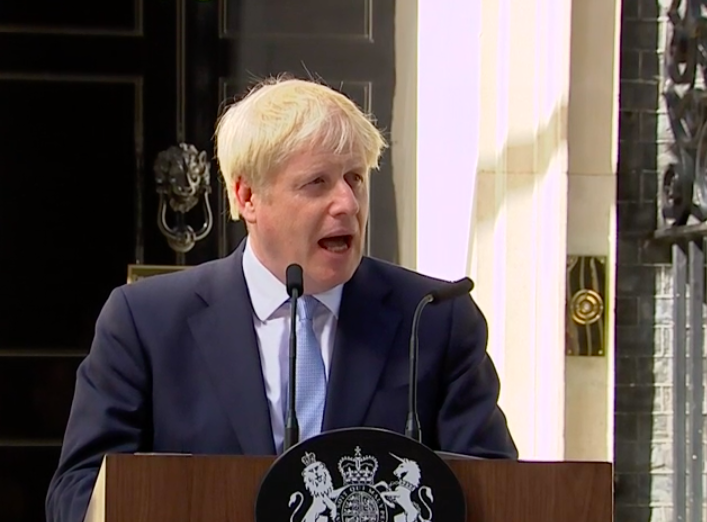 Day one of PM Boris has shown some ruthlessness and clarity of purpose – with an opposition lacking those qualities, it would be complacent to think Johnson’s British nationalism will beat itself, Ben Wray finds

THERE was interesting mood music behind Boris Johnson’s first speech outside 10 Downing Street as prime minister.

The shouts and chants of protestors echoed around as Johnson tried to assert his authority on the job from the beginning. It symbolised the moment well: Johnson got to enjoy his moment in the sun, but the stormy rumbles of discontent could still be heard.

The challenge the former mayor of London faces are well known and unquestionably formidable. He has to deliver Brexit after the parliament rejected May’s Deal three times, he has little chance of re-negotiating another deal, and there is a majority in the House of Commons against leaving without a deal.

How will he take this on? His opening speech gave some clues. He doubled-down on the 31 October deadline. He said that he would make sure Britain was prepared “for the remote possibility that Brussels refuses any more to negotiate”. Most of all, he sought to give British nationalism an energy boost, saying to Britain and to the world: “Do not underestimate this country”.

“After three years of unfounded self-doubt, it is time to change the record, to recover our natural and historic role as an enterprising and truly outward looking Britain,” he said. “Generous in temper and engaged with the world. No one in the last few centuries has succeeded in betting against the pluck, and nerve and ambition of this country. They will not succeed today.”

The final comment of significance was that he was clear the he knew his own neck was on the line over getting Brexit done, saying: “I will take personal responsibility for the change I want to see. Nevermind the backstop, the buck stops with me.”

Perhaps more significant is Johnson’s new team and the Cabinet. The campaign group behind Vote Leave, most importantly its Campaign Director Dominic Cummings, have been brought in, while the vast majority of the old Cabinet has been culled, with Jeremy Hunt and almost of all of his backers dropped from the Cabinet in the biggest clear-out of a governing party in British history.

What all of this suggests is a ruthlessness that was totally absent under Theresa May. The former prime minister responded to winning the leadership contest by lining important posts with her enemies, bringing Johnson in as Foreign Secretary and Brexiteer David Davis as Brexit Secretary. An invariably divided cabinet was part of what brought her down, and it set the tone for her Brexit-to-please-everybody, which inevitably ended up pleasing nobody.

There is at least the appearance of clarity of purpose about day one of the Johnson regime. It’s easy to look at Johnson as a bumbling clown who will inevitably jump from one Brexit mine to the next, but it would also be dangerously complacent.

Johnson’s vision may be contemptible, but it does have the virtue of actually being a vision, unlike Theresa May’s grim managerialism. It also has the value of simplicity – deliver Brexit and ‘making Britain great again’, as Nicola Sturgeon described Johnson’s speech. The Boris brand of upbeat, can-do British nationalism may well have nothing to do with the reality of 21st Century Brexit Britain, but neither did Trump’s 2016 pitch – it didn’t stop him becoming US President.

And that’s why it is not so simple as to point to the mathematics of the House of Commons and say ‘look, it doesn’t add up for Boris’, however true that may be. If Johnson can get a genuine bounce in the polls (as new PMs tend to do) over the next two months by showing unity of purpose, even if the House of Commons does face him down, he could build up sufficient political momentum around the idea that a Remainer parliament stands in the way of delivering Brexit Britain, and fight a snap General Election on that basis.

What such a strategy would have in its favour is that a clear vision and unity of purpose is lacking in the opposition. The Labour Party is in disarray, with Corbyn seemingly unable or unwilling to strike a clear line and discipline his shadow Cabinet. The People’s Vote coalition appears to be going nowhere, incapable of speaking with one voice and divided internally. The SNP seems more focused on standing with unionists to oppose No Deal than pushing forward a vision for an independent Scotland. The opposition collectively is pinning all its hopes on the House of Commons acting as a brake on Johnson, while the new prime minister is ignoring all that and appealing directly to the public.

It may not work, and it will be difficult to sustain under the pressure of events, but in a fight between someone arguing for something and others arguing to stop something from happening, the political psychology works more in favour of the former than the latter.