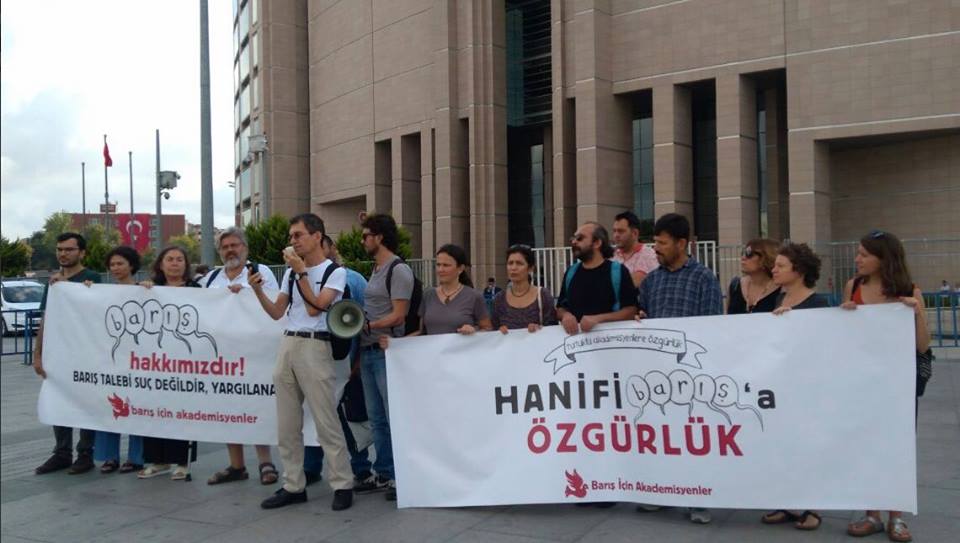 As an Aberdeen academic arrested by Turkish authorities is finally freed, Rhiannon Davies details the escalation of Turkey’s brutal authoritarianism

“DEAREST friends and colleagues, I’m finally out and free (hopefully)… I hope you won’t be facing such troubles or such violations of human rights in Turkey. That’s our hope, but we all know it will take some time to realise this hope.”

A message for you all from our dear friend and colleague @aberdeenuni Dr Hanifi Baris Thank you so much for all your support with our #FreeHanifi campaign. In love and solidarity. pic.twitter.com/AzGtMrMhyS

That was the message last night from a smiling Dr. Hanifi Barış, a lawyer & academic, who graduated with a PhD from the University of Aberdeen’s Centre for Citizenship, Civil Society and Rule of Law in 2017. He had just been released on probation by a Turkish court following the first hearing of his case, after spending 76 days in prison.

Barış, who moved from Scotland to Turkey last year to be with his wife and family, told the court on Tuesday that the headlines of the news stories and academic articles that he posted were made to look as if they were his own comments, and that photos held as evidence against him were images that accompanied them.

Friends and colleagues from Aberdeen university who led ‘The Free Hanifi Barış Campaign’ which collected 5000 signatures in a petition calling for his release, celebrated. His friend and friend and former colleague Dr. Anna Grudzińska, said:

“We are delighted with this news today. Hanifi is a brilliant academic. His writing is thought-provoking and incisive. Most importantly, he is a wonderful friend and colleague. This is probably why his incarceration united so many people and has made us rethink what the word ‘university’ really means. Namely, we believe that a university is more than people solely connected by the name of their employer or pay cheque. Instead, we see it as a community of shared values. This principal is so important particularly as we are seeing freedom of expression increasingly under threat.”

Earlier his week, the imprisonment of Joe Robinson, a former British soldier who is accused by the Turkish state of fighting alongside the People’s Protection Units of Syrian Kurdistan (YPG) in Syria was splashed across the majority of the mainstream media.

Yet while his compelling case made the headlines – along with that of the detained American pastor, Andrew Brunsun, which caused massive diplomatic waves – the real story that fights to get heard is the tens of thousands of academics, lawyers, journalists and civil servants that have been locked up in Turkey’s great purge.

The Attempted Coup and State of Emergency

Although the country was already headed in that direction, oppressive measures escalated following the attempted coup of 2016. During which tanks rolled into the streets of Istanbul, fighter jets flew over its capital and 265 people died.

In the immediate aftermath, Erdoğan referred to it as a ‘gift from god’, and immediately set about rooting out plotters, enemies and political opponents.

A state of emergency was imposed, and then extended – seven times. During this period, more than 107,000 people were removed from jobs in the public sector, and around 60,000 citizens have been imprisoned. While, there were close to half a million people investigated and, in some cases, detained.

The exact number, however, is hard to determine. Speaking to CommonSpace, Abdullah Bozkurt, director of the Stockholm Center for Freedom (an advocacy organization with a special focus on Turkey) explained that in March 2017, the prison authority stopped publishing daily data, making it impossible to cross check statements from the justice and interior ministries with actual figures.

In July, the state of emergency was finally lifted, but as stated in a report submitted to the UN yesterday: “the Turkish Parliament has successively passed legislation codifying all the measures adopted through emergency decree laws during the state of emergency, thus permanently undermining the rule of law in the country”.

According to sources, the number of people being detained on a weekly basis has remained fairly constant since before and after the state of emergency was lifted. Although those arrested may belong to different groups or movements, there are several key targets.

The media has long been in Erdoğan’s sights. Even before the coup, several newspaper groups were shut down or taken over by the state. The intensity has increase and the International Press Institute now lists 168 journalists currently behind bars in Turkey, while around 200 media outlets are known to be closed.

And it’s not just Turkish journalists who are under threat. A report published in August 2018 by the Stockholm Center for Freedom titled ‘The Clampdown on Foreign Journalists in Turkey’ documents the increase in arrests, deportations and restrictions placed upon foreign journalists, starting with the Gezi Park protests of 2013 and ramping up since the 2016 coup. It notes that:

“In an environment where Turkish journalists cannot do their job properly, silencing foreign journalists through pressure and intimidation tactics further undermines democracy in Turkey. As a result, the tragedy of thousands of people in prison who are victims of the Erdoğan regime’s arbitrary practices are not easily turned into news stories by foreign media outlets.”

Last week, Austrian writer and political science student, Max Zirngast, a regular contributor to Jacobin and other international leftist publications was taken into custody. Although the reason for his arrest was not given, supporters reported that as the reason for his detention, police referred to Max’s “support for a terrorist organization” and of “political publications”.

One of our contributors, Max Zirngast, has been taken into custody by Turkish police under the pretext of anti-terror charges. This is an appalling abridgment of democratic rights. #FreeMaxZirngast https://t.co/Cfx0YqBbmL

Dr. Hanifi Barış was one of over 2000 academics who, in January 2016, signed the Academics For Peace petition, ‘We will not be a party to this crime!’, which called on Turkey to end state violence in the Kurdish areas of south-eastern Turkey.

Since then, hundreds of the signatories have been fired, some have had their passports cancelled and confiscated, been prevented from finding jobs, been physically or verbally threatened, taken into custody, robbed of their right to work in the public sector and four have been imprisoned.

Speaking about the case of Hanifi, Abdullah Bozkurt of SCF said: “It’s part of the intimidation campaign that the Erdogan regime has been running against all kinds of critics. His case is only one part of the bigger picture.”

A UN Report in March noted that: “570 lawyers were arrested, 1,480 faced some kind of prosecution, 79 were sentenced to long-term imprisonment, and approximately 34 bar associations shut down on the ground of alleged affiliation to a terrorist organization.”

These worrying moves prompted the joint report by  the Bar Human Rights Committee of England and Wales (BHRC), the International Bar Association’s Human Rights Institute (IBAHRI) and the Law Society of England, which was submitted to the UN this week entitled ‘International Law Breaches Concerning the Independence of Legal Profession in Turkey’.

It states: “Legal professionals are being targeted with allegations of supporting a terrorist organisation. The evidence points to these allegations as being a strategy to stop the legitimate exercise of their professional duties, including human rights related work. “

It’s not just the academic elites that are under threat. Last week, a Turkish prosecutor ordered the arrest of 28 workers, who were among the over 400 detained during a strike protesting dangerous working conditions during the building of Istanbul’s controversial new airport.

The release of Dr. Hanifi Barış may come as good news to those that signed the petition, but the ongoing purge of journalists, academics, lawyers, political opponents, striking workers and journalists – basically any critical opposition –  should be a worry to us all. Without critical voices, a democracy can no longer function. The Turkish economy may be struggling and causing a dent in Erdoğan’s core vote, but if all his critics are locked up or in exile, there will be no one left to fight for change.

Picture courtesy of Academics For Peace