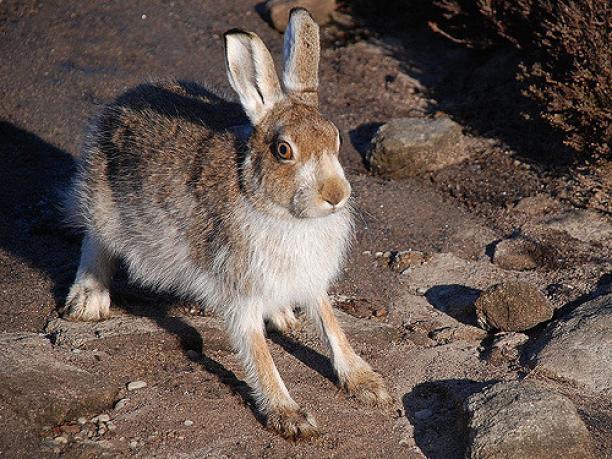 With hares on eastern Scottish moorlands at less than 1 per cent of what they were in 1954, questions about the ownership and stewardship of Scottish land are more pressing than ever

THAT Scotland’s mountain hare population is under threat is not, strictly speaking, news.

Compelling and often gruesome evidence of widespread culls has mounted in recent years, providing credence to the concerns of animal welfare groups and ammunition for the arguments of anti-hunting advocates. Yet the media attention brought to the issue by new research from the UK Government’s Centre for Ecology and Hydrology and the Royal Society for the Protection of Birds in Scotland (RSPB) is arguably unprecedented.

Dr Adam Watson, a 75-year veteran of research into mountain hares and the lead author of the study, commented upon the release of the new research: “Having counted mountain hares across the moors and high tops of the eastern Highlands since 1943, I find the decline in numbers of these beautiful animals both compelling and of great concern.

“We need the Scottish Government and Scottish Natural Heritage (SNH) to take action to help these iconic mammals of the hill. I hope they will listen to the voice of scientific research.”

Dr Watson’s call for the relevant authorities to heed the lessons of science is pertinent, since past experience has shown that the landowners and managers who operate Scotland’s grouse moors are disinclined to do so themselves.

The current favourite excuse for the mass-killing of hares is the attempted prevention of the louping ill virus, which has afflicted the red grouse population in recent decades, and has led to the intensification of hare culling from the 1990s onwards. The virus is spread by sheep ticks, and while there is some evidence to suggest mountain hares have also played a part in the transmission of the disease, scientific studies have found no compelling evidence that culls help prevent its spread.

Yet the preservation of animal populations from disease – saving them, so they can be killed in the preferred fashion – is not the only reason why mountain hares are under threat. Hunters hunt, and when it comes to Scottish mountain hares, there is little at present to stand in their way. Under current law, Scottish landowners can shoot mountain hares without a licence between August and February, with no restrictions imposed by the Scottish Government on how many hares can be killed in the open season. As a result, an estimated 26,000 hares are killed each year in Scotland, though in 2014 the number rose to over 37,000.

Yet despite the fresh attention being brought to the issue, this is not the first time hare culling has been the subject of controversy. In March of this year, the release of footage passed to BBC Scotland’s investigation unit by animal rights charities OneKind and the League Against Cruel Sports revealed gamekeepers on Scottish grouse moors in the Cairngorms using all-terrain vehicles to hunt and kill mountain hares. Despite being raised by the Scottish Greens at First Minister’s Questions and a declaration from First Minister Nicola Sturgeon that all options would be considered to prevent future culls, little action has been taken.

“This research is the final nail in the coffin for the Scottish Government’s policy of inaction in the face of relentless persecution of mountain hares on grouse moors.” OneKind director Harry Huyton

In October of 2017, a coalition of 10 environmental and wildlife groups – including RSPB Scotland, the Scottish Wildlife Trust, the Scottish Raptor Study Group, the Badenoch and Strathspey Conservation Group, the Cairngorms Campaign, the National Trust for Scotland, the Royal Zoological Society of Scotland, the Mammal Society and the John Muir Trust and Mountaineering Scotland – called for a temporary ban on all mountain hare culling on grouse moors, arguing that such culls threatened the species with local extinction. Again, no such temporary ban was instituted.

Green MSP Alison Johnstone, deputy convener of Holyrood’s cross-party group on Animal Welfare as well as Species Champion for the Mountain Hare and Brown Hare, commented at the beginning of this month: “Today marks the start of a season of shame across Scotland’s hills and moors, with a blind eye being turned to large-scale culling of mountain hares. Sporting estates’ belief that it protects grouse against viruses has no basis in science, so the failure to ban this horrific practice shows commercial interests are driving government policy.

“When I raised this issue with First Minister Nicola Sturgeon in March, she said she shared my concerns, would explore all options to prevent mass culling, and would hold urgent talks with gamekeepers. Did these talks happen? And what progress has been made on preventing culls?

“Scotland is a nation of animal lovers and outdoor enthusiasts and the public are fed up with the Scottish Government dragging its feet on animal cruelty and allowing our hillsides to be used for blood sports.”

Speaking to CommonSpace following the release of the latest research, director of OneKInd Harry Huyton said: “This research is the final nail in the coffin for the Scottish Government’s policy of inaction in the face of relentless persecution of mountain hares on grouse moors.

“Earlier this year, OneKind and the League Against Cruel Sports released grim footage of large-scale hare killing taking place in the Highlands. The First Minister agreed that the killing was ‘unacceptable’ and promised that the Government would review all available options to prevent mass culls. This process must now be urgently concluded so that Scotland’s iconic mountain hares are given the protection they need before the killing season peaks in the Winter. This is an urgent imperative if we are to both save this species and end the suffering that this brutal practice causes.”

The controversy echoed that of March 2016, when photographs were published by the Scottish investigative journalism platform the Ferret which appeared to show a mass-killing of mountain hares, again in the Cairngorms. At the time, conservationists argued that the relevant estates had breached an agreement reached in 2014 for a “voluntary restraint on large culls.” Again, no significant action was taken.

The practices surrounding grouse-shooting have also been implicated in threatening the Scottish populations of species far more endangered than mountain hares: in February, the RSPB Scotland reiterated its call for the driven grouse shooting industry to be licenced and for the right to shoot more closely regulated, following the suspected illegal killing of a golden eagle near Edinburgh.

The wildlife broadcaster and environmentalist Chris Packham commented after the disappearance: “Once again, we have the suspicious disappearance of a satellite-tagged golden eagle in an area managed for driven grouse shooting.”

In response to the resultant bad press, the Scottish Gamekeepers’ Association complained of “trial by media”, pleading innocence of the fact that a golden eagle had disappeared over an area reserved for the shooting of birds, and presumably allowing for the possibility that the eagle in question had disabled its own satellite tag, flown several miles out into the North Sea, and then committed suicide.

Mass-killings of animals are often an emotive issue, but despite the attention garnered by each of these controversies, it is difficult to avoid the impression that both the Scottish and UK Governments have tip-toed around dealing with the matter at hand, as well as the vested interests which allowed such practices to occur in the first place.

The Scottish Greens favour a complete ban on the killing of mountain hares, but as Green MSP Andy Wightman noted in the 2015 report ‘The Intensification of Grouse Moor Management’, there are other connected issues at play: While grouse shooting has been carried out in Scotland for over 150 years and historically linked to high levels of wildlife persecution, Wightman wrote, “a wider range of environmental impacts has emerged.

“These include carbon emissions, erosion, road building, lead accumulation, fencing, impacts on other wildlife populations and on the landscape. This has led to growing concern about the negative impacts of a land use that is subject to minimal oversight and regulation.”

When the journalist and campaigner Lesley Riddoch responded to the Ferret’s 2016 revelations by commenting that the hare culls summed up “quasi-feudal Scotland”, in which landowners are “untouchable”, Scottish Land & Estates chief executive Doug McAdam accused her of spreading “land reform propaganda.”

“The managers of these vast estates are merely stripping the land of everything that does not serve themselves. They would create a wasteland, and call it profit.” Common Weal head of research Dr Craig Dalzell

Scotland’s landowners have been notoriously touchy about the broad drive towards land reform since the advent of devolution; when the Labour-Liberal Democratic Scottish Executive put forward their own land reform bill in 2001, Robert Balfour, then convener of the Scottish Landowners’ Federation, described the bill as “expropriation by any other name”, while conservative critics made ominous (and somewhat unhinged) comparisons to Mugabe and Lenin.

Given that the Scottish landowning class has typically responded with hysteria to even the most timid suggestions of land reform, it might be worth asking what prevents the Scottish Government from taking more radical action – especially if the dangers and crimes of the present system remain the alternative.

Speaking to CommonSpace,  Dr Craig Dalzell, head of research at the Common Weal think tank, comments: “Scotland needs to have a serious conversation about the ownership and stewardship of our countryside.

“This latest attempt to extirpate the moorlands of anything that does not directly aid the sport of grouse shooting shows that far from preserving Scotland for the benefit of all, the managers of these vast estates are merely stripping the land of everything that does not serve themselves. They would create a wasteland, and call it profit.”

One of the arguments made by big landowners like the Buccleuch Estates is that there should be less talk about who owns the land and more about whether the owners are responsible custodians of it. The evidence here is that they are not.