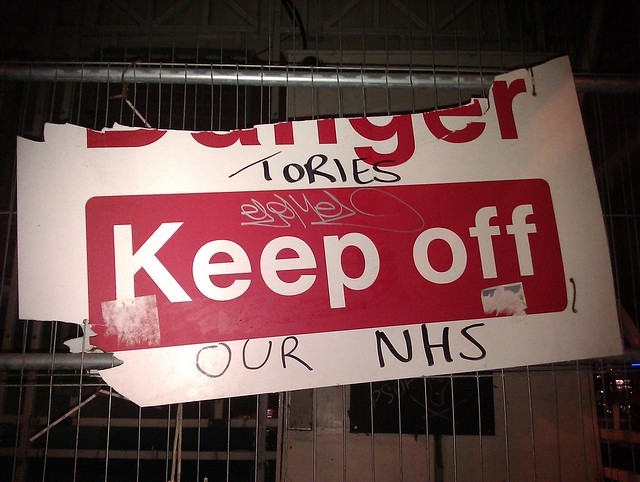 YOU can ignore most of what Donald Trump said today [4 June] in his joint press conference with Theresa May in London.

Most of it is utterly irrelevant as May will no longer be Prime Minister in just a few short days, and all the big substance issues between the two countries will thus have to be discussed all over again with the new PM. This State Visit is an elaborate, multi-million operation to stroke Trump’s ego.

A band of Tory leadership contenders (though not all) came out to quickly say the NHS would not be up for grabs in any trade deal they negotiated, but few will hear or care about their words, and why should they? Not only are they not PM, but who can trust a Tory PM’s word anymore after May anyway?

Given the fact that privatising the NHS in a trade deal with Trump would surely be electoral suicide for any Prime Minister of whichever stripe, it’s possible that this would be a red line in negotiations for the British side, but they’ld have to give up something else to keep billion-dollar American healthcare firms mitts off the NHS. Chlorinated chicken winging it’s way to a supermarket near you? The UK is in a weak negotiating position as it is, so there’s only so many areas it will be able to ring-fence when the Americans have the trading whip hand.

The reality is private companies have already had an increasing role in the NHS, and the healthcare services’ public funding shortfalls pushes more and more people towards private healthcare. The UK private healthcare market has expanded significantly in recent decades, while big Pharma continues to rake it in from the NHS.

More important than the facts is the narrative – the idea that the NHS is under threat from a trade deal between a rampaging Trump and a weakened UK is compelling. This is a narrative that Jeremy Corbyn will surely pick up on, but it’s also one that can be undoubtedly potent for the independence movement in pushing the polls towards Yes.

In 2014, Alex Salmond and Yes Scotland made a turn towards the NHS late on in the campaign, and there’s no doubt it had an impact on shifting the polls. Everyone can relate to the NHS, it’s one of the few cherished public institutions left and the sense that it’s been weakened in the age of austerity is widely held. Whereas the constitutional questions of Brexit and independence are abstract and divisive, the NHS is tangible and unifying.

Vote Yes to save the NHS was a good slogan in 2014. Vote Yes to save the NHS from Donald Trump is an even better one, as it sets Yes and the NHS up against the world’s no 1 bogeyman, and  after his comments today it rings true. Throw in the fact that many of the main candidates for Prime Minister have hatched their wagon to Trump, Boris Johnson and Jeremy Hunt being two obvious examples, then this is an opportunity for the independence movement that can’t be missed.

Many thought that Brexit itself would be sufficient to shift the polls to independence after the Leave vote in 2016. Polls over the past three years suggest that hasn’t been the case, or if it has it’s been minimal movement. The Stop Brexit message has an appeal to some who were previously No voters, but it’s no match for the huge swathes of Scotland – young and old – who would put protecting the National Health Service above just about any political issue. A summer indy campaign to save the NHS from Trump has a genuine chance of turning the dial to Yes.