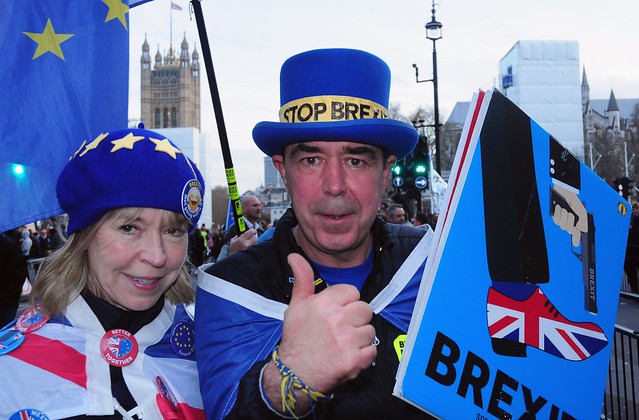 CommonSpace editor Ben Wray says likely European Parliamentary elections in six weeks time could be the beginning of a breach with two-party politics in England, with insurgency’s on the Remain centre and Brexit right.

WEDNESDAY’S EU Council is almost certain to grant the UK Government its extension – not the one the Prime Minister asked for, but one she’ll have to make do with.

A nine month or 12 month ‘flex-tension’ looks set to be offered by the EU 27, whereby Article 50 is extended until either the end of the year or March with the possibility to end it any time Britain likes by signing the Withdrawal Agreement which the UK Government and the EU have already thrashed out.

That’s another humiliation for the UK, but after so much of that over the last couple of mad months, it doesn’t feel like more embarassment really changes domestic political dynamics at all – if May were to be humiliated out of office, it would have happened long before now.

More significant is the additional time it will provide, and what the Tory party will want to do with that valuable political commodity. It could provide space to ditch May, have a Tory leadership election, then a General Election, get a new mandate and go back to Brussels with something different to say.

But there’s so many if’s and but’s in that last sentence that such speculation has little purpose. More useful is to look at what we can be pretty much certain is on the cards now: a European Parliamentary election in May. Both the Tories and Labour are quietly making preparations for such an event. Brenda from Bristol might have been spitting teeth about the idea of ANOTHER General Election, but now she’s going to have to trot down to the polling booth to vote in an election that isn’t that consequential at the best of times, but feels especially redundant when Article 50 is still in play and Britain still plans not to be part of the EU (add that to the humiliation check-list).

But while the election might have little point from a technical/legislative perspective, it will have a significant political consequence – so much so that the turnout will almost certainly be higher than the 35 per cent who voted in the last one five years ago.

Why will this election be politically important, I hear you ask?

Maya Goodfellow argues in The Guardian that the election “could be an opportunity to talk about all the things that we haven’t been focusing on because of Brexit”, saying it’s time to “step away from these torturous, well-rehearsed arguments and try something different”.

READ MORE: Analysis: A May-Corbyn soft Brexit deal makes a lot of political sense for both

That would be nice, but it would also be nice to try something different to war, poverty and ecological destruction – there’s about as much reason to think those things are just about to happen as everyone in Britain suddenly deciding that an EU parliamentary election isn’t about Brexit.

In the 2017 snap General Election, Corbyn managed to make what May wanted to be an election on delivering her Brexit about all the things that were wrong with Britain. But shifting the focus away from Brexit in a General Election is one thing – it’s entirely another in a European election, which even in a time before Brexit (remember that?) the question of the EU tended to lead to results you would never see in an election to govern the country. Ukip won the last EU Parliament elections in 2014 with 27.5 per cent of the vote, but failed to secure any MPs just a year later in 2015.

So the reality is that both Labour and the Tories approach an election in six weeks time which is set to be about Brexit with both parties in disarray over just that issue. But it won’t be their own dire results which will worry the blue and red party machines, it will be those of potential rivals on the Remain centre and Brexit right which could become impediments to winning a future General Election and, potentially, split their parties.

READ MORE: Analysis: With the capitulation of Boris and Rees-Mogg, the Tories are on course for their greatest humiliation

On the Remain centre, the ‘Change UK – Independent Group’ lead by Chukka Umunna and Heidi Allen will probably never have a better opportunity than this election to make themselves a relevant part of British politics. If one million marched for Remain in London just weeks ago, a Remain party consisting of pretty high profile former Labour and Tory figures, at a time when Labour can’t fully lay claim to the Remain side of the electorate and the Tories are fighting over what form of Brexit they want, then there must surely be a significant constituency who want to register a protest vote against Brexit in the European elections. Indeed, Change UK will seek to make it a proxy People’s Vote, with Change UK code for Remain on the ballot.

On the Brexit right, Nigel Farage’s new Brexit party is unashamedly set up to win Leave voters furious that there referendum win has not been followed through by the political class. There may be some movement from the Leave side towards boycotting the EU elections, but that will be over-ridden by “giving the Establishment a bloody good kick”, as Farage puts it. The determination to do so, even by otherwise diehard Tory voters who can’t countenance supporting a party with Theresa May as leader, should not be underestimated in the slightest.

These Remain and Leave party insurgency’s face the danger of their vote being split – between Change UK, Lib Dems and the Greens on the Remain side, and the Brexit Party and Ukip on the Leave side – but it’s likely that one force will emerge to consolidate the protest vote on each side, and my bet is it will be Farage and Umunna who come out as the leading figures of both.

Both these leaders have a strong interest in Brexit’s delay to kick-start their political careers again, ones that so easily could have been pretty much over – Umunna booted out at a General Election (which, naturally, he has steadfastly opposed) and Farage by Brexit’s delivery. Even if a reversal were to happen and Remain were to be delivered, they both would have probably been stuck in the political shadows – it’s only the ability to play on the anger and frustration of their respective bases about the limbo Britain is currently in that gives them political momentum.

But as it is, they could both emerge as significant figures after 26 May once the votes are counted – a batch of MEPs; money; profile; it will all help draw the media’s gaze and lead to a new round of speculation about defections from Labour and the Tories respectively. It could be the making of them, and the re-drawing of the political map.

Given the nature of the first-past-the-post system – which tends towards two party domination in a way proportional representation doesn’t – there is good reason to think that this is far fetched. History would suggest that as well. But Brexit is the sort of event that permanently disrupts the normal patterns of politics. The EU election results will not tell us for sure whether a new epoch of British party politics is here, but when the history books are written they may say that the EU parliamentary elections were the beginning of something genuinely new.

As for Scotland, the SNP – as the major Remain force in a country that is becoming ever more Europhile – will almost certainly have a good election day in May, while Ukip will do well to hold on to their one MEP. Brexit is England’s political revolution, not Scotland’s.

Donate to get the media YOU deserve