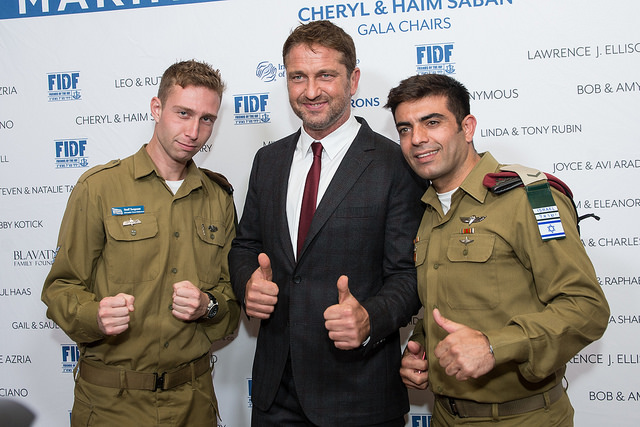 Scottish actor Gerard Butler fundraises for the israeli Defence Forces, but is also an official backer of Unicef and Red Cross, which carry out work to support those maimed or detained in the west bank and Gaza by the occupying IDF – can charities really permit such blatant hypocrisy?

On Tuesday [6 November], the Scottish actor Gerard Butler was once again in attendance at the Friends of the Israeli Defence Forces (IDF) charitable dinner.

The dinner raised a new record of $60 million from Hollywood’s great and good, including Butler, Ashton Kutcher and Pharrell Williams.

The money raised, naturally, goes to the IDF, not an organisation strapped for cash, given the nearly $4 billion of foreign aid which the Trump administration has lined up for the Israeli military in 2019 , much more than the US gives to any other country’s military in the world.

The IDF is also financed by this not so poor institution called the Israeli Government, and in total has an annual budget of $18.6 billion, over 6 per cent of the country’s GDP.

So you might think there’s charitable causes which need Butler’s celebrity endorsement more than the IDF, but then we haven’t yet looked at what this $60 million is likely to be spent on.

It could go towards that noble effort of child detention. 239 Palestinian minors are currently detained by Israeli security forces, including IDF, according to the Israeli human rights group B’tselem. Another celebrity, Gary Lineker, shared this video in December last year from B’tselem of Israeli soldiers detaining a child on the West Bank, describing it as “sickening”.

Israeli soldiers in Hebron bravely defend themselves from a number of existential threats disguised as defenceless Palestinian children https://t.co/8y8siZqHpf pic.twitter.com/Oc2ghZPUnt

Maybe Butler doesn’t have the West Bank in mind when he funds the IDF, maybe he’s thinking about Gaza, where the IDF enforced blockade has led to shortages in medicines and food. Earlier this year, the IDF went on a sniper shooting spree on the Gaza border, killing over 100 and wounding – most severely – over 13,000. 1,400 were struck by three to five bullets.

One of those killed, Razan al-Najjar, a Palestinian medic, had been interviewed by the New York Times earlier that month.

But you can’t use the same bullets to kill medics twice, you need new ones, don’t you Butler?

How does the star of 300 and The Bounty Hunter explain match up the IDF’s not-so-charitable work with his other charitable causes? Here’s the charities and foundations Butler is listed as being a supporter of:

That would be the same United Nations Children’s Fund which work includes monitoring “grave violations against children in Israel and the occupied Palestinian Territory”.

In June, Geert Cappelaere, UNICEF Regional Director for the Middle East and North Africa, wrote: “Over the past five weeks, five children were killed and hundreds were injured in largely peaceful protests in Gaza.

“Power cuts and shortages of fuel, medicine and equipment are straining an already fragile health system and complicating access to treatment for the injured.

“In addition to physical injuries, children are showing signs of severe distress and trauma.”

No country on the planet has broken more UN Security Council violations than Israel. There’s no way anyone could credibly argue Butler’s support for UNICEF and support for the IDF are not at odds with one another.

The same could also be said of Red Cross, which has criticised Israel’s attempts to block doctors and nurses entering Gaza and settlements support.

Or the Art of Elysium, which encourages artists to “dedicate their time and talent to children who are battling serious medical conditions”.

Or Artists for Peace and Justice, which Butler managed to provide a video for about peace and justice in Haiti with a straight face.

Either he doesn’t know the historic injustices of occupied Palestine, or he is not interested in his own total and complete hypocrisy.

He is also the key patron of Scottish Charity First Response, which is “committed to improving the response to emergency situations where patients present with a life-threatening situation”.

But presumably Butler wouldn’t want its efforts to extend to Gaza, where the IDF bombs hospitals, ambulances and prevents emergency fuel from reaching life-saving services.

Maybe Butler is just ignorant of all this. When asked while on a visit to Israel whether it has become more difficult to support Israel, he said: “I try not to get into politics too much, all I know is I love Israel and I love coming here, and I don’t worry about any kind of criticism, pro or negative or anything.”

But since he has been pictured having a hug with Israeli Prime Minister Benjamin Netanyahu and his family, this defense hardly rings true.

Regardless of whether he is playing dumb or he is an evangelist for IDF terror in the West Bank and Gaza, Butler should be made to worry, not least by the other charities he happily associates with.

Picture by Friends of the IDF