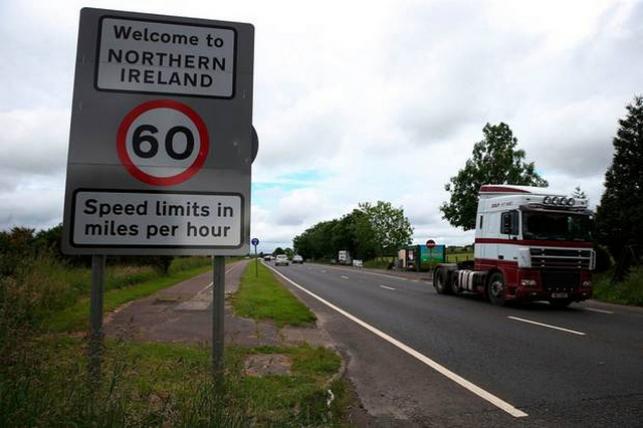 Boris Johnson’s first trip to Northern Ireland as prime minister ended with a stand-off over a referendum on Irish unification – what would it take for such a vote to happen?

NORTHERN IRELAND can relax. Boris Johnson, the peacemaker, has arrived.

The new prime minister has promised that, in his efforts to restore power-sharing to Stormont – which has been without a functioning government since 2017, since the collapse of talks between Sinn Féin and the DUP – he will act as an honest broker, free of prejudice or preference: “It’s all there in the Good Friday Agreement,” Johnson told journalists. “We believe in complete impartiality and that is what we are going to observe.”

Putting aside the fact that Johnson appears to have hastily gained a reverence for the Good Friday Agreement since March of this year, when he fulminated from the pages of the Daily Telegraph that the historic peace deal had given “dozens of wanted terrorists a get-out-of-jail-free card” – plus the fact that his assurances came shortly after he dined with senior members of the Democratic Unionist Party, without which his government cannot survive – it quickly became clear that such claims of impartiality come with qualifications.

Following her meeting with Johnson, DUP leader Arlene Foster helpfully explained that the prime minister had told her that, while he would act in a neutral fashion with regards to the governance of Northern Ireland, he would never be neutral on the Union.

“You shouldn’t confuse the two and today I have heard those two matters confused quite regularly,” Foster emphasised. “He’ll never be neutral on the Union and talk of a border poll was not something he was entertaining. So we look forward to working with the new Prime Minister to strengthen the Union.”

So, to recap: Boris Johnson will be completely impartial in his attempts to restore power-sharing between unionists and nationalists, while simultaneously striving to make sure that republican aspirations are frustrated at every turn and that British rule is never threatened by something as tawdry as democracy. This is all perfectly simple, and not at all contradictory.

At the risk of generalisation, it is fair to say that Northern Irish republicans are sceptical, to say the least. Despite Foster’s frantic grasping for coherence, so are some of her unionist colleagues. Prior to meeting with Johnson, along with representatives of the other main Northern Irish parties, DUP Jeffrey Donaldson acknowledged that the likelihood of a no-deal Brexit was “significant”, given the intractability of the Irish Government’s position on the backstop – a concern which Johnson can hardly claim he wasn’t warned about.

While the DUP has struggled to establish a position that unifies all of the things they won’t tolerate – anything that separates Northern Ireland from the UK’s economic sphere, anything that alters Northern Ireland’s constitutional position without consent, a no-deal Brexit, any concession to the Irish Government and, quite possibly, smiles and sunshine – the arguments of their Sinn Féin opponents have the benefit of clarity.

Scottish observers could be forgiven for seeing echoes of SNP rhetoric in Sinn Féin leader Mary Lou McDonald’s comments following the stand-off that concluded the prime minister’s visit. Brexit, and in particular a no-deal Brexit, “will be catastrophic for the Irish economy, for Irish livelihoods, for our society, for our politics and for our peace accord,” McDonald warned. “We’ve made it clear to him [Johnson] that the extensive planning that he tells us he’s carrying out in respect of a potential crash Brexit has to include the constitutional question and the issue of a border poll here in Ireland.

“We’ve stated to him very clearly that Brexit in any event – but certainly a disorderly Brexit – represents in anybody’s language a dramatic change of circumstances on this island. It would be unthinkable in those circumstances that people would not be given the opportunity to decide on our future together.”

Despite the level of press attention this possibility has attracted, McDonald’s remarks were little more than a reflection of Sinn Féin’s position since the EU referendum; the fact that the pro-Remain majority of Northern Irish voters had been ignored offers justification for a border poll on the reunification of Ireland.

In this, Sinn Féin have been broadly consistent. Under the Good Friday Agreement, the Secretary of State for Northern Ireland should call a border poll “if at any time it appears likely to him that a majority of those voting would express a wish that Northern Ireland should cease to be part of the United Kingdom and form part of a united Ireland.” This sets out a relatively clearer scenario than the SNP’s ‘material change of circumstances’ qualification for a second independence referendum.

In light of this, the 2016 call from the late Martin McGuinness – then Northern Ireland’s deputy first minister – that a border poll should be held in the aftermath of the EU referendum result was significant: Sinn Féin, who know the conditions of the GFA better than most, would not indulge in such demands unless they believed that mass support for such a plebiscite existed, and that they could win.

As time went on and the Brexit process became ever-more protracted, it appeared this opinion was shared beyond the ranks of Sinn Féin. In May 2018, reports emerged that then-Prime Minister Theresa May was doubtful about whether the UK would triumph if a border poll was held, leading to criticism from Sinn Féin’s Northern Irish leader Michelle O’Neill that May was “conceding that the Good Friday Agreement threshold for triggering a unity poll has been met” but was not prepared “to allow the people of Ireland, north and south, to exercise their democratic right”.

In July 2018, McDonald appeared to indicate that a border poll should not be held while uncertainty around Brexit persists, stating in a PA interview that Sinn Féin was in favour of a vote on reunification within the coming five years. However, judging by her statements this week, the increased likelihood of a no-deal outcome has only strengthened her resolve to press for a poll.

In a perfect world, the five year timescale would allow the relevant parties sufficient time to inarguably demonstrate the existence of majority support for such a vote. In the world we unfortunately live in, the person weighing this evidence will be the new Secretary of State for Northern Ireland Julian Smith, along with the prime minister he answers to, and it is unclear what precisely what would be necessary to convince them that the GFA threshold had been met. Opinion polls? Election results? Demonstrations on the streets? Considering that the Tory government relies on the DUP, they would also need to be persuaded – and given that some of their ranks have not yet been convinced by climate change and evolution, that’s a big ask.

As with the SNP, Sinn Féin has settled on the view that a Tory Brexit – particularly one careering towards an economically unpredictable no-deal – will prove to be a powerful motivation for voters when faced with the possibility of leaving the Union. Both parties believe that a mandate for fresh referendums is either already theirs or within their grasp. And yet, as with Scotland, that offers no assurances of a border poll taking place, whether it be in Sinn Féin’s preferred timeline or not.

Having ostentatiously appointed himself defender of the Union, Johnson has nothing to lose from shrugging off the mandates of his independence-seeking opponents. While a Section 30 order or a border poll remain in the gift of his government and ministers, while the likelihood of Brexit threatening the Union’s future grows, and while his unpopularity in Scotland and Northern Ireland should keep salesmen of flammable effigies in business for some years to come, refusal is the only effective weapon in the prime minister’s arsenal.

If this is likely to be the case for the duration of Johnson’s premiership, the question then becomes what it will take to end it, and what would happen next. There has been much speculation about the possibility of a deal between the SNP and a minority Labour government, but no more than that; anything more significant would require a major concession on Labour’s part regarding a second independence referendum, which few are placing bets on. As for Northern Ireland, despite how much as his enemies have delighted in painting Jeremy Corbyn as an IRA-sympathising traitor to the Crown, Labour have been carefully silent on the possibility of an Irish border poll, as have the SNP.

But if democracy is denied to the people of Northern Ireland, as it was so infamously to Catalonia, that position will no longer remain tenable for either party.