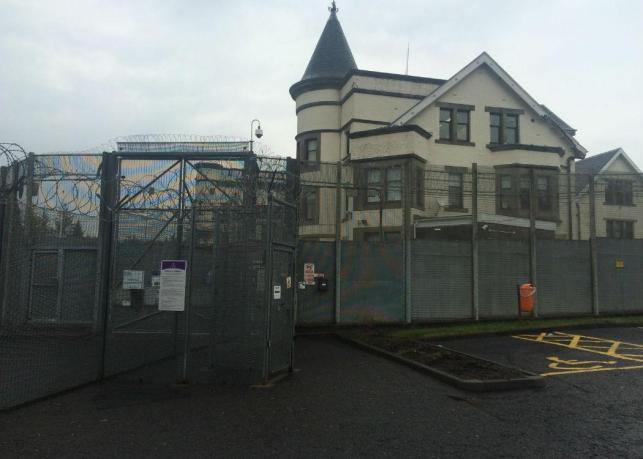 The notorious detention centre has been condemned as an affront to human rights for almost 20 years; what will it take to finally be rid of it?

THAT Dungavel Immigration Removal Centre is housed around a retrofitted Victorian hunting lodge, where the Duke of Hamilton would once spend his summers, is oddly appropriate.

Since its repurposing in 2001 as a holding facility for refugees and asylum seekers awaiting deportation – the only one of its kind in Scotland – it has often felt like a relic from the past, which critics would argue has no moral right to exist in the 21st century.

Quite recently, it seemed as though hopes of Dungavel being consigned to history were going to be belatedly fulfilled. In September 2016, the UK Home Office announced that it was planning to close the detention centre towards the end of 2017, replacing it with a new purpose-built facility near Glasgow airport.

Speaking at the time, then-UK immigration minister Robert Goodwill made it clear that this plan did not emerge out of respect for human rights concerns, but as a means of effecting deportations with greater speed and convenience: “The new short-term holding facility would provide easy access to London airports, from where most removals take place,” said Goodwill, “meaning those with no right to be in the UK can be removed with less delay.

“Closing Dungavel immigration removal centre as a consequence fits with that approach and will result in a significant saving for the public purse.”

“It’s time for the huge amount of money spent on detaining people –much of which goes to private security firms – to be redirected into supporting integration in local communities and helping people in need of protection.” Pauline Diamond Salim, Scottish Refugee Council

Speaking at the time on behalf of the Scottish Government, which under the SNP has long campaigned for a more “humane” replacement for Dungavel, then-communities secretary Angela Constance questioned the need for the new facility, saying: “By introducing a rapid removal facility there is a real risk that people who have been living in Scotland will either have their opportunities to challenge their deportation restricted or be taken to immigration removal centres far away from their families, friends and legal representation.

“This move could make it considerably more difficult for them to pursue their cases and have serious impacts on their mental health.

As it turns out, this would all prove to be academic. Renfrewshire Council quickly rejected the application for a replacement facility, forcing the Home Office to backtrack; the celebrations of protestors were premature, and Dungavel remains with us to this day, stubborn and unshakeable, sustaining itself through the successive governments that legitimise it and a political climate that, despite bouts of outrage, continues to normalise it. It is difficult to think of a more fitting physical embodiment of a “hostile environment” than Dungavel.

This was further demonstrated by CommonSpace’s report on Monday on the case of Adel Aboulkacem, originally from Tunisia, who has been living in the UK for fifteen years and has two children with a UK partner, and is now detained in Dungavel. Aboulkacem recently abandoned a hunger strike ahead of an appeal, but confirmed to CommonSpace that he had received no response from the Home Office regarding his calls for better treatment and urgent medical care.

“What can I do?” asked Abdoulkacem. “They are killing me here. They are keeping people for a long time here, for no reason. Any other country in Europe, it’s three months. Here it could be weeks, months, years. I know one man here who is four years in detention, it is ridiculous, he has two kids.”

Asked for comment on Aboulkacem’s case, a Home Office spokesperson told CommonSpace: “Detention and removal are essential parts of effective immigration controls, especially in support for the removal of those with no lawful basis to stay in the UK.

“We take the welfare of our detainees very seriously and any detainees who choose to refuse food and fluid are closely monitored by on site healthcare professionals.”

“This form of detention is harmful to people’s health and wellbeing, as well as their ability to integrate into the community following release.” Scottish Government spokesperson

After being made aware of Aboulkacem’s current plight by CommonSpace, the Scottish Government – which has little influence over Dungavel, with powers over immigration and asylum reserved to Westminster – reiterated its long-standing position, commenting via a spokesperson: “We have repeatedly raised concerns about issues at Dungavel, and have long campaigned for its replacement in favour of community-based solutions.

“This form of detention is harmful to people’s health and wellbeing, as well as their ability to integrate into the community following release.

“We continue to press the UK Government to deliver more humane and flexible asylum and immigration systems.”

Scottish Labour MP for Glasgow North East Paul Sweeney also commented: “A number of recent immigration and asylum cases that I have been dealing with in my constituency have made it clear that the Home Office’s hostile environment policies strike at the very heart of our values of compassion and dignity as a nation.

“The Home Office’s hostile environment policies strike at the very heart of our values of compassion and dignity as a nation.” Labour MP Paul Sweeney

“In particular trafficking victim Duc Ngyuen – who was detained in breach of Home Office guidelines – described his detention as ‘worse than being in prison’.

“We need an urgent national review of detention practices and the condition and suitability of Home Office detention centres.

“Certainly there should be no grounds for detaining and separating families while they are awaiting an appeal.”

Pauline Diamond Salim of Scottish Refugee Council highlighted the fact that criticism of the UK detainment policies has been consistent in its condemnation, telling CommonSpace: “Detaining people for immigration purposes causes many more problems than it can ever hope to solve. Report after report shows the serious and long-term impact it can have on people’s health, particularly mental health. And it’s not just the individual who is locked up who suffers. Partners, spouses and children who are not detained are separated from their loved ones with no idea how long the separation will last.

“It’s time for the huge amount of money spent on detaining people –much of which goes to private security firms – to be redirected into supporting integration in local communities and helping people in need of protection to settle and rebuild their lives here.”

The campaigners who have doggedly agitated for Dungavel’s closure over the course of two decades seldom have to wait long for fresh evidence to back their protests – but given that the unloved institution has survived so many previous scandals and controversies, they could be forgiven for wondering what another one will do?

For the first decade of its existence, much of the criticism around Dungavel focused on the detainment of children and even babies, with over 100 being held there between October 2008 and September 2009 (although the UK Government suggested some children may have been counted twice, which did not add credence to their claims that they were closely monitoring the welfare of child detainees).

The Kurdish Ay family, which consisted of mother Durdugal Ay and her four children, aged between 7 and 14, were held in a single room in Dungavel for 13 months before eventually being granted asylum in Germany. In 2003, lawyer and human rights advocate Aamer Anwar launched a campaign over the detention of the Ays, who were reportedly paid a six-figure settlement in 2012 following a civil action against the UK Government.

Following criticism from opposition parties, Scotland’s churches and former Children’s Commissioner Kathleen Marshall, the practice of child detainment was curtailed in 2010. But that did not mark the end of Dungavel’s troubles.

In 2011, it was revealed that the GEO group – which manages the infamous Guantanamo Bay Migrant Operations Centre, as well as numerous privatised prisons throughout the United States, had won the £35 taxpayer-funded contract to manage Dungavel for the next five years, despite allegations of human rights abuses, sexual assault and negligence at its other facilities.

Speaking at the time, then-Glasgow Central MP Anas Sarwar said: “The Scottish people will be horrified by this decision.” And many were – but it did not stop the contract going ahead.

READ MORE: Behind the Wire: Inside Dungavel – an exclusive short film

In December 2017, a report from the doctors’ union the British Medical Association (BMA) argued that facilities such as Dungavel should be phased out, citing concerns over management of mental health problems including depression, anxiety and post-traumatic stress disorder (PTSD) amongst detainees. This expert recommendation was ignored by the Home Office, and the UK Government itself.

However, the issue of detainee welfare returned when the Sunday Herald newspaper revealed, following a Freedom of Information request, that in one month of 2017, 20 out of 145 Dungavel detainees were monitored for being at risk of self-harm. Between January and August of that year, out of an average of 130 detainees each month, nine were on suicide watch.

These revelations followed the news that 2017 had seen the highest number of deaths of detainees on record. Of the eleven recorded deaths, one included that of a Chinese national, reported by CommonSpace.

Most recently, in January of this year, fears around the GEO group – which contributed hundreds of thousands of pounds to the presidential campaign of Donald Trump – were further confirmed when it was revealed they were paying asylum seekers held at Dungavel just £1 per hour in wages for work within the detention centre, such as cleaning and gardening.

Lawyer Toufique Hossain of the law firm Duncan Lewis said at the time: “Our clients and other detainees are doing work essential to the management of the immigration removal centres like Dungavel, much of it banal and tiring. They are working as cleaners, barbers, laundry workers, litter-pickers and food servers. This work would otherwise need to be done by workers paid at least the minimum wage.”

“Men and women deprived of their liberty, in a position of powerlessness, are forced to carry out unedifying jobs for next to nothing by the circumstances which have been imposed on them. If this isn’t slavery, I don’t know what is.”

Each of these controversies gained widespread press attention, provoked protest, and confirmed the inhumanity of Dungavel’s existence. And each and every time, minor victories aside, the controversies died away, and Dungavel endured.

In the run-up to the 2014 independence referendum, the SNP pledged that they would close Dungavel, should Scotland become independent. At this point, it is unclear if any other eventuality could effect that final, necessary change.