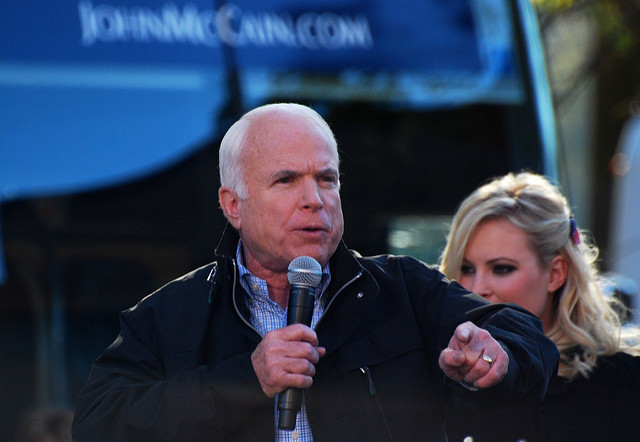 AS WAR HEROES GO, he was overrated.

The nation he fought for may have achieved some victories, but lost far more in their pursuit, only winning wars at the expense of morality, rendering itself corrupt and murderous in the process. He was entirely willing to allow untold numbers of his fellow countrymen to die in those wars he considered necessary, on the logic that geopolitical goals can be accomplished by throwing as many live bodies as required towards violence – violence that, more often than not, he himself had a hand in orchestrating.

Despite how appropriate they might be, these opinions are not derived from any of the fulsome appraisals of the late John McCain, US senator and serial presidential candidate, which have appeared since his death at the age of 81 on 25 August. They originate in another obituary, written by McCain himself in 2013, upon the passing of the legendary North Vietnamese general Vo Nguyen Giap, the ‘Red Napoleon’ commonly regarded as one of the greatest military strategists of the 20th century, who led the People’s Army to victory over both France and the United States.

“The U.S. never lost a battle against North Vietnam,” McCain grumbled, “but it lost the war. Countries, not just their armies, win wars. Giap understood that. We didn’t. Americans tired of the dying and the killing before the Vietnamese did. It’s hard to defend the morality of the strategy. But you can’t deny its success.”

There are more than a few critiques that could be made of McCain’s analysis – his unthinking acceptance of the embittered trope that the US somehow betrayed itself by being insufficiently enthusiastic about feeding thousands of its young into a meat-grinder; the shameless hypocrisy of talking about North Vietnamese moral failings, as if Mỹ Lai and Agent Orange were mere unfortunate peccadillos; the implicit assumption that an admiral’s son with a habit of crashing aircraft was equal to the man who directed a defiant nation to victory against every obtuse empire that underestimated them.

In an acidic response, the Vietnamese newspaper the Thanh Niem News summed it up better than most: “Asking McCain to write the last words on one of the greatest military tacticians in history is like asking the kid who repeated the ninth grade twice to give your school’s valedictorian address.”

Reading it again today, the relevant point of McCain’s backhanded tribute to his former opponent – who, McCain bragged, welcomed him back to Vietnam in the early 1990s as an “honorable enemy”, and who McCain embraced in an effort to reconcile their respective nations (evidently putting aside his own lifelong, self-proclaimed hatred of “the gooks”) – is that the self-styled maverick evidently had no problem finding fault with the dead.

Since his passing, many of those eulogising one of the Grand Old Party’s grand old men feel a different, more forgiving standard should be adhered to – in his case, at least. For proof, witness the outraged reaction to comments made by Vox politics editor Laura McGann, who argued shortly after McCain died: “Today, I’m told, we should pretend John McCain didn’t pick Sarah Palin as his running mate in 2008.”

The rage McGann elicited is all the more disproportionate and unjustified, considering that she had barely touched upon the wealth of justifiable criticism which could be levelled at the late senator.

READ MORE: The return of Blair and Bolton: How liberal interventionism made an unlikely revival

Throughout his political career, McCain voted against recognising Martin Luther King Day, imposing sanctions against Apartheid South Africa (on six separate occasions), gay marriage, LGBT adoption and civil unions. Predictably however, there has been less discussion in recent days of a ‘maverick’ so unpredictable he reliably aligned with traditional conservatism for decades on end, than that one time he corrected a racist supporter by pointing out Barack Obama was not, in fact, an Arab – he was a “decent family man”.

Some of those offering tribute to McCain’s legacy are surprising, or at least disappointing: many American progressives were left saddened by democratic socialist darling Alexandria Ocasio-Cortez describing McCain’s life as an “unparalleled example of human decency and American service,” though the more cynical among them recognised the political expediency of not dancing on a fresh grave while heading for Congress. In Scotland, a similar calculation may or may not have occurred to First Minister Nicola Sturgeon, who advised we turn to the final page of McCain’s memoirs, in which he can be found missing the point of a Robert Louis Stevenson poem.

Some were more evident in their sincerity: it is somewhat understandable that Stewart McDonald – the SNP defence spokesperson and Cold War revivalist who is hardly the most vocal defender of his party’s well-deserved anti-interventionist credentials – would hail McCain’s as a “rich life that many will learn from for generations to come.” McDonald’s not even necessarily wrong – learning is the point of a cautionary tale.

McCain’s vaunted status as a thoughtful moderate, so often invoked by the plaudits he received both in life and death, repeatedly depended upon illustrative points of comparison: becoming senator for Arizona in 1986, McCain succeeded Barry Goldwater, whose intense relaxation about the use of nuclear weapons even frightened other Republicans; in 2000, McCain’s persona took on an intellectual sheen when placed alongside his fellow contender for the party’s nomination, George W. Bush (although, in a sign of things to come, this did not appear to count as a virtue in the minds of Republican voters). In 2008, he chose Sarah Palin as his running mate, a bizarre spectacle which some have argued laid the groundwork for the present occupant of the Oval Office – or demonstrated that the seeds of the alt-right were in bloom within the Republican Party long before Trump arrived.

Nevertheless, for some, symbolic gestures matter more than history. If current trends hold, McCain will be remembered – by people with poor memories – as a principled critic of Donald Trump, despite doing precisely nil to effectively oppose his administration’s agenda. Noting that McCain had requested a eulogy for his funeral from former president Obama, who soundly beat him in the race for the White House in 2008, Politics.co.uk editor Ian Dunt wrote on Twitter: “A reminder of the kind of decency and civility which now seems absent from public life.”

It is a foundational myth of today’s beleaguered, self-identified ‘moderates’ – of the kind McCain disguised himself as, with varying degrees of success, for years – that it was once and should again be possible to find decisions, actions and ideologies of certain individuals repellent and unconscionable, and yet still treat these people with respect, or at least a pose of civility which masquerades as such. Of course, the central difficulty of this and always has been the impossibility of respecting some without insulting others.

McCain’s family grieve now; to suggest that their grief should be respected is not automatically an outrageous notion. But the idea that such respect should come at the expense of history, or the profession that supposedly writes history’s rough draft, cheapens the very concept – particularly when such reverence and sanctification was never afforded to those many, many people whose death McCain had a hand in, or those they left behind.

Obviously, McCain was a lot more successful in advocating for wars than he was at winning them – another difference between him and Giap. Aside from America’s historic humiliation in Vietnam, the many disastrous, still reverberating conflicts for which he has acted as cheerleader – from Afghanistan to Iraq to Libya – have created some interesting new definitions of ‘victory’. Then again, McCain was not a man to be bothered by deathtolls.

Still, who knows? Should the Trump administration posthumously grant the dearest wishes of McCain’s winter years and pursue military intervention in Syria and Iran, maybe it’ll all be over by Christmas. Bookies are standing by to take your bets.

How will history record John McCain? How does it usually record failed presidential candidates whose reputations stood at odds with their voting records and patterns of behaviour? If McCain is saved from the footnotes, it will hopefully be his actual record, rather than the efforts of amateur hagiographers, that stand in testament to his dubious achievements.

In their rhetorical evisceration of McCain following his obituary of Giap, the Thanh Niem News quoted the general on what his career had taught him: “Any forces that wish to impose their will on other nations will face failure.”

That, the newspaper decided, was something that might look good in McCain’s obituary. “Or on his tombstone.”