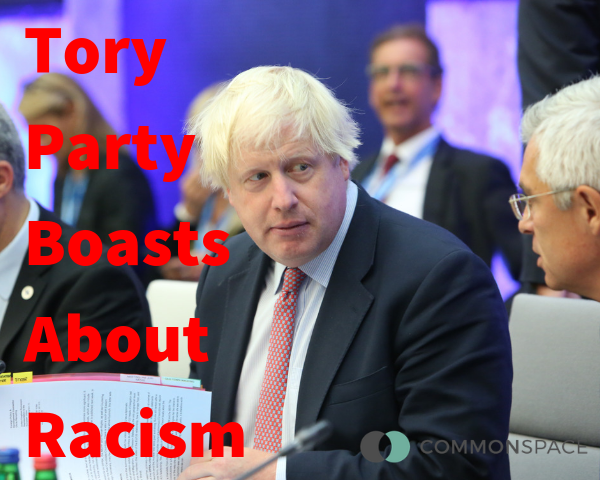 THE Tory party Islamophobia scandal has reached crescendo with the UK Government’s decision to reject a Westminster cross-party working group definition of Islamophobia backed by more than 750 Muslim organisations.

The definition recognises Islamophobia as a form of racism, and will be debated in the House of Commons today (16 May).

Whatever rightwing circles insist about a threat to ‘free speech’ or claims that the definition will hamper the security state’s ability to crackdown on ‘terrorism’, this is a calculated move by a desperate government to shore up support.

Dog whistle your heart out

Demands for an independent inquiry into Tory party Islamophobia have haunted Theresa May throughout her leadership.

An increasingly exasperated former Conservative party chair, Sayeeda Warsi, has raised the alarm on the party’s Islamophobia time and again, warning that that it has become “poisoned” by anti-Muslim racism.

It is indeed pervasive in the party. An investigation by the Times in 2018 found that Tory councillors, officers and party agents were members of anti-Muslim Facebook groups.

Boris Johnson, whilst still Foreign Secretary, compared Muslim women to “letterboxes” and “bank robbers”, something he was able to do without fear of censure, and with an eye to his leadership ambitions.

But calls for an inquiry by over 350 Mosques and scores of Muslim and civil liberties groups have not only been ignored by party leaders. The party has responded by ramping up the rhetoric.

Leading on from its widely condemned and Islamophobic 2016 London Mayoral Campaign, the 2020 campaign is headed by Shaun Bailey, who shared social media attacks on “mad mullah Khan of Londonistan”.

Commons leader Angela Leadsom has said that the definition ought to be a matter for the Foreign Office, a clear suggestion that the rights of British citizens ought to be the concern for a foreign policy ministry.

Ruth Davidson and the Scottish Conservatives have adopted the Islamophobia definition as all Scottish parties have.

But they won’t dare challenge the UK party leadership on its institutional racism, and instead join the ranks of leading party members ignoring pleas for an inquiry.

During the ‘War on Terror’ these institutions, goaded on by circles of ‘liberal’ pro-war writers and intellectuals, normalised paranoia and fear about Muslims, and the state cracked down on the civil liberties of Muslims including extensive programmes of state surveillance and widespread criminalisation.

In recent years reactionary rightwing forces across Europe picked up on this ‘racism from above’ to rehabilitate their wider reactionary ideologies.

Centre right parties have had to run to catch up to stop the erosion of the most reactionary sections of their voter base. The UK Tory party has a special impetus to behave in this way, with the torture it is suffering under Brexit.

In both EU and Westminster election polls, the Conservative vote is evaporating at an astonishing speed. There can be little question the decision by the government to opt-out of the Islamophobia definition is directly related to this fact – though this kind of appeal to racist sentiments is unlikely to stem anger over the party’s failure to deliver Brexit.

But it’s no accident that the Islamophobia dog-whistle hits the right note.

Of course, in the ideal of a liberal democracy, bigotry is kept in check by institutions that mediate this kind of behaviour.

You’d think some of those institutions were hyperactive after the last couple of years, which have seen Jeremy Corbyn subjected to an endless slew of confected accusations of antisemitism, solid evidence for which has never appeared.

But the Tories have learned, in the Pavlovian fashion, that there is almost nothing they could say sufficiently racist about Muslims to cause the same interest from the media.

Instead every slander from a Tory politician is treated as a fresh attempt for the same media to host a public ‘debate’ about the Muslim community and their need to be subjected to the rigours of ‘free speech’. In this way, large parts of the media actively feed the Conservative party’s project of constructing a reactionary base.

When Tory Islamophobia has backfired, it has been because of public anger. Zac Goldsmith’s torrid campaign, that sought to foster divisions between London’s Hindu and Muslim communities and paint Sadiq Khan as an Islamist extremist was crushed at the ballot box.

That is the kind of popular and principled anti-racism that can stop this behaviour.