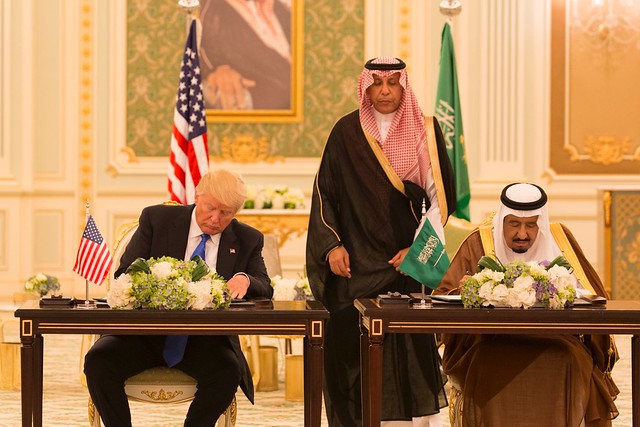 It takes an exceptional degree of western cognitive bias to not see that it is the United States that is the bully, the aggressor and the international-law breaker in this conflict, not Iran

WHO do you believe, the US or Iran? Donald Trump or Hassan Rouhani? For much of our western-bias media, the question never enters their head. They can accuse Trump of all manner of lies on personal or domestic issues, but when it comes to the word of the US President versus Iran’s, it’s no contest – the guy standing in front of the red, white and blue starts and stripes wins every time.

It’s that mentality which leads the political editor of Rupert Mudorch’s The Sunday Times, Tim Shipman, to accuse Jeremy Corbyn of siding with the “theocratic terrorists” for calling on Britain to “act to ease tensions” and calling for “credible evidence” that Iran attacked oil tankers in the gulf.

Shipman tweeted: “Brexit party leading, Tories assembling a circular firing squad, Change UK imploding: “What should we do to capitalise on this propitious situation?” “Blame America, speak up for theocratic terrorists and dismiss credible evidence from our intelligence partners?” “That’ll do it…””

Conservative renegade Peter Oborne described Shipman’s analysis as “grotesquely unfair”, but fairness really has little to do with it – Shipman was merely parroting the standard British establishment response to any questioning of its now ingrained foreign policy of “always with America, right or wrong”. The Germans have questioned the evidence, the Japanese have questioned the evidence, even Nancy Pelosi, speaker of the House of Representatives, has questioned the evidence. But Shipman wants us all to fall in line with a US regime known for its lying, known to be seeking to ratchet up tensions with Iran, with Iraq and the WMD’s that never were still fresh in the memory.

When it comes to track records, any sober comparison would see the Iranians are far less warmongering. In fact, when Houssani stated on Tuesday that “Iran will not wage war against any nation”, he spoke from a position of credibility. Iran – unlike almost all of its neighbours – has not started a war in modern history. It has a military budget as a per cent of GDP of less than 3 per cent, compared to 8.8 per cent for Saudi Arabia and 4.4 per cent for Israel (and that’s minus all the US military aid they receive).

It’s almost certainly the case that if the bombs begin to fall, it will be Washington, not Tehran, which drops the first one. The US has been at war 222 years out of 239, and currently drops one bomb per 12 minutes in its military escapades. It has a military spend larger than the rest of the world combined, and Trump is flanked by Secretary of State Mike Pompeo on the one side, the former CIA chief who proudly announced earlier this year that in that role “we lied, we cheated and we stole”, and national security advisor John Bolton on the other, who was literally involved in drawing up the fake evidence of WMD’s to present to the UN in justifying attacking Iraq.

And then there are the hard facts of how the Iran Nuclear Deal was cancelled. A legally binding agreement signed in 2015 by the US, UK, France, China, Russia and Germany which tied Tehran to limits on its uranium enrichment in return for the lifting of sanctions. Iran was compliant with the Deal when Trump’s regime unilaterally ripped it up in May last year, in defiance of all other signatories and in breach of international law. Trump then enforced new sanctions on Iran and demanded the rest of the world join in, or else they too will feel the brunt of the sanctions in trading in the United States and using the Dollar. Predictably, corporate Europe has more-or-less towed Washington’s line.

After such brutish behaviour, we now have the spectacle of the US complaining that Iran plans to increase uranium enrichment beyond the Nuclear Deal limits later this month, and demanding to know what everyone else is going to do about it. Frankly, given the threats from the US and its allies in the region, and given the fact that Tehran entered a legally binding agreement that has now been torn up and is suffering under sanctions as a result, would it be any wonder that they would move towards establishing a nuclear weapons capacity, fully aware of Israel’s not-so-secret nukes 2000 kilometres away?

It’s Benjamin Netanyahu’s brutal Israeli regime and the despotic Mohammad Bin Salman of Saudi Arabia that is egging Trump, Pompeo and Bolton on most. Two leaders who respectively have so little regard for international law that they will colonise another country and behead a Washington Post journalist on Turkish soil. Trump has been so willing to cosy up to Israel’s law-breaking that Netanyahu has named an illegal settlement in the Golan Heights after him: Trump Heights. After threatening action on Saudi Arabia’s murder of Jamal Khashoggi in an embassy in Ankara, which his own intelligence services said was carried out on the orders of Bin Salman, the US President decided to do nothing. Too many arms to be sold to Riyadh to do anything about murdering journalist’s in cold blood, you see.

This is the cold hard truth of this conflict: one side is the bully, the aggressor and the international-law breaker, the other side is Iran. We’d call the US a rogue state, except that term is only for its enemies, isn’t it?